Condensed matter physics is one of Hiroshima University’s strengths

I started my career as a researcher in the field of physics at Osaka University. Following a period at the University of Tokyo, I took up a post at Hiroshima University in 1999. After almost 20 years of being engaged in research here, I have recently realized anew that physics is one of Hiroshima University’s fields of excellence.

Let us look at some specific statistical data. “Qualitative and Quantitative Indicators for Japanese Universities in the Field of Physics (2009-13),” which was published by the Ministry of Education, Culture, Sports, Science and Technology (MEXT), ranks Hiroshima University as high as eighth within Japan in terms of its share of the number of global publications. The university received particularly high praise for its achievements in the field of condensed matter physics, which explores the properties of high-performance materials. We are also positioned among the top universities in terms of the number of top 10% publications worldwide, which is an indicator of the quality of research.

While Hiroshima University has long had many researchers playing leading roles on the front line of physics, including members of the Graduate School of Science, Graduate School of Advanced Sciences of Matter, and Graduate School of Integrated Arts and Sciences, there was previously no organization that bound them all together into a cohesive whole. Fortunately, in 2013, Hiroshima University was selected for inclusion in MEXT’s Program for Promoting the Enhancement of Research Universities. Momentum for the creation of a world-class research center within the university built up and 2017 saw the launch of the Center for Emergent Condensed-Matter Physics at Hiroshima University, of which I serve as director. Through this, we put in place a framework for intra-university collaboration. 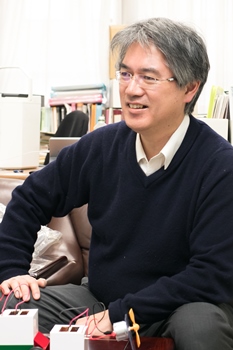 The Hiroshima Synchrotron Radiation Center helps to support our research. It is Japan’s only synchrotron radiation experimental facility at a national university. It has the world’s only dedicated accelerator, which mainly produces ultraviolet and comparatively long-wavelength X-ray radiation. This enables us to study the movement of electrons within substances, providing clues that help to shed light on the properties of those materials. These days, about 30% of users are researchers from overseas, who provide our young researchers and students with tremendous inspiration via the resultant international exchange.

Massless electrons are a current research trend in the world of condensed matter physics. Electrons usually have mass and travel comparatively freely within solids. The faster the movement of electrons within a solid, the easier it is to develop such devices as PCs with high-speed processing capabilities. Through our experiments at the Hiroshima Synchrotron Radiation Center, my research group has succeeded in discovering new massless electrons, among other achievements. 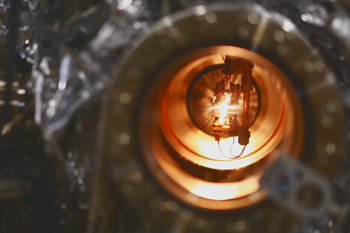 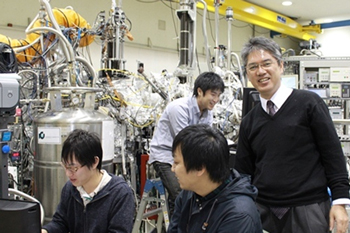 I have watched the growth of dozens of hardworking students

It is not only the faculty members and facilities that make Hiroshima University such a great place. I also think that the honest diligence and potential of its students are splendid. They always do what I tell them immediately, without stopping to think about how it benefits them directly. We have great students who are the kind of people who get things done. While they might be rough around the edges initially, I can see them grow as we go through repeated rounds of guidance and communication. Even students who love physics but have an aversion to using English gradually start to produce papers in decent English after going through the START Program of short-term study abroad in their first year, followed by interaction with international researchers at the Hiroshima Synchrotron Radiation Center and experience of international academic conferences.

Some of our students can boast achievements to rival those of distinguished researchers, such as the discovery of an ideal topological insulator*, which was a world first. It is also encouraging to see that many of our alumni have gone on to achieve success, whether as researchers at other universities and research institutes or as science journalists.

*A special material that is an insulator, but whose surface is capable of conducting electricity like a metal.

A treasured memory for Professor Kimura, pictured with his tutee Kenta Kuroda (now an assistant professor at the University of Tokyo), who was the first in the world to discover an ideal topological insulator. The model diagram used to illustrate the concept employs a photograph of Saijo IC, the nearest expressway interchange to the campus.

Specializes in condensed matter physics. Recent research focuses on spin-electron states in substances using synchrotron radiation. Has discovered a number of new topological insulators since 2010. His article shedding light on the mechanism behind the magnetic properties of topological insulators was published in British scientific journal “Nature Communications” in 2015.