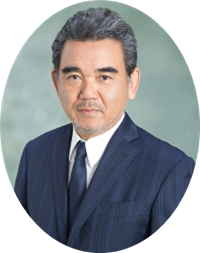 I would appreciate your support. Hiroshima University has maintained the founding principle of “a single unified university, free and pursuing peace,” and with its 11 faculties and 11 graduate schools, it has achieved significant development as one of the most distinguished research universities in Japan under the following five guiding principles: “the pursuit of peace,” “the creation of new forms of knowledge,” “the nurturing of well-rounded human beings,” “collaboration with the local, regional and international community” and “continuous self-development.”
Hiroshima University has been selected as one of the 13 Type A (top type) universities under the fiscal 2014 program to support the creation of super global universities. It is the only university in the Chugoku/Shikoku region to be selected as such. Hiroshima University aims to become one of the global top 100 universities within the next 10 years by continuously producing global talents and creating knowledge while promoting university reforms centering on the twin pillars of educational and research capabilities.
While modern society has achieved remarkable progress in science and technology, it faces a number of difficulties, including the frequent occurrence of natural disasters, the widening gap between rich and poor people, and recurring regional conflicts and acts of terrorism. Hiroshima University will do its utmost to foster “peace-pursuing cultured individuals with international experience” who are ready to tackle heretofore unknown challenges.