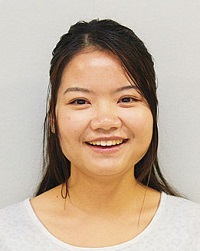 Born in Nanning City, Guangxi Zhuang Autonomous Region, China. Studied Japanese at Guangxi University for four years, and then decided to study Japanese culture in Japan. Enrolled in a master's course of the Graduate School of Letters, Hiroshima University, in October 2008, and went on to study at a doctoral course in October 2010. Majors in the history of Japanese costumes, especially the junihitoe, a layered kimono worn by court ladies in the mid- to late Heian Period. Hopes to become an instructor at a university in China and teach Japanese and Japanese culture.

Located in the southern part of China, Guangxi Zhuang Autonomous Region is theautonomous region of the Zhuang people, whose population is the largest of the 55ethnic minorities in China. Vahcuengh belongs to the same language family as Thaiand Lao (the official language of Laos), and thus shares similar pronunciation andgrammar. One of the renowned sightseeing destinations is Guilin.Nanning City, the capital of the region, is located in a subtropical zone, with littledistinction between its four seasons. As indicated by the city's flower the hibiscus, Nanning enjoys a tropical atmosphere and stays green and verdant throughout theyear, resulting in its nickname the “Green City.” Since 2004, the city has annually hosted the China-ASEAN Expo, expanding the city's presence as a core base for deepening trade interaction with Southeast Asian countries.

27 Hours by Train to Take an Entrance Examination

Majoring in Japanese at Guangxi University, I studied about Japan for four years. My interest in Japanese culture developed gradually, until I learned through one of my teachers that the Beijing Research Center of Hiroshima University was inviting admission applications from international students. At that time, I was a junior at university. I went to Beijing twice to take an entrance examination. Although it took me as many as 27 hours from home by train, I successfully passed the examination. Hiroshima University has a spacious campus with beautiful scenery. I'm deeply impressed by the seasonal plants, such as cherry blossoms in the spring, as well as ginkgos and Japanese maples in the autumn. However, since many students rent apartments rather than live in the university's dormitory, at first I felt a little lonely. In China, more than 90% of university students live in dormitories. On the campuses are restaurants, supermarkets, post offices, banks, police stations, and almost every other facility you may need in daily life. Since universities in China constitute a pivotal part of students' daily lives, the atmosphere of such universities is very boisterous. Most Hiroshima University students are very nice and gentle. When I had difficulty finding a part-time job, one student introduced a job to me. Another helped me with my moving. In addition, when I was suffering from insomnia due to mental stress, another student looked into various measures to alleviate my problem. 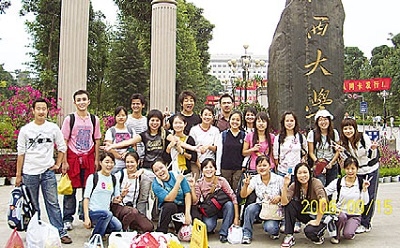 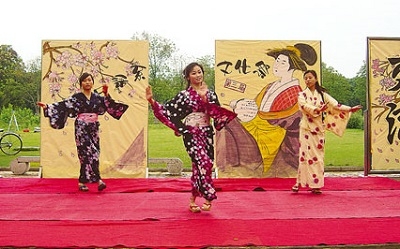 Dancing students of the Japanese department, Guangxi University, at the third Japanese culture festival held by the department

Studying in Japan has changed my view of life. As a student at my faculty, I used to study very hard every day, and when I had no classes, I spent most of my time in the library. However, interacting at Hiroshima University has made me start to think that studying and working are not the be-all-and-end-all of life. Now I'm trying a wide range of things, such as actively joining in volunteer initiatives and extracurricular activities, so that I can live a richer life. In the summer, I participated in a local festival and played the role of a ghost in a haunted house. I also went to a playhouse to listen to rakugo, traditional Japanese comic storytelling, although I could not catch most of the dialogue. I also participated in research of an old Japanese-style house. Currently, I'm taking seminars to become a Peer-Supporter. I would like to encourage students at Hiroshima University to try anything, even if it seems useless at first glance. Actually, I don't think that anything is useless in our lives. I believe that everything you have achieved constitutes yourself. 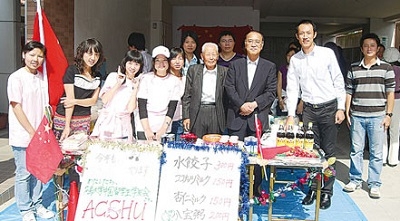 Commemorative photo with President Asahara and students from China selling boiled gyoza at the Sake Matsuri (The author is wearing a white cap.) 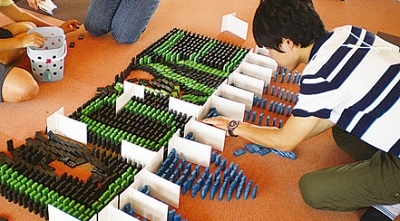 Participating in a dominoes training session at a FY 2010 interaction meeting for international and scholarship students from the Chugoku, Shikoku, and Kyushu regions

I traveled to Beppu City, renowned for its hot springs. Although I had heard that people in Japan still bathed together in mixed-gender settings, I was told by a local man in the city that this was a thing of the past. This made me flush with embarrassment. Moreover, I had thought that on the Jigoku Meguri ( “Hell” Tour), people would actually bathe themselves in the various hot springs. I was surprised to learn that the tour included hot springs where the water temperature reached nearly 100°C or the water was a strange color, and that the purpose of the tour was to observe such hot springs, rather than bathe there. 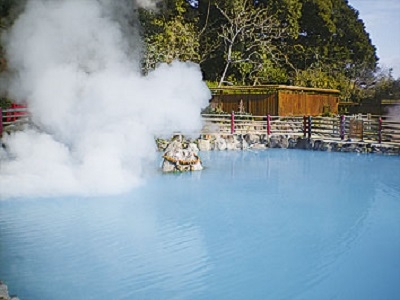 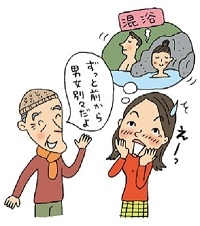