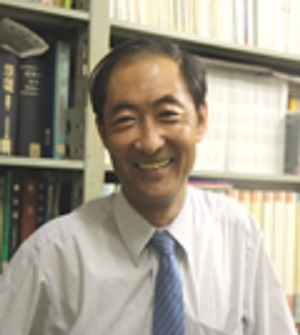 In this edition of Research NOW, we interviewed Professor Masayuki Udagawa of the Graduate School of Integrated Arts and Sciences.
(2008 June 20th, Interviewed by the Public Relations Group, Office of the President)

Professor Udagawa's area of specialization is Solid State Physics, which tries to clarify the various properties of substances. In particular, his research centers on clarifying the mechanism of material properties at the atomic level through "Laser Raman Scattering" which gives us the characteristic material spectra (Raman Spectra) under the exposure of laser beam.

Thermoelectric materials can be used until they give out, and there are no moving parts (such as the turbines necessary in thermal power generation), which means that they are less prone to breaking and require no maintenance. Since heat can be directly converted into electricity, it also makes clean electrify generation possible.
Research and development aimed at using this special characteristic to generate electricity from the exhaust fumes of motor vehicles is proceeding not only in Japan, but around the world as well, and it is hoped that it will be possible to harness this energy in the very near future.

On the other hand, when an electric current is passed between the metals/semi-conductors, it cases what is called the "Peltier Effect," a cooling property, which can be used to create freezers, etc, without any cooling mediums. 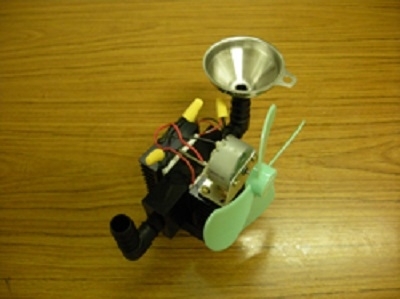 The white portion is the thermoelectric conversion element. By pouring hot water into the central portion and creating a temperature gap, electricity is generated, which spins the fan blades.

The Key to Thermoelectricity Conversion is the Movement of Atoms.

In order to improve thermoelectricity conversation performance (ZT), a conflicting quality is required: electricity must flow as it does through metals, but must be difficult to conduct heat, like glass. What conducts heat inside of materials is the movement of electrons and the vibrations of atoms. However, in the case of semi-conductors, it is possible to make the movement of electrons smaller. As a result, there is the need to reduce the amount of heat carried by the vibrations of the atoms.

The active movement of atoms is known as "Rattling", and while it was known that larger movement of the atoms causes large declines in thermal conductivity, the cause of atomic rattling was still unknown.

In recent years, a next generation thermoelectric material, which has cage structures able to accept atoms and small molecules, has gained attention, and developmental research on this material is actively being carried out. A material which contains nano-scale (10-9ｍ in size) cage structures made of atoms, reminiscent of a child's rattle, has been discovered, and it is known that these structures do not effectively conduct heat. In other words, it is believed that an atom caught inside the cage moves freely within the cage and scatter conducted heat. This seemed to be the cause of atomic rattling. 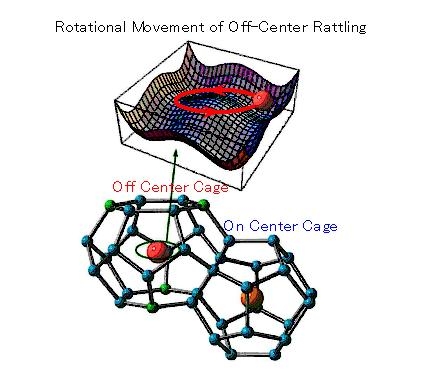 The Road to Success: Using Light to Find Atomic Motion in the Cages

This time, Professor Udagawa and colleagues discovered the cause using an experiment which utilized "Laser Raman Scattering" to observe characteristic material spectra (Raman Spectra) which scatters when the material is exposed to a laser beam.

In 2006, Professor Udagawa and colleagues discovered spectral changes (laser light, unlike sunlight, has only one color, and the light changes the movement of the atoms in the material, which causes the color of the light to change - the speed of atomic movement is understood by the degree of color change which occurs) and that there were differences in atomic movement in cages where the atom was on center and off center using laser Raman scattering.

"When we made this discovery, I was really excited," says the professor as he tells his story, however the process of making this discovery was not an easy one. First, he created the theory that the rotation movement of off center atoms decreases thermal conductivity, and from there it took another 2 years' time until the discovery was actually made.

The cage-structure compound used in the experiments is made up of gallium (Ga), silicone (Si), and germanium (Ge) atoms, and barium (Ba) as well as strontium (Sr) ions to compose A8Ga16Si30-xGex(A=Ba, Sr). In this compound, Ba and Sr ions exist in the cage created by Ga and Ge. However, by replacing the atomically large-sized Ge in A8Ga16Si30 and making the cage bigger, the Sr ion shifts 0.04 nm from the central position, despite the Ba ion remaining in its central position. Further, it rotates between 4 positions in a rattling pattern (see Image 2). Professor Udagawa and his colleagues traced the cause to the fact that expansion of the cage by replacing Ge does not happen uniformly, rather there are large differences in expansion according to direction, and that off center rotation movement is rattling.

From Research Results to Practical Expectations

The results of this research are expected not only to explore thermoelectric conversion materials, but also to serve as an important guiding light in promoting the development of thermoelectricity conversion technology in various fields, such as in the prevention of global warming. It is also a large factor in improving efficiency and cost performance in actual applications.

It is also possible that the movement of the atoms inside the cage is involved in the appearance of various functions within the material, and it is possible that it may be connected in the development of new and previously unthinkable functions for materials.

To the Next Phase: Finding a High-Efficiency Thermoelectric Conversion Material at HU

Not only is HU endowed with a noncontact Raman scattering device able to measure everything from insulators to metals, but also able to measure materials at low/high temperature, under high-pressure, in magnetic fields, and under microscopes. Even when you look at research groups across the globe, there are no others able to change the conditions for their test materials on such a broad spectrum.

The present success cannot be achieved without good samples synthesized by Professor Takabatake at ADSM, HU.

Professor Udagawa estimates that these findings will promote the search for a thermoelectricity conversion material which utilizes waste energy, which makes up nearly 2/3 of the total energy. While the discovery itself is a huge contribution to society as is, Professor Udagawa discussed his intentions to continue to search for a Hiroshima University-produced high-efficiency thermoelectric conversion material to be manufactured based on their findings thus far.

In cooperation with HU's Institute for Advanced Materials Research, we have prepared a leading research environment thanks to generous support from the COE Formation program, "Interstitial Science" and the MEXT (Ministry of Education, Culture, Sports, Science and Technology) Special Area Research Grant in "Skutterudites."

With the vision that young researchers will step into the global realm upon leaving HU, 4th year students are made to choose a cutting-edge research topic upon their acceptance to the lab, and they are given guidance on their experiments with a firm sense of purpose.

The professor would like to see current Masters students who will continue on as Doctoral students compose a thesis in English. Looking toward making presentations at international conferences, efforts are being made at the Doctoral level in subscribing to international journals. Professor Udagawa himself has many times realized the necessity for the ability to compose an English manuscript, as well as the ability to debate and give presentations in English. He says that he does not want his students to have inferiority complexes when it comes to the basics.

The Seebeck and Peltier Effects

In 1821, German physicist and doctor Thomas Seebeck connected 2 varieties of semi-conductors to make a circuit. When he heated one end, an electric current was produced in the circuit. Thus, this effect is called the "Seebeck Effect" after its discoverer.

In 1834, French physicist Jean Charles Peltier applied votalge to two different metals and ran a current through them. When he did, one junction was cooled (endotherm), while the other was heated (exotherm). When the current was reversed, it was discovered that the relationship reversed. Thus, we call this effect the "Peltier Effect."

Everyday Light Scattering (Why is the sky blue? Why is the sunset red?)

When the light of the sun, composed of different wavelengths of light travels to the Earth, it collides with molecules in the atmosphere, causing them to be scattered this way and that. We call this "scattering." As the wavelength get shorter, their susceptibility to scattering becomes greater, thus blue, a short wavelength color, is scattered in the troposphere, which makes the sky appear blue. On the other hand, when the sun begins to go West, the distance that the sunlight passes through the atmosphere become longer, and short wavelengths are scattered, leaving only the long wavelengths like red and orange, making the sunset appear red. 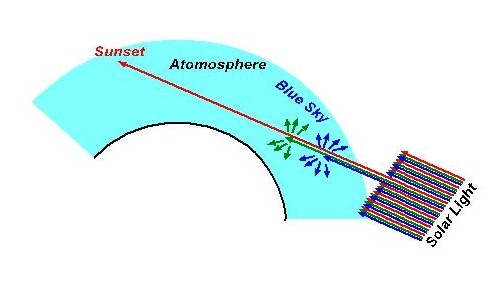 "Since the atom really gave way from the center, our discovery was mostly a fluke,"says professor Udagawa humbly. However, sure it was the Goddess of Science similing upon him for his constant hardworking efforts ever since he himself was a graduate student. Surely she is cheering him on to continue his efforts as well. The guidelines presented by Professor Udagawa promoted the acceleration of research, given birth to an HU-original "material of dreams", and is strongly expected to tie into the prevention of global warming. When I asked about how big the anano-scale cages were, the Professor explained that I should think about comparing the size of apples to the size of the earth, where the cages are apples. His words were far beyond the realm of my understanding. (O)