In Egypt, we hosted Japan Festival with Cairo University 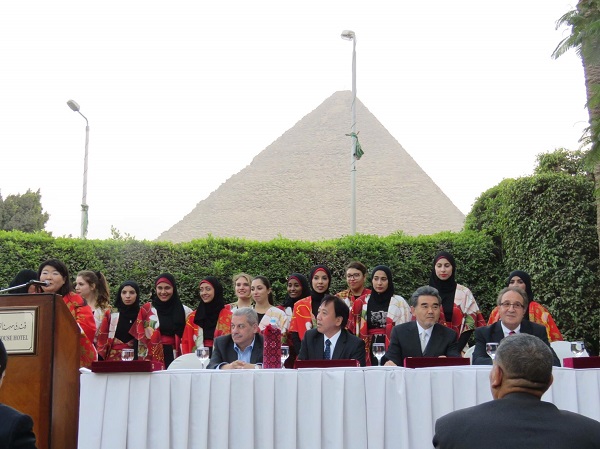 Prior to the Japan Festival, we had the Agreement Signing Ceremony in the presence of Mr. Takehiro Kagawa, Ambassador Extraordinary and Plenipotentiary of Japan to the Arab Republic of Egypt (2nd from left).

During the festival, we introduced Hiroshima University to the participants, and conducted individual consultation with those who were interested in coming to Japan for study. Also, Executive and Vice President Toshiyuki Sato made a speech regarding peace and our effort on peace-building.

The festival was broadcasted on the Sada Elbalad TV, the Egypt’s nation-wide TV station founded in 2011.

TV video clips (People eating Okonomiyaki and other Japanese food as well as the interview with President Ochi were broadcasted.)

Prior to the festival, on December 7th, we concluded exchange agreements with Misr University for Science & Technology, Beni Suef University, and Egypt-Japan University of Science and Technology, respectively. Taking advantage of this opportunity, we are going to facilitate active exchange with these universities.

Now we have six partner universities in Egypt. Through our Cairo Center, we will work toward further expansion of academic exchange between Egypt and Japan.