On July 10, 2017, Hiroshima University held a cultural exchange event. We scheduled the event to take place after the Ramadan fast ended in order that all of our international students, faculties, and staff members with various cultural and religious backgrounds could join the event to enjoy Hiroshima’s famous foods together. We had more than 400 participants―a number that outperformed last year’s―who consisted of not only Muslim students and foreign researchers, but also Japanese students, non-Muslim international students, and staff of Hiroshima University.

In holding the event, Hiroshima University received support from Otafuku Sauce Co., Ltd. (a global company founded in Hiroshima and famous for its production of Okonomi Sauce), with which Hiroshima University has concluded a comprehensive collaboration agreement. The company kindly provided us with its original “Halal Okonomi Sauce,” which received Halal certification (a certification given to food items which are lawful, permitted, or allowed for Muslims) from an official certifying agency.

With the cooperation of the General Incorporated Foundation Oconomiyaki Academy, we prepared dedicated iron plates, on which Okonomiyaki was cooked, at the University Hall where the event took place. Participants fully enjoyed Okonomiyaki served by professional chefs, which was freshly baked and catering to vegetarians and Muslims.

President Mitsuo Ochi said in his remarks at the event, “Hiroshima University is full of international students and staff with various cultures, religions, creeds, and life-styles. As you might not have had an opportunity to enjoy Hiroshima’s famous foods solely because of their ingredients, please enjoy Hiroshima’s famous “Okonomiyaki,” “Momiji-Manju,” and “Shakushi-Senbei” on this special occasion.” President Ochi then walked around the venue and had a pleasant talk with students and faculty alike.

A Muslim student who participated in the event with her family said, “It’s difficult to find Halal food in Japan, so I found this kind of event very helpful to us.”

Students and staff members with a wide variety of dietary backgrounds were able to promote cross-cultural exchange and mutual understanding beyond cultural differences, while enjoying Hiroshima’s food together. 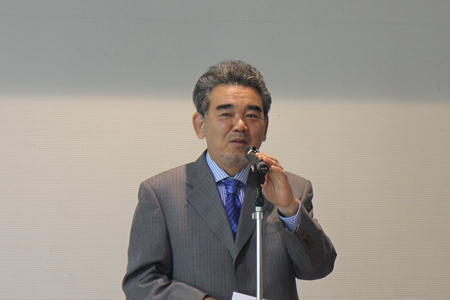 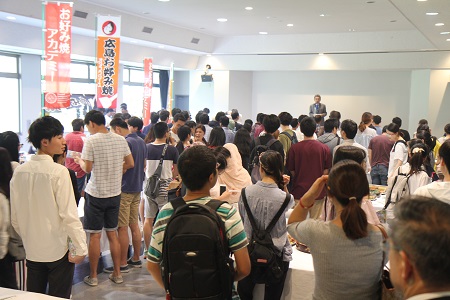 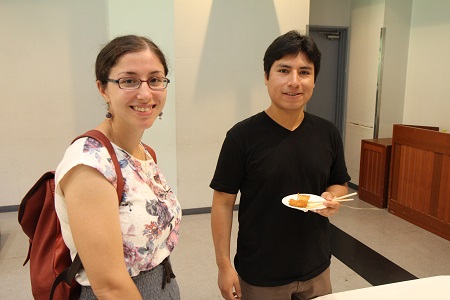 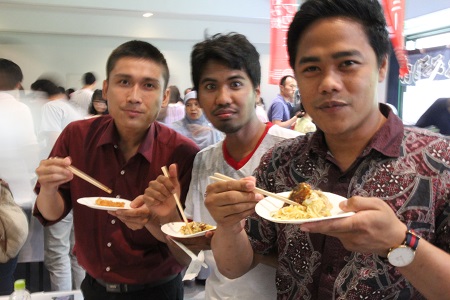