On August 6, 2017, Hiroshima University invited Ms. Izumi Nakamitsu, the first Japanese woman to work as an Under-Secretary-General High Representative for Department Affairs United Nations taking her position since this May, and held a lecture meeting at the Higashi-Senda Innovative Research Center.
A total of 220 people, including faculty and administrative members, students, and local citizens, participated in Ms. Nakamitsu’s lecture titled, “Challenges for Disarmament in 21 century”. 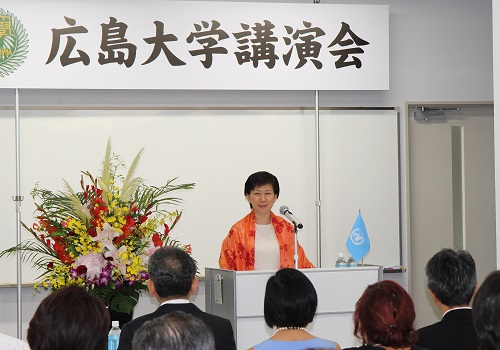 Before the lecture, President Mitsuo Ochi greeted, “Hiroshima University contributes to create a peaceful and an international society. I hope today’s lecture meeting will be a chance to think about what we can do together for disarmament and world peace.”

In the beginning of the lecture, Ms. Nakamitsu spoke to the young generation of the 21st century to make the lecture a chance for them to think what they can do.
Afterwards, she talked about the “Treaty on the Prohibition of Nuclear Weapons”, a treaty to prohibit the development or the possessing of nuclear weapons, adopted in the United Nation this July and said, “The United Nation is trying to find challenges that go with both the nuclear power nation and the non- nuclear power nation so that the gap between these countries won’t get bigger.”
She talked about disarmament of WMD in terms of both nuclear and non-nuclear weapons, as on ATT, Cyber and AI technologies, urging overall understanding towards security and disarmament while sharing her ideas about the expected, possible, and emerging roles of the United Nations.

In the questions and answers, university students and the high school students asked various questions about peace education, passing on the memories of war, and helping the conflict areas. Ms. Nakamitsu used all of the time provided and answered each of the questions.

In the end President Ochi gave Ms. Nakamitsu a thank you letter and a gift and closed the lecture with a big round of applause. 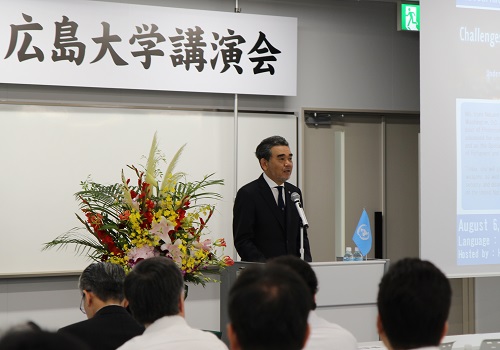 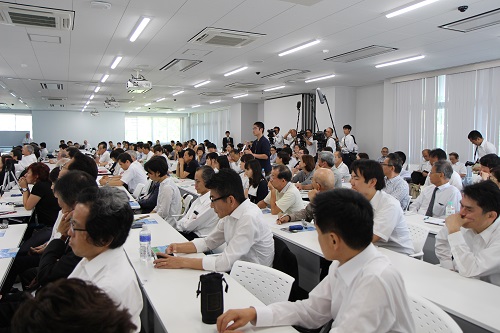 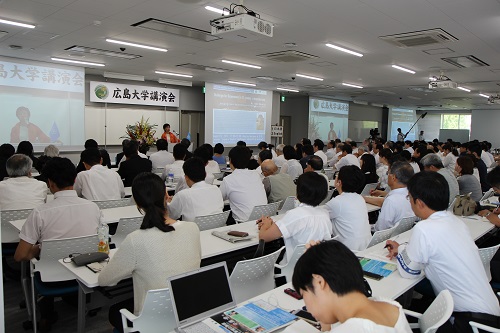 The innovative Research Center, with full of audience