On September 28th 2019, the 4th Japanese Essay Speech Contest was held at Guizhou University, one of the inter-university exchange agreement partners of Hiroshima University.

This was the fourth time that Komaru Transportation Foundation has hosted this essay speech contest. Hiroshima University, Consulate-General of Japan in Chongqing, and Guizhou University, have co-hosted this event as in the past. This year’s theme was “Big Data and Transportation”. The contest invited students from universities in and around Guizhou and there were applications from 59 students from 5 universities. Universities recommended a total of 25 essays out of those applicants. The 5 students that won awards presented their essays in the venue. There were about 100 people in the audience including students learning Japanese and Japanese teachers.

The contest started with the opening addresses by Mr. Shigehiro Komaru (Head Director of the Komaru Transportation Foundation and President of the Fukuyama Transporting Co. Ltd.), and Prof. Wang Xiaomei (Dean, College of Foreign Languages, Guizhou University). In addition, Mr. Kenji Saito (Vice Consul General of Japan’s Consulate General in Chongqing), the guest of the event, also gave his address.

The 5 students then presented their speeches in Japanese fluently. Based on the judges’ strict and fair reviews, Ms. Li Mulan from Guizhou Minzu University was chosen to be the first prize winner of the contest. In addition, Ms. Wu Runmei from Guizhou University of Finance And Economics was chosen for “Consul-General of Japan in Chongqing Special Award” this time.

The contest concluded by Prof. Yoshichika Honda of HU Morito Institute of Global Higher Education, giving a closing speech. The audience listened intently until the very end of the contest. 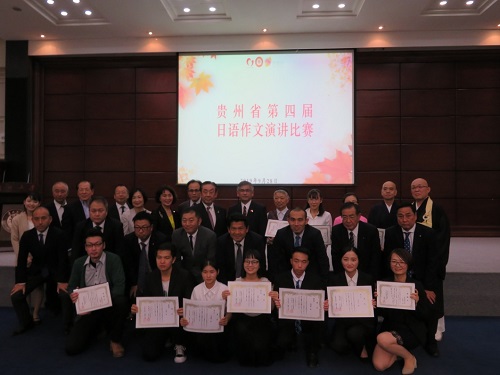 Group Photo with the Prize Winners