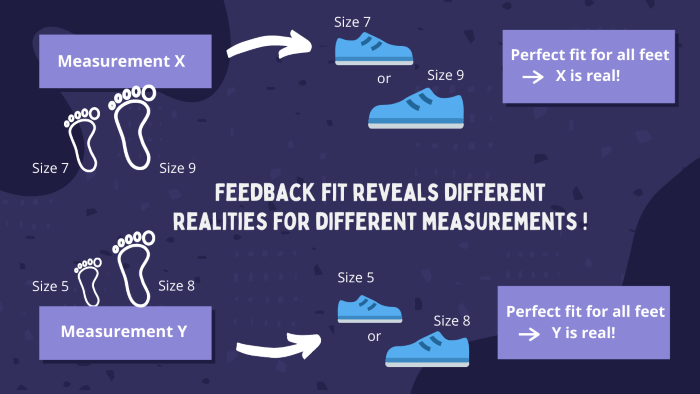 It is hard to know whether a quantum measurement is precise or not. Feedback compensation directly compares the measurement result with an "imprint" of the original left in a weak interaction. It is a bit like trying on shoes - you can tell whether the shoe fits or not, and a good fit confirms the result of your measurement. In quantum mechanics, it is possible to get a good fit from completely different measurements. The newly reported results show that the dependence of reality on the measurement is an experimentally testable fact.

Shoe shops sell a variety of shoe sizes to accommodate a variety of foot sizes — but what if both the shoe and foot size depended on how it was measured? Recent developments in quantum theory suggest that the available values of a physical quantity, such as a foot size, can depend on the type of measurement used to determine them. If feet were governed by the laws of quantum mechanics, foot size would depend on the markings on a foot measure to find the best fit — at the time of measurement — and even if the markings were changed, the measurement could still be precise.

In quantum mechanics, the "size" of a physical quantity is more elusive than foot length because unavoidable uncertainties in the history of a quantum system make it difficult to confirm the measurement due to what’s called the uncertainty principle. Essentially, it is impossible to know the real properties that a quantum system had before the measurement. There isn’t a way to try on the shoe after the measurement — until now. A researcher at Hiroshima University may have found a solution to the problem, with possible implications for emerging quantum information technologies, such as quantum communication and quantum computing.

Holger F. Hofmann, professor in the Graduate School of Advanced Science and Engineering, Hiroshima University, published his approach on Feb. 3 in Physical Review Research, a journal of the American Physical Society.

According to Hofmann, a qubit — the basic unit of quantum information – can be used as an external probe to test the precision of a measurement of a physical property in its original quantum system. The probe interacts weakly, creating a memory of the physical property that is automatically encrypted by the qubit. The quantum encrypted one qubit memory can be used to evaluate the precision of a subsequent measurement. A feedback design allows the later measurement value to erase the quantum memory encoded on the probe qubit. If the memory is perfectly erased without any leftover traces, Hofmann said, the measurement outcomes must have been precise each and every time the measurement was performed.

“Quantum mechanics describes physical systems as mysterious ‘super positions’ of possibilities that seemingly ‘collapse’ into reality only when a measurement distinguishes the different possibilities,” Hofmann said, referring to the idea that mere observation fundamentally changes a system. “There have been many attempts to find out what is there when nobody is looking, and my work builds on these previous attempts.”

Hofmann noted that these attempts involve unmeasurable, unobservable uncertainties, making it difficult to answer any questions about the fundamental nature of reality.

“There is still a lot to do, and I hope that many members of the quantum measurement community will join in to develop the necessary theoretical framework,” Hofmann said. “Physics should be grounded in observable phenomena, but, strangely enough, the concepts used in quantum mechanics are not.”