On March 20th 2021, the 15th Beijing Japanese Essay Speech Contest was held online in Beijing and Japan, with the theme of “Across the mountains, streams and foreign lands, the Sun and Moon, all beneath the same sky”. There were applications from 337 students from universities across China, of which only 5 finalists were selected through the essay writing screening and presented their speeches.

This contest has been held by Hiroshima University’s Beijing Research Center every year at Capital Normal University in Beijing (where the aforementioned center is located) since 2006 as part of our ongoing Japan-China exchange efforts. However, this year’s event was held online from the Headquarters of Fukuyama Transporting Co., the special sponsor of this contest (as the venue in Japan), with the contestants, special guests and other participants from China participating online from individual locations due to COVID-19.

The contest began with an opening speech by Professor Yoshichika Honda, Director of HU Beijing Research Center, followed by a recorded video-message from H.E. Mr. Hideo Tarumi, Ambassador Extraordinary and Plenipotentiary to the People's Republic of China. Additionally, greetings were given by Chief Director Shigehiro Komaru of The Shibuya Ikueikai Foundation (President and Representative Director of the Fukuyama Transporting Co.) who is the special sponsor of this contest.

At the end of the contest, each judge commented on the speeches, followed by the closing remarks by HU Executive Vice President Toshiyuki Sato. The participants, approximately 70 people, both in-person and online, listened enthusiastically until the very end. 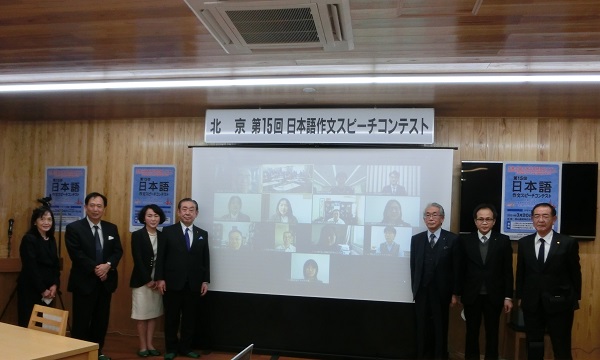