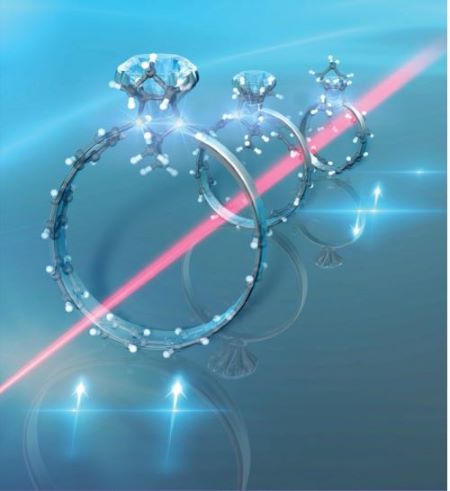 The effects of the curvature contributes to their ground spin state

Chemical rings of carbon and hydrogen atoms curve to form relatively stable structures capable of conducting electricity and more — but how do these curved systems change when new components are introduced? Researchers based in Japan found that, with just a few sub-atomic additions, the properties can pivot to vary system states and behaviors, as demonstrated through a new synthesized chemical compound.

The results were published on April 26 in the Journal of the American Chemical Society.

“In the past decade, open-shell molecules have attracted considerable attention not only in the field of reactive intermediates, but also in materials science,” said paper author Manabu Abe, professor in the Graduate School of Advanced Science and Engineering, Hiroshima University.

Open-shell molecules can gain or lose molecules, meaning they can adjust to bond with other chemicals. In carbon nanotubes, for example, rings of carbon and hydrogen atoms strongly bond to one another. The more rings added, however, the more the properties of the tube can change. Known as curved paraphenylenes, or CPPs, Abe and his team investigated how the CPP might change if the open-shell molecules were exposed to systems with molecular orbits containing two electrons in various states, in addition to the carbon and hydrogen atoms.

The process of introducing these diradical systems to the CPPs resulted in a novel type of azoalkane, or compound of nitrogen and a group of weakly bonded hydrogen and carbon atoms. This azoalkane formed with six CPPs and degenerated into six CPPs with diradicals.

“We investigated to understand the effects of the curvature and system size on the particle interactions, the different states and their unique characteristics,” Abe said.

The researchers found that the CPPs with embedded diradicals had varying states and properties, such as the intrinsic description of a particle known as spin, depending on how many CPPs resulted in the final system. Spin, the angular momentum of a particle, can contribute to or hinder a system’s stability based on how the energy is balance. For example, in a singlet state, a system remains stable even with unbonded electrons, because their spins are opposite. Triplet states can remain stable, as well, since their unbonded electrons can spin in parallel.

“The ground-state spin multiplicity is largely dependent on the ring size,” Abe said, referring to the potential orientations spin can take, which can indicate the stability of a system. “The singlet ground state was favored for smaller CPP derivatives.”

The smaller singlet states — diradical CPPs with smaller energy ranges between orbital shells — also demonstrated a desired characteristic for carbon nanotubes: aromaticity, or more stable alignment in a single plane. Since the carbon-hydrogen rings bond with unusual angles to form the tubes, they can be forced out of alignment and result in system instability. The more rings added to a system, the more strained the system becomes. For the smaller singlet state systems, the rings align in one plane, resulting in more stability.

Next, the researchers plan to further investigate this in-plane aromaticity, with the aim of creating the largest possible structure with strong bonds that still exhibits this stable property.

Japan Society for the Promotion of Science, Japan Science and Technology Agency and International Collaborative Research Program of the Institute for Chemical Research at Kyoto University funded this work.