Researchers have identified a potential reason why lower numbers of COVID cases have appeared amongst smokers compared to non-smokers, even as other reports suggest smoking increases severity of the disease. 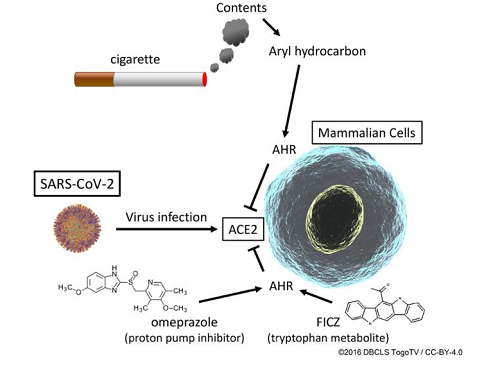 Schematic representation of effects of AHR agonists
A team of Japanese scientists demonstrates that treatment with AHR agonists decreases expression of ACE2 via AHR activation, resulting in suppression of COVID-19.

Researchers have identified two drugs that mimic the effect of chemicals in cigarette smoke to bind to a receptor in mammalian cells that inhibits production of ACE2 proteins, a process that appears to reduce the ability of the SARS-CoV-2 virus to enter the cell.

The findings appear in the journal Scientific Reports on 17 August.

Something of a paradox exists with respect to smoking cigarettes and COVID-19. Active smoking is associated with increased severity of disease, but at the same time, many reports have suggested lower numbers of COVID cases amongst smokers than amongst non-smokers.

“Something strange was going on here,” said Keiji Tanimoto of Hiroshima University’s Research Institute for Radiation Biology and Medicine, the corresponding author of the paper. “But we had a few ideas about how to tease out what some of the mechanisms at work might be.”

“We must stress the presence of strong evidence showing that smoking increases the severity of COVID-19,” Tanimoto added. “But the mechanism we discovered here is worth further investigation as a potential tool to fight SARS-CoV-2 infections.”

It is known that cigarette smoke contains polycyclic aromatic hydrocarbons (PAHs). These can bind to and activate aryl hydrocarbon receptors (AHRs). A receptor is any structure of the surface or inside of a cell that is shaped to receive and bind to a particular substance. AHRs are a type of receptor inside of mammalian cells that is in turn a transcription factor — something that can induce a wide range of cellular activities through its ability to increase or decrease the expression of certain genes.

Knowing this about the relationship between PAHs and AHRs, the researchers wanted to investigate the effect of drugs that activate AHR on expression of the genes that control production of the ACE2 protein — the infamous receptor protein on the surface of many cells types that works like a lock that the SARS-CoV-2 virus is able to pick. After binding the virus to the ACE2 protein, it can then enter and infect the cell.

First, the scientists investigated various cell lines to examine their gene expression levels of ACE2. They found that those cells originating in the oral cavity, lungs and liver had the highest ACE2 expression.

These high-ACE2-expression cells were then subjected to various doses of cigarette-smoke extract (CSE) for 24 hours. After this, the rate of expression of the CYP1A1 gene, which is known to be inducible by CSE, was evaluated. The CSE treatment had induced increased expression of CYP1A1 gene in liver and lung cells in a dose-dependent manner — the greater the dose, the greater the effect. However, this effect was not as pronounced in oral cavity cells. In other words, greater activity of the CYP1A1, less production of the ACE2 receptors — the route that the virus is able to enter cells.

In order to explain why this was happening in the presence of cigarette smoke, the researchers then used RNA sequencing analysis to investigate what was happening with gene expression more comprehensively. They found that CSE increased the expressions of genes related to a number of key signalling processes within the cell that are regulated by AHR.

To more directly observe this mechanism by which AHR acts on ACE2 expression, the effects of two drugs that can activate AHR were evaluated on the liver cells. The first, 6‑formylindolo(3,2‑b)carbazole (FICZ) is derivative of the amino acid tryptophan, and the second, omeprazole (OMP), is a medication already widely used in the treatment of acid reflux and peptic ulcers.

In other words, the cigarette smoke extract and these two drugs—all of which act as activators of AHR—are able to suppress the expression of ACE2 in mammalian cells, and by doing so, reduce the ability of the SARS-CoV-2 virus to enter the cell.

Based on the findings in the lab, the team is now proceeding with pre-clinical and clinical trials on the drugs as a novel anti-COVID-19 therapy.