Received a letter of thanks from the parents of an international student, who has been admitted to the Graduate School of Hiroshima University this autumn!

The Admission Office of Hiroshima University (HU) has recently received a letter of thanks from the parents of one of our international students, who watched the entrance ceremony held on 1 October via a simultaneous online broadcast.

The letter was from Mr. and Mrs. Cynthia and Conrad Welti, the parents of Ms. Sophia Welti, a graduate student from Hawaii, USA, who has enrolled in the ‘Phoenix Leader Education Program for Renaissance from Radiation Disaster’ at HU.

In their letter, they wrote that they were moved by the performance of HU’s school song at the entrance ceremony, and that they listened to the speech of the President, which they described: ‘It was clear and direct, and conveyed a well-founded pride in Hiroshima University. We learned of the university’s leadership role, including that of creating Covid protocols that protect people while allowing their work to continue,’ and also wrote that they were proud that their daughter is going to study at Hiroshima University.

Please note that HU has published this letter after obtaining the permission from Sophia and her parents. As always, HU continues actively supporting all the international students.

The following is Sophia’s first impression with Hiroshima city and Hiroshima University:
“Although I have only been in Hiroshima city for two months, it seems like a fun and easy city to live in. Hiroshima University is not afraid to try new things, and there is a good selection of classes offered in English as well as Japanese. I am so grateful to be able to take some classes face-to-face.” 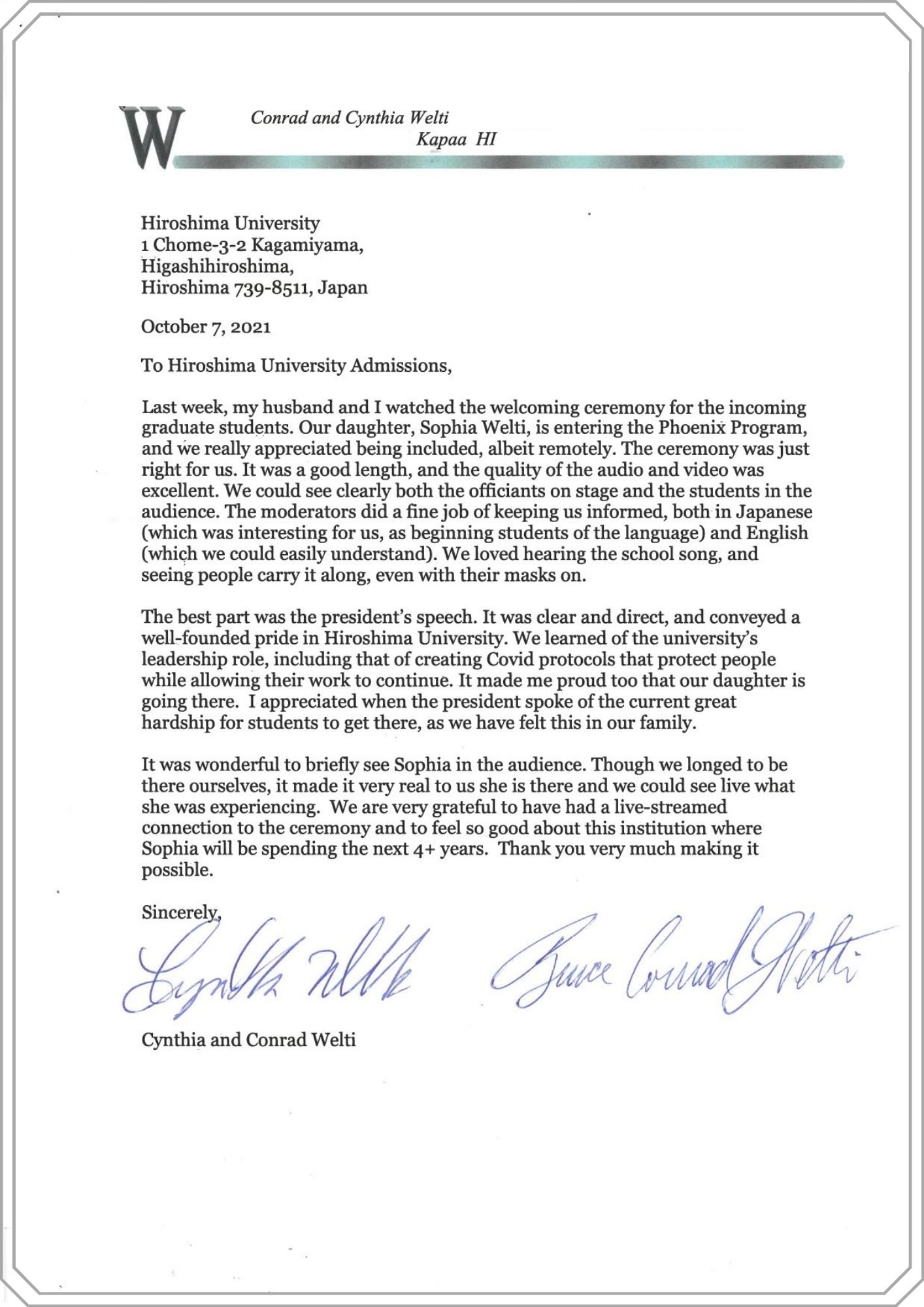 The contents of the letter

Last week, my husband and I watched the welcoming ceremony for the incoming graduate students. our daughter, Sophia Welti, is entering the Phoenix Program, and we really appreciated being included, albeit remotely. The ceremony was just right for us. It was a good length, and the quality of the audio and video was excellent. We could see clearly both the officiants on stage and the students in the audience. The moderators did a fine job of keeping us informed, both in Japanese (which was interesting for us, as beginning students of the language) and English (which we could easily understood). We loved hearing the school song, and seeing people carry it along, even with their masks on.

The best part was the president’s speech. it was clear and direct, and conveyed a well-founded pride in Hiroshima University. We learned of the university’s leadership role, including that of creating Covid protocols that protect people while allowing their work to continue. It made me proud too that our daughter is going there. I appreciated when the president spoke of the current great hardship for students to get there, as we have felt this in our family.

It was wonderful to briefly see Sophia in the audience. Though we longed to be there ourselves, it made it very real to us she is there and we could see live what she was experiencing. We are very grateful to have had a live-streamed connection to the ceremony and to feel so good about this institution where Sophia will be spending the next 4+ years. Thank you very much making it possible.