THE Awards Asia 2021: HU’s Data Transparency and Supporting Evidence for its Approach towards the Elements of SDGs were Highly Valued

Times Higher Education (THE), a British higher education magazine, has announced the shortlist for "THE Awards Asia 2021", and Hiroshima University (HU) was the only nominee in Japan to have been shortlisted for the category of "THE DataPoints Social Impact Award".

In "THE Impact Rankings"－an attempt to make the social contribution efforts of universities visible to the public by using the framework of the United Nations’ SDGs (Sustainable Development Goals), HU’s efforts were recognized because it submitted a large amount of publicly available data as evidence that demonstrated how it has been working towards elements of SDGs.

An online event was held on 14 December 2021 for "THE Awards Asia ceremony" where the winners from each category of "THE Awards Asia 2021" were announced. For the category of "THE DataPoints Social Impact Award", Indonesia's Institut Teknologi Sepuluh Nopember was the winner among the shortlisted nine universities in Asia (eight universities listed in the box below, plus Universiti Sains Malaysia).

In January 2021, HU made a "Carbon Neutral x Smart Campus 5.0 Declaration" (to be realized by 2030) on the same day when it concluded a comprehensive collaboration agreement with Higashi-Hiroshima City and Sumitomo Corporation regarding the realization of Society 5.0 and a smart city in Higashi-Hiroshima City and its surrounding area. In addition, HU has published the "Hiroshima University SDGs Report 2021" to widely disseminate information on its implementations of SDGs, focusing on its major initiatives for 2020-2021.

While making further efforts towards achieving SDGs, HU will make continued contributions towards every aspect of education, research, and society.

About "THE Awards Asia"
This is an annual award ceremony where THE recognizes outstanding reform efforts by universities in Asia. This year’s awards were held for the third time, starting in 2019. For the category of "THE DataPoints Social Impact Award", THE makes evaluation based on its own data. 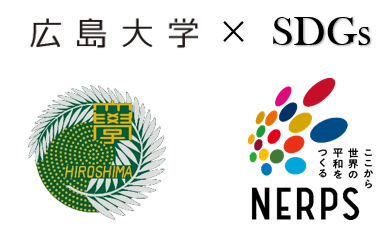 NERPS contributes to the promotion of SDGs and serves as a resource hub for SDG-related activities of Hiroshima University.