Rice has long been a staple food for more than half the global population. The United Nations even declared 2004 the International Year of Rice to raise awareness and encourage action to protect and advance the crop for a rapidly growing population. More recently, the UN and the International Rice Research Institute co-convened the Sustainable Rice Platform, to connect stakeholders in every sector with the goal of sustainably and affordably producing more rice.

Rice is old, with archeological evidence dating back about 10,000 years. Modern crops have been engineered over the years to improve productivity and resiliency, based on experience of farmers and with the scientific understanding of researchers. The genetic guidance rice uses to grow and reproduce, however, is still not fully understood. Now, a research team based in Japan is learning more, including how critical one gene is for the plant to develop grains of rice, which serve as both seeds and food.

Rice flower and ovule
The tab1 mutant, in which the function of the TAB1 gene is lost, does not form an ovule. (Image courtesy of Wakana Tanaka, Hiroshima University)

“Plants have a unique ability to produce lateral organs, such as leaves and floral organs, continuously throughout their lifecycle,” said co-first author Wakana Tanaka, assistant professor at the Program of Food and AgriLife Science, Hiroshima University’s Graduate School of Integrated Sciences for Life. “This ability depends on the activity of pluripotent stem cells, which self-renew to maintain a constant number in coordination with organ differentiation in the plant. Our understanding of the mechanism underlying stem cell maintenance was progressing in the thale cress plant, another model plant, but our knowledge of these mechanisms in rice was insufficient.”

Rice flowers contain floral organs, including the pistil, which houses the flower’s ovary. Nestled in the ovary at base of the flower, hidden from view, are the flower’s ovules, which grow into rice seeds when pollinated.

“Since all floral organs are derived from stem cells, which are present in young flower buds, the stem cells must be maintained in a constant number until the last floral organ — the ovule — is formed,” Tanaka said.

In thale cress, a gene known as WUS is essential for stem cell maintenance during the early stages of flower development, when the pistil and stamens form. The researchers previously isolated a rice plant without the homologous gene, called TAB1, from a population of mutated rice plants. In this study, they further examined the mutant without TAB1 (tab1 mutant) and found it lacked ovules.

“Without ovules, the tab1 mutant did not produce any fertile rice grains, suggesting the TAB1 gene is essential for rice grain formation,” Tanaka said.

In further analysis, the researchers found that in the tab1 mutant, stem cells were present during the formation of early floral organs but had disappeared by the time ovules formed.

“This result indicates that the TAB1 gene is required for the robust maintenance of stem cells until the last stage of flower development,” Tanaka said. “Collectively, the TAB1 gene plays an important role in maintaining stem cells during ovule formation, eventually leading to the formation of seeds. This direct necessity of stem cell activity in ovule formation is not seen in thale cress, so it seems to be unique to rice.” 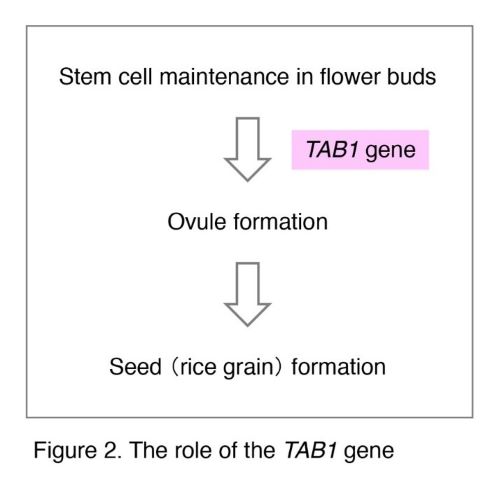 TAB1 gene promotes ovule formation by maintaining stem cells in flower buds. This function of the TAB1 gene eventually leads to the formation of the seed (rice grain).

The researchers plan to continue investigating the genes involved in the formation of other floral organs.

“We would like to elucidate whole mechanisms of stem cell maintenance during flower development by clarifying the gene,” Tanaka said. “In the future, we hope to contribute to rice breeding using the mechanisms we have revealed.”