Advancement in cell lines capable of producing Hepatitis B’s many genotypes can reveal much about the unique virological features and treatment responses eluding researchers of this virus that has been infecting humans as far back as the Bronze Age. 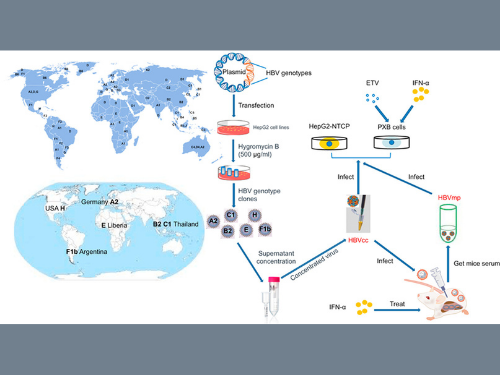 A new study created stable cell lines capable of producing different genotypes of the hepatitis B virus (HBV), advancing understanding of each type’s distinct virological features, treatment responses, and infectivity that could lead to new therapies against a virus infecting humans as far back as 4,500 years ago.

Cell lines are a vital tool in studying viruses, including vaccine production. But so far, only cell lines expressing HBV’s D3 subgenotype isolated from Europe have been established and studied extensively as it is the best characterized molecular clone of the virus. While it has been an indispensable tool in studying HBV, researchers behind a study published in the August 2021 issue of the Journal of Hepatology argued that it may not fully represent the biology of the virus’ diverse genotypes infecting the rest of the world.

HBV has nine major genotypes, one minor strain, and multiple subtypes — each potentially possessing distinct clinical characteristics and reactions to treatment. The researchers cited mounting clinical evidence showing that HBV genotypes exhibit different disease manifestations and treatment responses. They said genotypes C and F are associated with a higher risk of hepatocellular carcinoma. Patients with genotypes A and B have higher rates of HBeAg seroconversion under IFN-α treatment compared to those infected with genotypes C and F. Meanwhile, genotype D appears to be associated more with acute liver failure than other genotypes

Although racial or ethnic background, the environment, or other confounding factors could explain the differences, the researchers argued that HBV genotypes likely play an important but yet to be defined role in the pathogenesis of liver disease.

“In this study, we succeeded in generating stable cell lines producing hepatitis B virus of various genotypes that are infectious in vitro and in vivo,” said study co-author Michio Imamura, a lecturer at the Department of Gastroenterology and Metabolism of Hiroshima University’s Graduate School of Biomedical and Health Sciences.

Their method produced stable cell lines that showed stable in vitro and in vivo models of HBV infection for genotypes A2, B2, C1, E, F1b, and H. Using it, the researchers observed that HBV genotypes exhibited different infectivity, antigen expression, replication, and responses to treatment.

The latest data from the World Health Organization showed that an estimated 296 million people were living with chronic HBV infection in 2019. It is a leading cause of liver disease worldwide with 1.5 million new infections each year. A vaccine is available to prevent HBV infection. However, there is currently no cure for it.

The United Nations Sustainable Development Goals aim to eliminate HBV infections as a public health threat by 2030. The researchers said the in vitro and in vivo models of infection could pave the way for the development of curative therapies that would be effective against all genotypes of the virus — a goal that is critically important for the elimination of HBV worldwide.

“Using these HBV-infected cell lines and mouse models, we expect to investigate the difference of pathogenesis according to HBV genotypes and attempt to develop new definitive therapies for HBV infection,” Imamura said.