HU Hospital is the fifth facility in Japan to perform surgery using the "Hinotori" system.

"Hinotori" has eight movable axes that act as joints and four arms to which medical instruments such as endoscopic cameras and forceps can be attached. In this surgery, Professor Nobuyuki Hinata of the Department of Urology sat in the cockpit and operated a controller while viewing detailed three-dimensional images to remove the affected part. The surgery went smoothly and was completed in 2 hours and 10 minutes. The surgery was performed with minimal blood loss and with little burden on the patient.

HU Hospital is equipped with two US-made "Da Vinci" surgical robots, which perform robotic surgery for prostate, kidney, and bladder cancers. The hospital is gradually expanding the range of surgeries it can perform to include gastric and esophageal cancers and has decided to introduce "Hinotori" as its third unit.

Medicaroid Ltd. (Kobe City), a joint venture between Kawasaki Heavy Industries, Ltd., and Sysmex Corporation, began the development of Hinotori in 2015, and its production and sales were approved for the first time in Japan in 2020. Professor Hinata was involved in the development of the robot at his previous position at Kobe University. 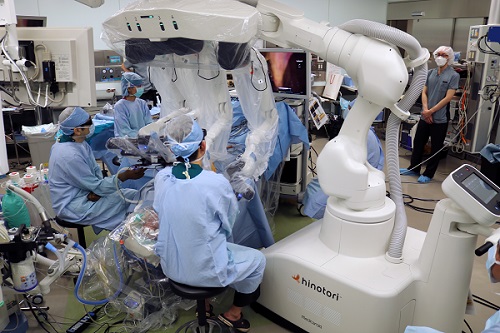 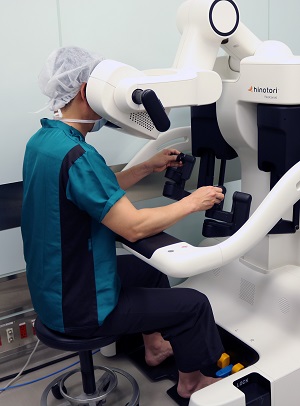