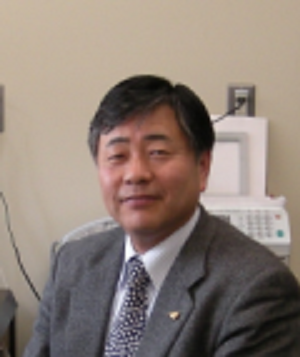 In this edition of Research NOW, we interviewed Professor Masanori Sugiyama of the Department of Molecular Microbiology and Biotechnology, Graduate School of Biomedical Sciences, Hiroshima University.

(Interviewed on March 11th 2008 by the Public Relations Group, Office of the President)

My research areas are molecular microbiology and structural biology. It is easy to understand the amino acids sequence of protein, however, understanding the three-dimensional structure and functions of the protein from the amino acid sequence is difficult. Thus, in order to make clear the protein functions from the three-dimensional structure, we employ the X-ray crystallographic analysis after the crystallization of the target protein (enzyme), which are useful in medical and pharmaceutical sciences. Lately, our contribution to community has been attracted a lot of attention, and there have been some small jokes that perhaps we have given up fundamental research, but through synergy, fundamental research which makes use of structural biology techniques is going exceedingly well. 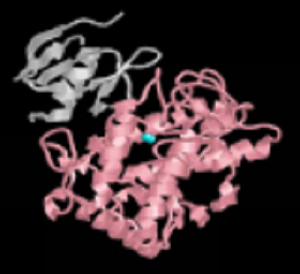 Crystal Structure of Tyrosinase Which Functions as the Melanin-Synthesizing Enzyme

Tyrosinase (pink) is an enzyme which catalyzes the synthesis of the melanin pigment, which is the source of spots and freckles. This figure shows the three-dimensional structure of tyrosinase complexed with the caddie protein (gray) derived from Streptomyces castaneoglobisporus. The protein, designated caddie, which delivers copper ions to tyrosinase.

It all began with sake lees. Then, from a hypothesis, the story began.

In the fall of 2002, an official from a sake brewery in Hiroshima Prefecture came to visit Professor Sugiyama with a request: "For many years our brewery master, a technical expert in the art of brewing sake, has been complimented on his white and healthy looking skin. Since we'd like to effectively use leftover sake lees, we'd like you to scientifically research healthcare uses for sake lees."

At the time, Professor Sugiyama's lab had created a melanin-synthesizing E. coli by gene manipulation. When the sake lees (sake lee powder produced by freeze-drying the lees from the brewery) were added to the E. coli culture, the bacteria did not produce black pigment. Based on this experiment, Professor Sugiyama has hypothesized that the sake lees contains some substance which prevented the catalytic activity of tyrosinase which produces melanin. He was successful in determining the chemical structure of the tyrosinase inhibitor contained in the sake lees.

While looking for more uses for sake lees, he hypothesized that sake lees might be effective for atopic dermatitis and tried using an ointment which contained the sake lees on animals with skin inflammations. He saw an improvement in the dermatitis and determined the material responsible for it. 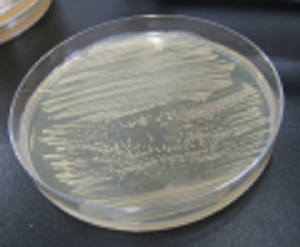 Surprising things from surprising places + Never Give Up = Dreams

A coordinator from the Ministry of Education, Culture, Sports, Science and Education's Knowledge Cluster Initiative (Hiroshima Biocluster) who heard Professor Sugiyama's story, requested that "perhaps the Professor's research results could be used in functional health product development in order to revitalize local industry in Hiroshima," and the research carrying the ideas has been employed as the "Sugiyama Project."

Coincidentally, at the same time, the Functional Food Research Association, which had the participation of local businesses, and was a part of a larger lateral project between several types of technological centers in Hiroshima prefecture, was organized. Through the adoption by the Knowledge Cluster, Professor Sugiyama, who was working as an Executive of the Association, was asked by a young researcher if there was anything a local dairy industry maker could do to contribute. At the time, research into functional health care with sake lees was progressing, and when they tried some pasta sprinkled with sake lees, they discovered that it was not only delicious, but had a richness in taste. So, the Professor has suggested that perhaps if sake lees were added to yogurt, it would turn the yogurt into a product with healthcare properties and a unique flavor. The researcher immediately came to the lab to collect the sake lee powder and within one week, returned with a finished trial product.

On the other hand, when plant-derived lactic acid bacterium isolated from a carrot was grown in Hiroshima-produced mandarin orange juice supplemented with a small amount of sodium glutamate, Professor Sugiyama discovered that the microorganism can produce a large amount of GABA (aminobutyric acid), an amino acid with blood pressure reduction functions and anti-stress properties. Using that technology, "GABA-rich yogurt" which contains GABA produced by the lactic acid bacterium in the fruit juice, has been created. New functional food products from other local food industries are being produced such as pickles, plum liquor, fruit jellies, and more. The safety of plant-derived lactic acid bacteria has also been confirmed, giving peace of mind to consumers.

Plant-derived lactic acid bacteria have ties to joint research contracts with a majority of prefectural businesses, as well as to international academic-industrial alliances (provision of patented technology) with overseas enterprises (such as major dairy manufacturers in Korea). Through these, industrialization is advancing. In the future, there are plans to promote the international development of HU plant-derived lactic acid bacteria fermentation technology not only in Korea, but also in East Asia (including Taiwan) and in Europe.

As the products from this industry turn toward national sales, the Hiroshima University brand “BioUniv Hiroshima” was launched and a logo was designed. The logo for BioUniv Hiroshima can be found on the products. As a registered trademark of Hiroshima University, it is a symbol that HU has provided the technology for the product. Professor Sugiyama would be happy to see a portion of the sales HU-trademarked products go to a fund for university researchers to be able to provide an award for young researchers. 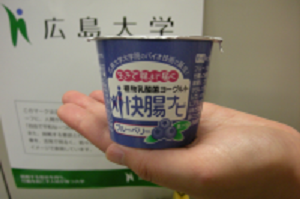 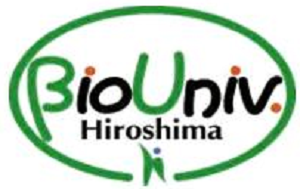 My Goal is Useful Research.

For example, if a functional food product is successfully developed, and if that product were certified as a "Food for Specified Health Uses" (FOSHU), the product would then gain the black seal of the Ministry of Health, Labor, and Welfare, meaning that the product has health benefits. However, the examination fees for certification generally run from tens of millions of yen to one hundred million yen, making it a very high hurdle for small to mid-sized businesses. According to Professor Sugiyama, the role of the government in creating a lower-cost testing system is essential, and it is expected that universities fulfill their roles in technology development. He believes that a good scenario would be that the universities provide research seeds and work together on technological developments with industries. They patent a product, and when it becomes operational, universities receive a licensing fee, part of which is returned to the faculty. Up until now, it was believed that rather than beginning a business yourself, going through a small or mid-sized company was preferable, however, as of late, there are many who advise that we take a look at establishing university-developed venture enterprises as well.

In April 2007, the Department of Molecular Nutrition Sciences was established in the Graduate School of Biomedical Sciences, Hiroshima University, as a result of Professor Sugiyama's hard work and the cooperation of Dean Dr. Y. Usui, Vice President Dr. O. Yuge, and Hospital Director Dr. T. Asahara (currently President of Hiroshima University). The Department has been established as the result of voluntary donations from 16 local food production companies and pharmaceutical businesses, as well as Hiroshima University Alumni. The Department conducts "Clinical Trials" which verifies the health functionally of food products with the cooperation of a doctor in the Hiroshima University Hospital. By holding the functional food clinical pathology evaluations, it is hoped that not only will it contribute to regional Hiroshima food manufacturing industries, but it will also widely contribute to domestic industries planning to apply for "Food for Specified Health Uses" certification.

Professor Sugiyama has recently discovered that a novel substance produced by a plant-derived lactic acid bacterium which inhibits effectively the growth of Helicobacter pylori. The bacterium is known to cause gastric ulcers. The effective production for the anti-pylori substance has been submitted for patent. It is hoped that this will be the key to creating the long-awaited anti-Helicobacter pylori food products. 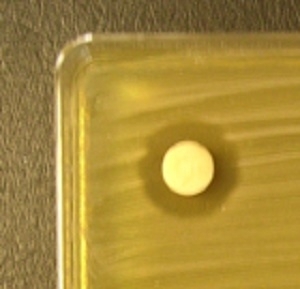 A white paper disk, which has been soaked with a supernatant fluid from the culture of bacteriocin (polypeptide carrying the antibacterial activity)-producing lactic acid bacterium is placed on a nutrient agar-medium covered with bacteriocin-susceptible bacterium and incubated overnight at 37 celcius. If the anti-bacterial activity is present on the disk soaked with the supernatant fluid, the inhibition zone (the black-looking portion) can be observed around the paper disk. 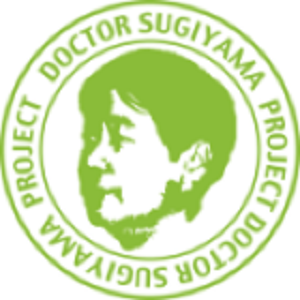 As we do not know where plant-derived lactic acid bacteria are, it's sort of like a type of insect collection. I still go out to botanical gardens even now looking for them. These works were particularly memorable. Taking his mother's words, "Become a person who is helpful to others" to heart, Professor Sugiyama is likely still out and about collecting the plant-derived lactic acid bacteria. While interviewing him, he didn't appear to have the time to go out and collect as he would like, and it made me wonder that if someone could just give him the gift of time, it would surely be appreciated.