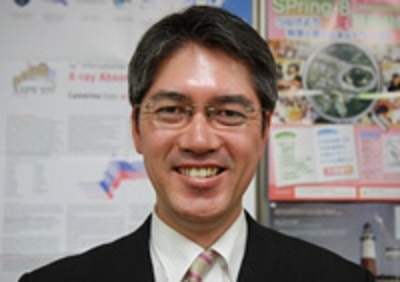 In this edition of Research NOW, we interviewed Associate Professor Akio Kimura of the Department of Physical Sciences, Graduate School of Science.

Professor Kimura’s specialization is solid-state physics. Of the many topics in this field, his life’s work and central-most research is photoelectron spectroscopy. In photoelectron spectroscopy experiments, which make use of properties of electrons and light, one can learn about the state of electrons within various types of solid objects. These experiments make use of the equipment in the Hiroshima Synchrotron Radiation Center (HiSOR) on campus. The Center is home to many types of equipment for the fabrication, observation and evaluation of materials at the nanoscale (1 nanometer = 1.0 × 10-9 meters). Through photoelectron experiments using this radiation, the professor is able to look at the state of electrons in matter and work toward explaining the make-up of matter at the electron-level.

Matter can exist as a solid, liquid, or gas. However, at the very base level, they’re all made up of atoms. Electrons are made up of the nucleus at the center and the electrons which orbit around it.

When a solid matter is exposed to light (light with a certain energy), the matter absorbs that energy and its electrons jump. This is called photoelectric effect. “Using the number of electrons (photoelectrons) which jumped as a function for measuring the energy is photoelectron spectroscopy. Using this, it’s possible to understand the state of electrons inside materials. Photoelectron spectroscopy is used for chemical element analysis (for example, figuring out how much iron is in something, etc), and using them, we can come closer to unraveling the make-up of super-conductors (why they come super-conductors, etc), which remains a mystery even today,” says Associate Professor Kimura.

Of the various types of light, there are 2 special varieties called “vacuum ultraviolet rays” and “soft X-rays”. These rays are absorbed by the air, and thus are not present on the surface of the Earth. In Associate Professor Kimura’s research lab, these 2 unique rays are created as synchrotron radiation and used in photoelectron spectroscopy experiments. 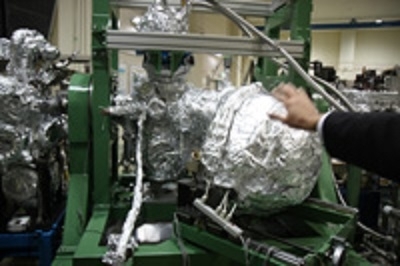 Equipment for experiments in HiSOR.

Electrons, which circle the nucleus of an atom, move around one axis like spinning tops. This is called “electron spin.” They can rotate to the right or to the left, however, the direction of the spin (up, down, sideways, diagonally) can, according to the professor, normally be controlled through the use of an outside magnetic field.

There are countless electrons within the crystals of solid matter. By having all the electrons spin in the same direction in magnets, it produces a strong magnetic force. However, in non-magnetic materials, the direction of the spin is not uniform, thus it does not produce magnetic force.

By looking closer and closer inside the crystals of solid matter, atoms are aligned periodically in a conventional, 3D way. In physical terms, this is called “translation symmetry”.

The professor explains: As the cut surface’s atoms only have a 2D periodicity, the movement of the electrons is limited to a 2D plane. The direction of the spin of electrons in a 2D plane is not uniform. By applying a potential gradient directly to the surface, it created polarized spin electrons in the same direction. Interestingly enough, this happens not just for magnetic materials, but also in non-magnetic materials as well. This is known as the ‘Rashba Effect’ and this is where our discovery comes in.” 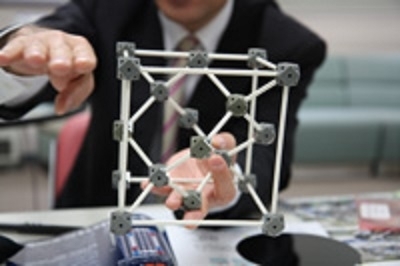 Model of a crystal structure. This pattern continues up, down, left, horizontally, and perpendicularly. 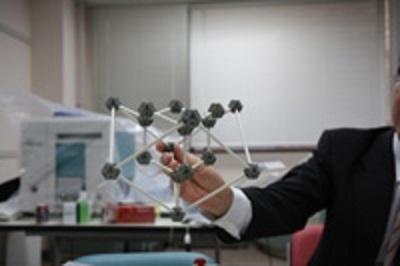 In the experiment, the professor was examining the electronic energy band structure and its spin on a silicon surface, often used in semi-conductor devices, which had absorbed thallium.

An experiment was conducted with photoelectron spectroscopy using photoelectric effect as a way to observe the electronic state on the surface. It was then exposed to light with a certain wavelength, and the number of released electrons was then measured as a function of the kinetic energy.

“In all of our experiments up until now, it was normal to only use a detector for right or left electron spin. However, this time, we tried using a detector for vertical spin. It was then that we were able to observe something which had never been observed before: the vertical movement (or “standing”) of electron spin,” says Associate Professor Kimura, his eyes shining.

“The condition for surface make-up in which electron spin “stands up” is that the cut surface must possess a very unique composition – even if the surface is turned 120 degrees, the atom arrangement must remain the same, centered on a single atom. Surfaces such as these are said to possess “3-Fold Rotational Symmetry”. This is symmetry for 2D crystals. However, if you place a mirror along the side, it will lose its right-left symmetry. Through our experiment, we discovered that it is this loss of symmetry in the mirror that causes the vertical spin,” explains the professor. 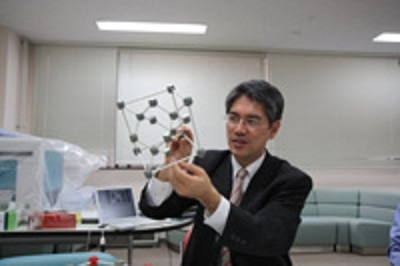 With Just a Single Electron, Information Transmission is Possible.

“Thanks to the results of our research, which allowed us to observe vertical spin, it’s possible to dramatically increase the effectiveness of information transmission, making faster, multi-functional, and low power consuming devices possible. To put it a bit extremely, if you have one vertical spin electron, it’s possible to transmit information,” says the professor with high hopes for the next generation of semi-conductor devices.

“Finding the reason for why a certain phenomenon occurs is tremendously important. This isn’t limited to just research – physics is connected to all kinds of phenomena that occur all around you. For example, you’ll find the phrase ‘Perpendicular Magnetic Recording’ on many HDDs nowadays. I want people to take an interest in physics around them by asking “why perpendicular?’” says the professor. 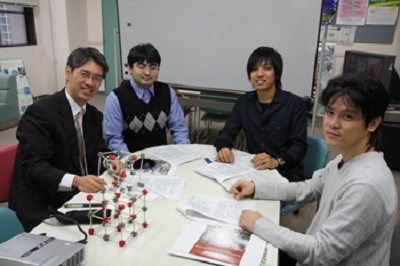 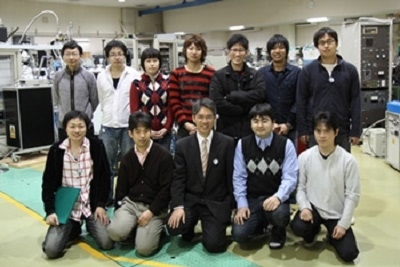 With researchers and students at HiSOR.

“Hiroshima University is home to the Hiroshima University Synchrotron Radiation Center (HiSOR). By having this Center on campus, it’s not only convenient for students, but it gives them the chance to perform radiation experiments with a laboratory mindset,” says the professor of the excellent research environment that the Center provides.

The professor encourages students with a passion for synchrotron radiation, hoping that at HiSOR, researchers from around the world can get a feel for cutting edge research, and will take the experience of being involved in such research with them into the real world.

“When experimental data comes in during the middle of the night, it’s really exciting – you’re able to see phenomena that no one else has ever seen. Then again, there are times when you miss those chances. That is why it’s important to stay vigilant, so that these chances are not missed. Sometimes, it gets really difficult, but, it is because of my interest in the field that I’m able to bear those times,” says the professor, and I’m impressed at his ability to so neatly sum things up.

After the interview, he guided me around HiSOR. There, I saw a large group of students. The faces of these young researchers, fascinated with the experimental equipment before them, left a deep impression on me. (W)