Success in the preparation of a compound that reduces the risk of spreading of influenza! 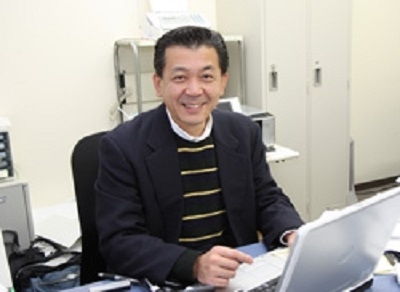 Professor Nikawa’s specialty is Oral Biology & Engineering. After obtaining his doctorate at the graduate school of Biomedical Sciences in 1990, he studied functional recovery by using biomaterials on loss of functionality that comes together with defects in the oral cavity, jaws or face. When patients who have a  teeth defect that deteriorates the condition in the mouth , because they cannot brush their teeth neatly after treatment complained that “the teeth decay soon after prosthodontic treatment”, Professor Nikawa started research in 2002 on immobilizing anti-microbial agent (a disinfectant) wondering whether growth of bacteria could be prevented using anti-bacteria treatment of the teeth.

Professor Nikawa’s first research aimed for antimicrobial agent for teeth, implants, dentures etc., but not only due to technical difficulties, but also due to wearing out of teeth themselves, these did not have the lasting effect compared with prior antibiotics than the professor thought they would have. So, the professor was considering other ways for a simpler and lasting effect like in food or in mouth wash. In 2007, he started a joint research with a chemical company assuming that know-how on the development of anti-microbial dental cleanser could also be used for detergents used to wash clothes.

The professor then developed a new detergent enabling anti-microbial finishing every time when washing clothes. In order to commercialize this product, professor Nikawa established a Hiroshima University based venture company called Campus Medico on April 22, 2009 (an article on this was placed in Chuugoku Shimbun newspaper of April 23).

The anti-microbial agent of this detergent binds with the surface of the textile of the clothes for a long time and has therefore a persistent effect. In an experiment (of soaking a cloth for 3 minutes, then wring and wash it with water for 5 minutes) according to the testing method as regulated in JIS, the number of bacteria (the staphylococcus aureus) put on a towel using an ordinary detergent grew from the initial 10.000 to a thousand~ten thousand fold after 18 hours, while no bacteria were detected using the new detergent.. Even after washing for 50 times the anti-microbial agent didn’t come off. 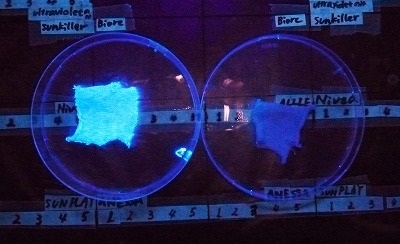 A piece of cloth was soaked in a disinfectant and then wringed and washed with running water. When using a special reagent to see to what extent the effect was remaining, this was the result….(left: adhesive detergent, right: ordinary commercial detergent).

Safe and easy to use

Immobilizing detergents are used in the industry and in order to melt it, an organic solvent is needed. The new compound (Etak) that professor Nikawa developed this time is a totally new compound, namely an ethoxysilane with quarternary grade ammonium salt (the disinfecting substance). 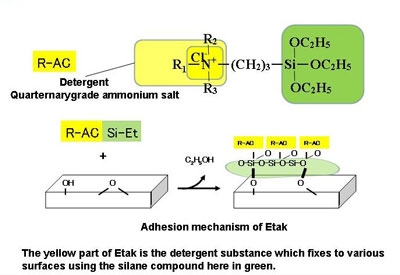 It is a substance that was originally developed for the oral cavity and is thus not only safe to the body (even factories don’t need special facilities), but is also highly anti-microbial and the liquid concentrate can be solved in water, ethanol or in a solvent that is a mixture of these two (in other words, dilution in a safe solvent). A small concentration of about 0.06% can fix itself on textile, wood, metal etc. in a few minutes. Moreover, it is easy to use at room temperature (no need for high temperature or special working environment). 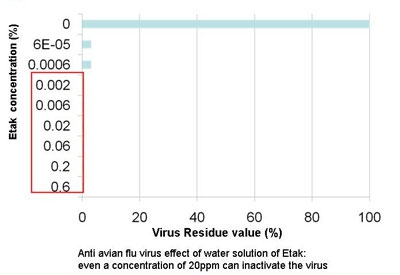 The bactericidal activity of ordinary detergents reduces or disappear when it dries, but when spraying this adhesive detergent on for example a desk and then spreading it thinly over the surface, the disinfectant agent (bactericidal substance) binds through reaction (chemical binding) with the surface of the desk and thus maintains its anti-microbial activity even when becoming dry. The professor then explains that bacteria that fall on the desk after anti-microbial treatment will be sterilized upon touching the desk reducing the number of bacteria floating back into the air giving expectation of reducing the risk of spreading of airborne infection (Note 1) or contagion (Note 2). 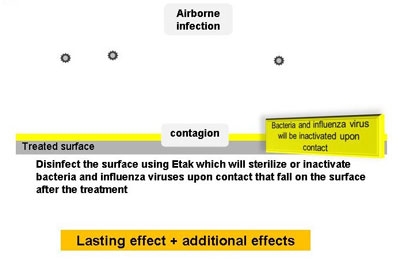 The effect on staphylococcus aureus, MRSA, staphylococcus epidermidis, bacillus cereus, tooth decay, B-coli O-157 have been confirmed, but unfortunately there was no effect on the norovirus (Note 3)

Note 1: airborne infection is infection where only the nuclei of influenza from small particles flown around from coughing or sneezing float in the air without their liquid substance and is inhaled by people in the same space or by people just coming in. It is also called droplet nuclei infection. In the winter season when the air in the rooms is dry and the temperature low, the infectiousness of viruses continues for a longer time and it is therefore that influenza is prevalent in the winter.
Note 2: contagion is the infection where droplets from people infected with influenza stick to all kind of things and is spread when touched by other people. The influenza virus is believed to penetrate the body through the membrane of the nose, eye or nose etc.
Note 3: Please refer to “discovery of anti-norovirus effect in persimmon” for the introduction of a research on norovirus by professor Tadashi Shimamoto, chair of Food Science and Biofunctions, Department of Biofunctional Science and Technology, Graduate School of Biosphere Sciences, Hiroshima University.

*Click here for the homepage of professor Shimamoto’s laboratory of Food Science and Biofunctions. (Japanese Page)

Confirmation of effect on the influenza virus!

Measurers to stop the epidemic of the H1N1 influenza (swine flu) for individuals are wearing a mask and the common practice of gargling and washing hands and for public transportation and schools the disinfection of hands by using disinfectants. However, lately, even in the summer when the activity of normal viruses becomes inert, the strength of this virus doesn’t reduce as expected. Moreover, the virus reaches its peak in November, which is outside the raging season. 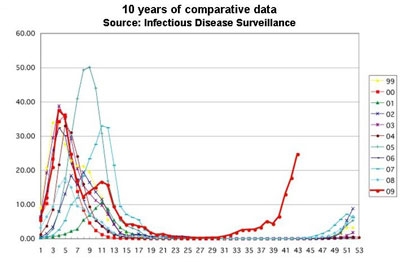 According to comparative data on influenza of the past 10 years as of November 10 2009 21:00 provided by the Infectious Disease Surveillance Center, 159,651 cases have been reported in week 44 (from October 26 to November 1) meaning 33,28 reported cases per visit (number of patients per medical institution in one week), which has raised the alarm level to that of an epidemic.

The professor says that another rise of the swine flu this fall might be terrible, but bird flu is terrible as well since birds become a medium and spread the virus throughout the world. If this detergent is effective on bird flu etc., then there is a possibility that the detergent is also effective on the swine flu. Considering that the anti-microbial treatment on linen, floors, desks etc. used in public facilities like schools, hospitals and hotels and seats public transportation facilities might be linked to the prevention of the spread of infection, I requested professor Takemasa Sakaguchi of Biomedical Sciences of Hiroshima University in May 2009 to collaborate in a research on the anti-microbial effect on influenza viruses of this detergent. 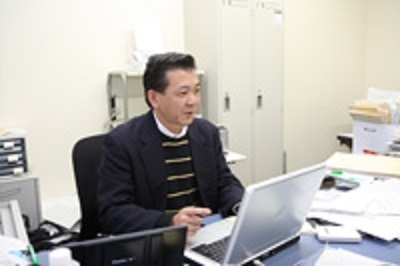 The new virus doesn’t seem to slow down a bit. It will be terrible if we don’t do anything about it.

Then, on September 17 2009, professor Nikawa received the news that the persistence of the anti-microbial effect over a specific period was confirmed and he announced that he succeeded in making a new compound with the detergent substance already used as a detergent in medical facilities that can apply anti-microbial treatment on the surface of furniture in schools and seats in public transportation facilities.

The detergent can bind at room temperature and within a few minutes. Its anti-microbial effect in the laboratory still lasts even now after around half a year after the start of the experiment. It is believed to last for more than half a year on the surface of desks etc. to which it is applied as long as the surface is not worn. Professor Sakaguchi mentions that “the detergent has a strong effect on influenza viruses., The concept of an adhesive detergent is unique”.

Does it work on all viruses?

“It does not work on all viruses. We confirmed effectiveness only on enveloped viruses”, professor Nikawa replies regretfully.

Most part of the envelope consists of lipid and can be easily destructed when treating it with ethanol or an organic solvent. Therefore, enveloped viruses are generally easy to inactivate using alcohol used for disinfection than compared with non-enveloped viruses.

Furthermore, professor Sakaguchi confirmed that this detergent is also effective on the H1N1 virus according to new data and is still continuing experiments today. 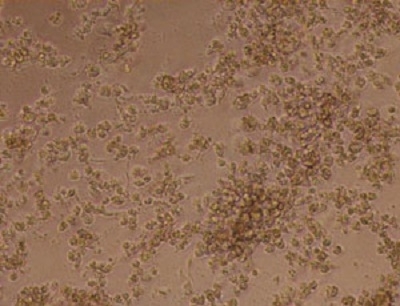 The dark colored looking particles are dead cells that have been infected with the swine flu. 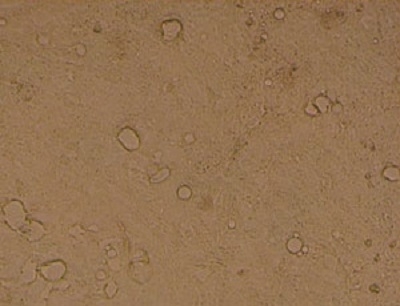 Cells that are protected with only 0,06% of adhesive detergent.

There are 3 types of influenza; A, B and C among humans. Only type A and B are infectious. The new influenza that is the topic of today is of type A. The protruding part on the surface of the influenza virus, namely the glycoprotein sticks to the cell (receptor) of birds, pigs or humans and infects it.

Since the virus is originally reported as originating from swine flu H1N1, it is now known as the “swine flu”, but in April of 2009 WHO announced the change of the name into “Influenza A (H1N1) 2009”. This year since it is a new epidemic among humans, it is generally called “new influenza” and is feared because of the possibility of infecting immune deficient humans or causing serious pneumonia that can be lethal.

The detergent hardly fixes to resin, PVC, acryl etc. , but since it is fixes to cloth and linen it also can be used on textile sofa and the backrest of chairs. Use on nonwoven cloth of masks and air conditioning filter is OK too. 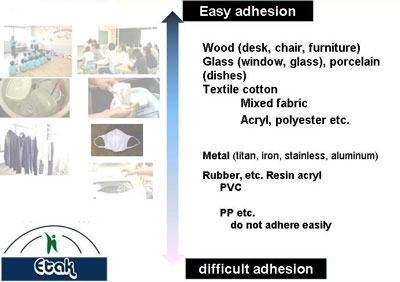 Adhesion onto resin and the like is difficult, but is possible on a lot of materials.

Kurabo textile department (based in Osaka) which conducts collaborative research with professor Nikawa and which tackles the development of mass production technology of “anti-influenza virus functional textile, announced on October 19 that it will start mass production of textile materials (sanitary textile products, clothes, products used in the living room, medical materials) with sales start targeting November 2009 and a plan for deployment in industry fields like unwoven textile and filters etc. through collaboration with related companies. Furthermore, building maintenance, chemical/pharmaceutical manufacturers are preparing in the same way towards early utilization by themselves.

The professor expects this technology to be used in educational facilities and public transportation and to be widely deployed in businesses related to hotels, cleaning in hospitals, linen, laundry or to clothes in general households and contribute to the reduction of risk of spreading of bacteria and viruses. His last words before disappearing on his way to his laboratory together with his students were that he would be happy if it will be that way.

Professor Nikawa selected the silane compound as fixing material to fulfill the adhesive role of the anti-microbial detergent. To my question “how many mediums did you try?”, the professor smilingly replies that “actually the first match had an effect what surprised me. I was really lucky. Would you call this beginners’ luck as well?”. However I can easily guess that this is not just beginners’ luck, assuming that the bulk of all the research so far may have backed up the intuition that it might work out well. It seems that the professor receives many wishes to certainly try the detergent from schools that just had to stop classes for certain classes or grades because of group infection of the influenza virus and from tourist organizations which are heading for the tourist season in fall, but the professor regretfully says that he will not be able to meet all demands. I cannot forget the happy face of the professor who could not attend the gift ceremony of the detergent from Hiroshima University to Shinonome Elementary School due to a business trip after showing him the pictures of the children when reporting to the professor on this. Professor, even I am looking forward to the commercialization of your product. (O) 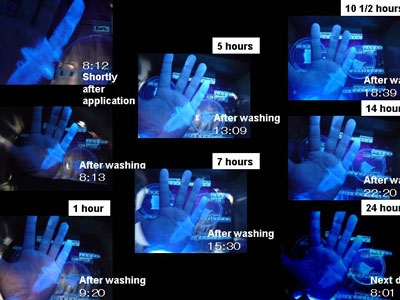 The mischievous professor experienced the fixation onto skin using his own hands (his little finger). Even after bathing, the effect still remained the following day.