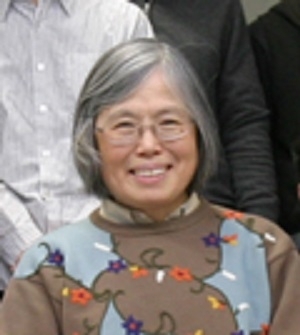 In this edition of Research NOW, we interviewed Professor Mitiko Miura-Mattausch of the Graduate School of Advanced Sciences of Matter.

(2008 March 10th, Interviewed by the Public Relations Group, Office of the President)

Hiroshima University has been jointly developed the innovative transistor model HiSIM (Hiroshima-University STARC IGFET Model) under the support of the Semiconductor Technology Academic Research Center (STARC), comprised of 11 Japanese semiconductor enterprises. The extended version of HSIM, HSIM-LDMOS, developed for the highly resistive next generation transistor LDMOS, was selected as a global standardization model in December 2007. This was the first time ever in Japanese history that a transistor model for circuit design, born of university-industry collaboration, was recognized globally.

The Moment When the Origin of LDMOS Was Realized

Until now, we didn't have a very clear grasp of LDMOS' functional mechanisms. As we couldn't clearly understand the reason for unexpected observations, we could neither control them nor create an accurate transistor model. While repeating measurements and simulations on the resistive transistor functions, we gradually came to learn LDMOS' characteristics. It seemed that "the origins were in the non-linear feature of the high electrical resistance parts, which were created to make the transistors capable for high-voltage appliances." That was also the moment we were convinced that it was possible to create a high-accuracy transistor model. 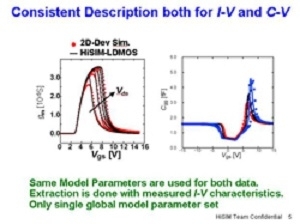 Simulation results which clarify LDMOS' origin of characteristics and comparison with actual measurements.

The Advantage Gained in Semi-Conductor Development Was Substantial

More than anything else, the significance of gaining the global standardization model is the fact that prompt checks of our research through the close connection of industry, university, and even government at Hiroshima University became possible. Also, as the test results are your own results, we can look forward to the effect of increased international collaboration in the semi-conductor industry. With increased international competitiveness in the Japanese semi-conductor industry, it opens the possibility of developing products which consume even less electric power.

Without the Cooperation of Industry, University, and Government, We Wouldn't Have Succeeded.

This was not HiSIM's first time in trying to become an international standardization model; during the standardization of the normal MOS FET model decided in December 2005, HiSIM experienced a bitter defeat by a narrow margin to a team of both Americans and Europeans during the final voting round. Despite having advanced technology, we lost to strategic tactics... However, what we learned from our mistakes was great.

What was necessary for us to attain the international standardization model was:
-Strategy
-Words (the skills to debate/discuss)
-Solidarity

According to a member of METI (the Ministry of Economy, Trade, and Industry, these 3 elements are crucial to success. With this in mind, we began by drawing out a strategy with the help of METI, the New Energy and Industrial Technology Development Organization (NEDO), and the Semiconductor Technology Academic Research Center (STARC).

"By joining together and cooperating for the sake of a single goal, we were able to gain the power to resolve issues which no single university organization can achieve on its own, and we also gained the ability to debate with overseas organizations with confidence. I believe that combined with the accuracy of the HiSIM model, it was the fact that we were able to realize our power as a team which was a key factor in gaining the global standardization model."

Professor Miura believes that the most important duty of a university is fostering the next generation of human resources.

"It can be said that it is becoming an age where in the near future, things will be decided by global conference, and because of this, we can no longer afford to be the 'big fish in a little pond' or unaware of the outside world any longer. I want students to look at the broader world. We offer the opportunity for students to study for several months at universities or industries abroad for credit. Joint research with STARC is also becoming a huge motivation factor. Both now and in the future, I give my all to foster students who can debate fiercely, hold their to their own ideas, and who have the ability to lead the way for what they believe is right." 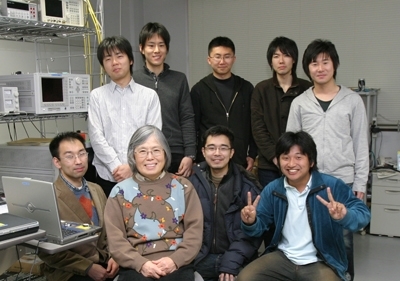 The professor with the students in her research lab.

I get the impression that one of the largest factors in achieving becoming the first global standardization model selected in Japan is in Professor Miura's attitude of taking good care of others. Research requires many long and hard hours. During those hours, Professor Miura supervises the students who undertake research with her with both strictness and kindness. I watched as, smiling, she spoke with students, and thought that this must be what they call "the transfer of intelligence." (T)