We discovered a new species of frog on Sado Island, in the Sea of Japan! We’ve named it the sadogaeru (Sado frog). 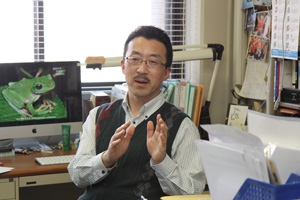 A research group led by Associate Professor Miura of the Graduate School of Science discovered a new species of frog on Sado Island, Niigata Prefecture, which they named the sadogaeru (Sado frog). This marked the first time in 22 years that a new species of frog had been found on Honshu, since the discovery of the nagaretago-gaeru (stream brown frog, Rana sakuraii) in 1990. Furthermore, the sadogaeru is the first vertebrate to be discovered that is endemic to Sado Island. This discovery was published in the December 7, 2012 online edition of Zootaxa, an English-language academic journal of taxonomy.

The most famous creature on Sado Island is the toki (crested ibis, Nipponia nippon), but the sadogaeru could in future become one of the creatures that symbolizes Sado Island, along with this bird. We interviewed Associate Professor Miura, who made this precious discovery.

Associate Professor Miura’s specialism is genetics, focusing in particular on research into the tsuchigaeru. “The tsuchigaeru inhabits all areas of Japan. Its back is brown and has numerous small oblong protuberances (warts), each measuring just a few millimeters, so one couldn’t really describe it as beautiful, even if one were being polite. In addition, its buzzer-like croak isn’t a particularly pleasant sound. If you touch it, it gives off a peculiar, pungent odor. It has hardly any qualities likely to endear it to humans,” says Associate Professor Miura.

Perhaps because of its appearance, the tsuchigaeru has rarely been the focus of research until now. Associate Professor Miura realized this and began to study it. As a result, he discovered that the tsuchigaeru has some very unusual characteristics, genetically speaking.

This recent discovery was triggered when Kunio Sekiya, then a researcher at Niigata University, got in touch with Associate Professor Miura and sent him a photograph, accompanied by the message “I’ve found a strange frog on Sado Island. It looks like a tsuchigaeru, but it’s not. As an expert on the tsuchigaeru, could you please take a look at it for me?” When Associate Professor Miura looked at the photograph, he could see that the strange frog resembled the tsuchigaeru in terms of the pattern on its back and its color, but its abdomen differed considerably.

Where did this strange frog come from?

In order to investigate whether the frog in the photograph was a tsuchigaeru or a new species, Associate Professor Miura acquired some of the strange frogs from Sado Island and first of all examined their chromosomes. In addition to the genetic sex determination mentioned earlier, tsuchigaeru in Japan can be classified into five groups on the basis of differences in the shape of a particular chromosome. When Associate Professor Miura compared the chromosomes of the frogs in these five groups and those of tsuchigaeru from the Korean Peninsula with the chromosomes of the strange frog from Sado Island, he discovered that those of the Sado Island frog differed from those of tsuchigaeru inhabiting the Niigata area, off the coast of which the island lies, but were identical to those of the Japanese tsuchigaeru group that inhabit the Kanto area and those of the tsuchigaeru inhabiting the Korean Peninsula. When he then investigated the genes in the mitochondria, he found that the sequence differed from that of the Korean Peninsula tsuchigaeru, but was similar to that of tsuchigaeru inhabiting the Kanto area. He ascertained that the difference between them was about 4%. Although “about 4%” might seem like a small difference, in the world of biology, this is apparently regarded as being a different species.

As well as the genes, there are morphological differences (differences in shape) between them (Figures 1 & 2). In addition to the yellow abdomen with no blackish spots mentioned above, the frogs found on Sado Island had other characteristics not seen in tsuchigaeru, such as being completely smooth and the lack of a vocal sac that inflates when males of the species croak, in order to amplify the sound. Moreover, the croak is quieter than that of the tsuchigaeru, sounding more like a murmur.

Based on the differences in genes and morphology, Associate Professor Miura’s research group embarked upon a more in-depth study, believing the frog found on Sado Island to be a new species of frog, rather than an existing tsuchigaeru that someone had brought to the island. 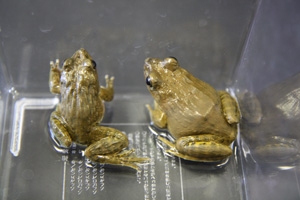 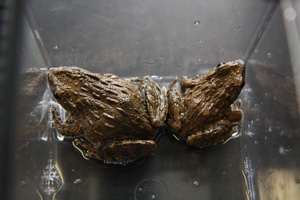 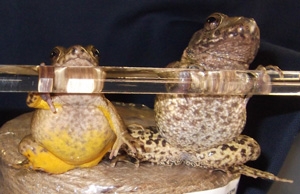 Currently, the mainstream definition of a species in biology is “a group of organisms that are capable of interbreeding with each other, but cannot breed with any other organisms.” Accordingly, it was necessary to investigate in detail whether the frogs found on Sado Island and the tsuchigaeru

The first two questions could be answered by observing the frogs, but the question of whether they could reproduce after interbreeding was not one that could be answered within a single generation of frogs, but required ongoing interbreeding over several generations. After more than a decade of experiments, the research group discovered that almost all of the hybrid frogs born as a result of interbreeding were males, with hardly any females. In addition, the males had extremely few sperm, while the ovaries (reproductive glands) of the females were atrophic. Even when the hybrid males were interbred with the tsuchigaeru, only a very few tadpoles were born and most of these did not mature into frogs. In other words, the research group found that even if tsuchigaeru and the frogs found on Sado Island interbred, it was not possible for them to reproduce.

Based on this outcome, Associate Professor Miura’s research group determined that the frog found on Sado Island was a new species that differed from the tsuchigaeru. They named it the sadogaeru and published their discovery.

Research results that only Hiroshima University could have achieved

The interbreeding experiments using the sadogaeru required that hundreds of frogs be reared from spawn and continuously observed over several generations, which took more than a decade. Associate Professor Miura says that feeding the frogs was a particular struggle. “Crickets raised at our facility for feeding purposes are used as feed for frogs, but you need a constant supply of crickets of the right size for the frogs to eat, depending on their growth stage.”

There is only one place in the world with the technology and equipment to carry out this kind of large-scale, long-term wild frog interbreeding experiment, and that’s none other than the Institute for Amphibian Biology at Hiroshima University’s Graduate School of Science. It truly is unique.

The scientific name for the sadogaeru is Rugosa susurra, which means “murmuring frog” in Latin. Unlike other frogs, which are capable of making their croaks more resonant, the sadogaeru has a quiet, murmuring croak and it was from this that its name was derived. There are those of the opinion that they remained undiscovered for so long because of their quiet croak. Furthermore, Associate Professor Miura says, “Compared with frogs such as aogaeru (shrub frogs, Rhacophoridae), which are quite appealing to the eye with their vivid green color, the sadogaeru and the tsuchigaeru look quite drab, so it’s hard to arouse interest in frogs like these. That’s another reason why the discovery took so long.” The problems faced by the sadogaeru, with its drab appearance, are the same as those faced by other frogs.

Frogs require both land and water for their habitats, but as a result of land development across Japan, the environment for frogs is deteriorating and the number of frogs is falling. The sadogaeru has only just been accepted as a new species, so no studies of the number of their habitats has been carried out yet, but due in part to the fact that their habitats are only found in the center of Sado Island, where development is progressing, it is likely that their numbers are falling, like those of other frogs.

Associate Professor Miura says, “We chose the name ‘sadogaeru’ not merely because it’s a frog that lives on Sado Island; as this frog is the only vertebrate that is endemic to the island, we also hoped to arouse greater interest in the sadogaeru on the part of the people of Sado Island, so that they will continue to protect it.”

The next steps in sadogaeru research

The vertebrates on Sado Island hardly differ at all from those on mainland Honshu, and the recently-discovered sadogaeru is currently the only species endemic to the island. Why are there no other endemic species?

Associate Professor Miura has a theory. “After Sado Island split off from Honshu 200,000-800,000 years ago, the majority of the island was probably submerged in seawater on numerous occasions, due to diastrophism. The tsuchigaeru can live on both level ground and high ground, so if it fled to high ground, it would be able to survive. Moreover, the tsuchigaeru is the only domestic frog that can overwinter as a tadpole. They probably remained in tadpole form, which enabled them to survive in an environment that killed off other creatures.”

He thinks that over a lengthy period of time, these surviving tsuchigaeru evolved into sadogaeru. Associate Professor Miura hopes that “if sadogaeru research progresses, new discoveries might be made about the geological history not only of Sado Island, but also of the whole of the Japanese archipelago.”

The sadogaeru itself has only just been confirmed to be a new species, so many mysteries about it still remain, such as “Why did the color of its abdomen change to yellow from the light brown of the tsuchigaeru?” “How many sadogaeru live on the island?” “Is their genetic sex determination ZZ/ZW or XX/XY?”

“There are still so many things that we just don’t know about the sadogaeru. I want to study them in depth and solve these mysteries,” says Associate Professor Miura, eager to take the next steps in this research. 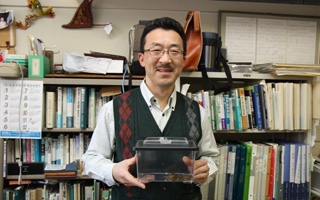 Associate Professor Miura talks about how he wants to solve the mysteries of the sadogaeru.

Sadogaeru, the new species of frog discovered on Sado Island. There are many things that we still don’t know about this frog, such as the reason why its abdomen is yellow and how many habitats it has, but it seems that this little creature – just 4-5 centimeters long – might hold the key to unlocking the secrets of the changes undergone not only by Sado Island, but also by the Japanese archipelago as a whole. But as Associate Professor Miura stresses, frogs are susceptible to environmental changes and their numbers are falling across Japan as development progresses. Sado Island is home to many rice paddies that are being used to protect the crested ibis, so these also offer a habitat for the sadogaeru. However, the situation they face in reality could be the same as that faced by other frogs. We hope that this discovery will trigger greater interest in initiatives to protect frogs and their habitats, among not only the people of Sado Island, but also people throughout Japan. (N)