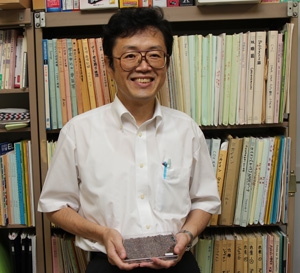 In March 2013, the research group of Professor Shinji Ohta of the Graduate School of Biosphere Science discovered that one species of insect produces within its body a lipid that has a strong antioxidant action. This is the first such lipid in the world to have been identified and it’s hoped that it will be used for such applications as cosmetics with an anti-aging effect. We interviewed Professor Ohta about the background to this discovery and its prospects for the future.

For further details of the nature of this research, please visit the Natural Product Chemistry Laboratory website (Japanese Page).

Professor Ohta’s research focuses on the chemical ingredients of the seeds of the Japanese honey locust tree (Gleditsia japonica; saikachi in Japanese) and its symbiotic relationship with an insect called the Saikachi bean weevil (Bruchidius dorsalis; saikachi-mamezomushi in Japanese), which grows inside those seeds.

Asked about the background to this discovery, Professor Ohta explains,

“This insect lays its eggs inside the seed pods of the Japanese honey locust and the larva that hatches from the egg makes a hole in the hard seed coat and burrows its way inside. Using the ingredients in the seed as its only source of nutrition, it grows and reproduces. The seeds of the Japanese honey locust contain the sugars and proteins that it needs to grow, and we discovered that they also contain a new type of alkaloid. I wanted to know whether the insect excretes this alkaloid after eating the seed or whether it uses it within its body. When we investigated what kind of chemical composition the insect has, in connection with this, we found that it has a lipid component with a very powerful antioxidant capacity, which we’ve called Dorsamin-A.” 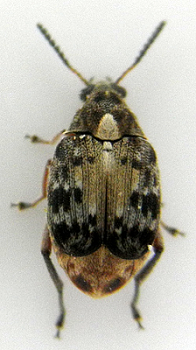 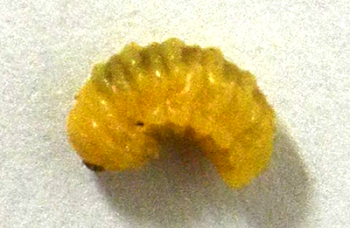 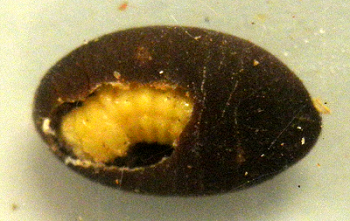 The Saikachi bean weevil has adapted to a harsh environment.

Why does the Saikachi bean weevil have this component?

Professor Ohta says, “The seed itself has very little moisture and is enclosed in a hard seed coat, so no water can get in from outside. However, the Saikachi bean weevil grows into an adult after eating only the ingredients in the seed, so it is placed in a harsh environment in terms of oxidative stress. Antioxidants are needed to protect its body from the toxic reactive oxygen species that are generated as it breathes. The Dorsamin-A in the body of the bean weevil larva is a lipid that binds to dehydroamino acid, which is something that has never been seen before, and its powerful antioxidant capacity appears to protect the body of the bean weavil larva from reactive oxygen species.”

There aren’t many Japanese honey locust trees in Hiroshima, but apparently they were used throughout Japan from ancient times.

Professor Ohta tells us, “The Japanese honey locust is a tree in the legume family (Fabaceae), which grows to a height of 15m. There’s a legend that in ancient times, whenever Prince Shotoku went to see someone who was suffering from an illness, he planted the seeds of this tree, so it became prized as the ‘medicine tree’. The tree itself is classed as a special natural monument and there are many on the eastern shore of Lake Biwa.

In summer, pods measuring around 30cm long form on the tree and the seeds inside them gradually mature through to September or October. Japanese honey locust seeds are said to contain ingredients that are effective against swelling and the seeds are sold as an oriental medicine remedy. However, until now, little was known about the ingredients themselves. In the course of this research, we discovered that Japanese honey locust seeds contain a new substance, which we called Saikachinoside A. This substance is thought to act on the nervous system and we’ve just started studying it.” 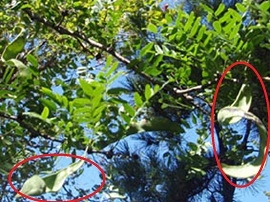 Professor Ohta says that the process of discovering a new substance involves “nothing but struggle”.

“Many of the new substances discovered are present only in minute quantities, so just extracting them is difficult. In addition, failure means that they disappear completely. That’s why there’s such a tremendous feeling of achievement against the odds when you’ve determined the structure of this precious sample and discovered that it’s a hitherto-unknown substance. Broadly speaking, 99 out of every 100 components investigated turn out to be already-known substances. Even if the other one is a new substance, only a very few of these have the potential to become pharmaceuticals. It’s difficult just to find a new substance, but you feel happiest if it turns out to have the potential to be used in a drug.”

After he has taught some of the basics to his students, he tells them to try things for themselves, using their own ingenuity.

“I want to guide them in a way that allows them to gain first-hand experience of success – even if only small successes – and to turn that into motivation for the next step, gradually achieving bigger and bigger results each time. I always tell them ‘The harder it is to achieve, the greater your joy will be when you succeed,’ in order to encourage them to dream. I praise them as much as possible, too. We experience a succession of failures – it rarely goes well. But I want to encourage them as much as possible and have them use their experiences of failure as sustenance so that they can ultimately achieve their dreams.”

Finally, when asked about his future goals as a researcher, he replies with evident enthusiasm, “I want to discover hitherto-unknown naturally-derived chemical substances and carry out development that will lead to useful applications, such as drugs to cure human diseases. Plants and microorganisms have an impact on each other, including symbiotic relationships with each other, and ecosystems are based on the balance between them. I’d like to use these relationships between organisms to achieve a better quality of life for people.”

“Dorsamin-A, which we discovered in the Saikachi bean weevil, not only exhibits a powerful antioxidant action, but also blocks UV-B ultraviolet rays. UV-B rays reach the Earth and cause skin blemishes, so we think that Dorsamin-A might have an application in anti-aging cosmetics, as an antioxidant that also offers protection against ultraviolet rays.” 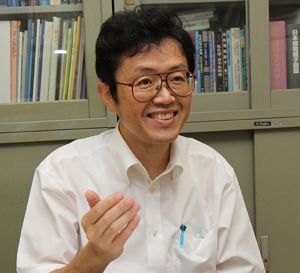 Professor Ohta tells us about his future goals.

Apparently, organisms with a symbiotic relationship, such as Japanese honey locust seeds and the Saikachi bean weevil, produce amazing substances in abundance, in an effort to extend their territory. Hearing that the substances produced by that strategy “have hidden potential to become wonder drugs that can cure human diseases,” I was reminded that humans too are part of a big ecosystem that also encompasses plants and insects. I was particularly impressed by these words from Professor Ohta. “I want to achieve a better quality of life for people, while respecting the ecosystem, which maintains a balance even as the organisms within it influence each other.” (K2)