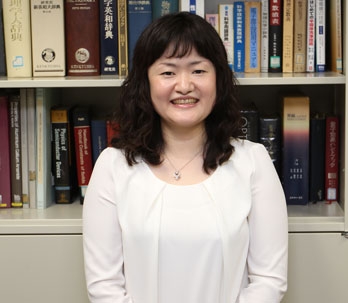 Assistant Professor Tominaga’s research focuses on the crystal growth of semiconductor thin films. In 2010, when she was still a student, she received a L’Oréal-UNESCO Women in Science Japan Encouragement Award in recognition of her achievement in demonstrating the potential for new materials for use in the semiconductor lasers required to increase the capacity of optical communications. More recently, she was awarded the 7th Hiroshima University Encouragement Award for Women in Research(*).

Despite her youth, Assistant Professor Tominaga is playing a leading role in the field of semiconductors; we talked to her about the thrill of her research and the ideals that motivate her.

(*)An award presented by this university in order to promote initiatives to support female researchers and further motivate them in their research.
Research project: Analysis of the Band Structure of Dilute Bismuthide III-V Mixed Crystal Semiconductors
Related article (Japanese Page)

Terahertz radiation is something of an unfamiliar term. What is it?

Terahertz radiation refers to electromagnetic waves with a frequency in the tera range, that is to say, 10 to the power of 12. There are various kinds of electromagnetic wave, with the radio waves used for broadcasting radio and television at the lower end of the frequency spectrum, and light – including visible light and X-rays – at the higher end of it. Research in these areas has been carried out for centuries and the practical application of the results is progressing. Terahertz radiation is located in the realm between radio waves and light. Previously, it was technologically difficult to detect the generation of terahertz radiation, so for a long time it was hardly used at all. However, due to advances in semiconductor technology for generating electromagnetic waves over the last 15-20 years, research in this field has flourished worldwide.

In general, substances are bound together by chemical bonds and intrinsic vibrations can be seen between one atom and another. One of the realms where these intrinsic vibrations are most pronounced is the terahertz band, and the vibrations make it possible to identify what bonds exist within a substance. For example, in order to investigate what ingredients a substance had, it used to be necessary to destroy it, by turning it into a powder, for instance, but terahertz radiation makes it possible to carry out very precise investigations without destroying the substance. It is anticipated that, as research into terahertz radiation progresses, technical applications will be identified in a variety of fields, including diagnostics involving pharmaceuticals, DNA, proteins, or cancer cells or other biological samples; detecting drugs at airports; estimating the age of paintings and determining their authenticity; and developing faster, higher-capacity communications.

Assistant Professor Tominaga’s research focuses on creating the devices used to generate and detect terahertz radiation. “Technologies that apply terahertz radiation are currently at the stage where the environment required for more widespread use is gradually being put in place. In order to generate and detect terahertz radiation, it is necessary to apply a laser beam to a device generating terahertz radiation. However, the laser generation apparatus available at present is bulky and takes up a lot of space, as well as being expensive, so there are challenges to be overcome before it can be installed at company premises or airports. Accordingly, in the terahertz field, it has been suggested that it could be possible to switch to using fiber lasers, which are compact and cheap, as a light source. The light from fiber lasers has a different wavelength to that of conventional laser beams, so research is going to focus on how new semiconductor devices can be applied to terahertz radiation,” she says. 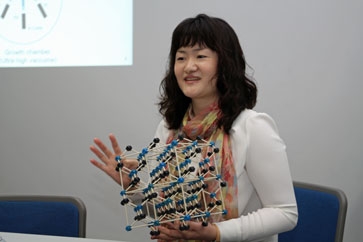 Assistant Professor Tominaga explains the basics of her research. 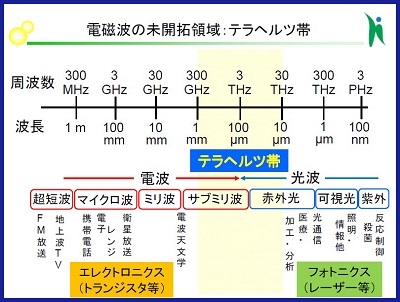 The catalyst was the beauty of the band structure.

So what motivated Assistant Professor Tominaga to focus on the field of semiconductors?Apparently, there were two catalysts for her decision.

Regarding the first, she says, “I always loved physics. My high school physics teacher said that if superconductivity could be achieved, it would be possible to use solar cells located in the middle of the desert to carry electricity to the other side of the world without any losses. I thought that this was amazing and it really interested me. As a result, I gradually decided that I wanted to study electronic materials such as superconductors and semiconductors.”

In terms of the second catalyst, she says that her strong desire to conduct research in the field of semiconductors crystallized during a class when she was a third-year undergraduate.

“In a class called ‘semiconductor engineering,’ we were taught about band structures and I found them very beautiful. In semiconductor crystals, each individual atom of which the crystals are composed is surrounded by a cloud of electrons and these clouds of electrons form a band. In that class, I discovered that it’s possible to explain the attributes of semiconductors (that is to say, their individual identifying properties – something akin to the personality, gender, facial characteristics, and skin color of a person) by discussing the movement of the electrons within that band structure, and that’s when I became aware of the beauty and intricacy of semiconductors.”

The research is low-key and it’s hard work, but the results are recognized worldwide.

Assistant Professor Tominaga describes her day-to-day research as “really low-key and a continuous struggle.” It takes at least six hours to create a single sample, and in some cases can take more than twelve hours. It takes three months or more to obtain enough data to write a paper or give a presentation to an academic society. If one is careless, there is the terrible prospect that everything one has done for the last two weeks or a month has been a complete waste of time. However, she says that the feeling of joy when she does get results makes all that hard work worthwhile.

“Before my very own eyes, I’ve been able to measure things that had been thought to be impossible! In that moment, I get so excited that it feels like my blood is going to boil. That feeling is quite addictive, once you’ve experienced it.”

During her student years, she was invited to an international conference in San Francisco, in recognition of the results of her research, which was the first study to confirm a laser beam from GaAsBi (gallium arsenide bismide), which had been thought difficult to handle in the field of semiconductors. She says that this was when she really felt that her research was rewarding.

“I still remember how pleased I was when I saw that the person reviewing my paper had commented ‘I had no idea you could do this with GaAsBi!’ Even leaving aside the fact that I was still a student, I was over the moon that someone overseas had recognized and praised the outcomes of my research. Normally, it’s low-key, but I felt a sense of hope that I might be able to see things for the first time that nobody else in the world had seen before, and I began to believe strongly that people would recognize my achievements if I steadily built up my output. That’s the driving force that impels me to continue with my research.” 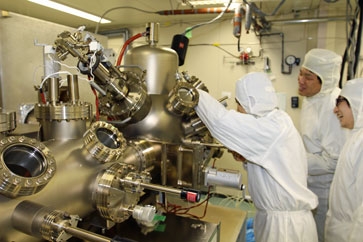 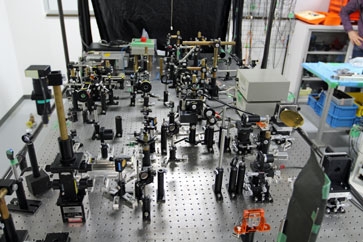 I want students to think “Why? Why? Why?” more.

Assistant Professor Tominaga teaches an experiment class called “lasers and optical communication,” which is mainly taken by third-year undergraduates. She says that something has been bothering her since she started teaching classes.

“Students want to know the answer immediately. It’s true that in many student experiments, the answers have already been prepared, unlike in normal research. It’s easy for me to tell students the answers straight away, but I think that the crux of an experiment is thinking about the process until the answer is obtained, asking ‘Why? Why? Why?’ That’s where the real interest lies, I believe.”

In addition, she thinks that student experiments by undergraduates are the first step toward carrying out graduation research and research at the postgraduate level.

“I don’t want to teach classes in which students simply write reports and earn credits, just because it’s an undergraduate class; I want them to learn how to carry out research properly. I want as many students as possible to realize how fascinating experiments are.” 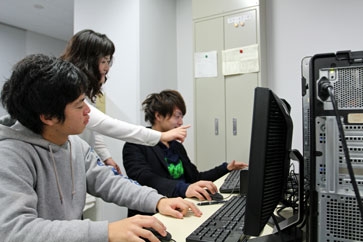 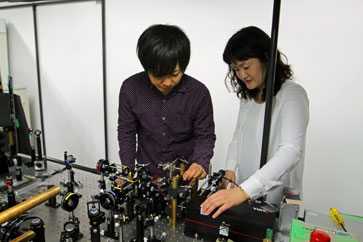 Pursuing the possibility of “bad crystals”

I want to do research that gets published in textbooks!

Assistant Professor Tominaga says that she intends to stick to the ideals that have motivated her in her research to date. 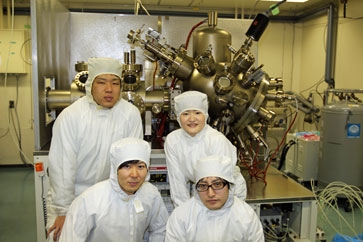 Group photograph with students from the laboratory

With the aid of slides, Assistant Professor Tominaga kindly and carefully explained terms that were hard for me to understand, such as terahertz radiation and band structures. Her warm personality was also very much in evidence when we came to photograph the research apparatus, when she asked, “I always do my research with my students as a team, so would you mind taking a photo with them in as well?” At the same time, she isn’t resting on her laurels, and her message that “I want to take on global challenges in the field of technology relating to crystals generated at low temperatures” certainly conveyed her strong sense of purpose as a researcher. I’m looking forward to the day when the results of her research are published in textbooks. (i)