Attempting to Explain the Mechanism That Triggers Volcanic Eruptions! 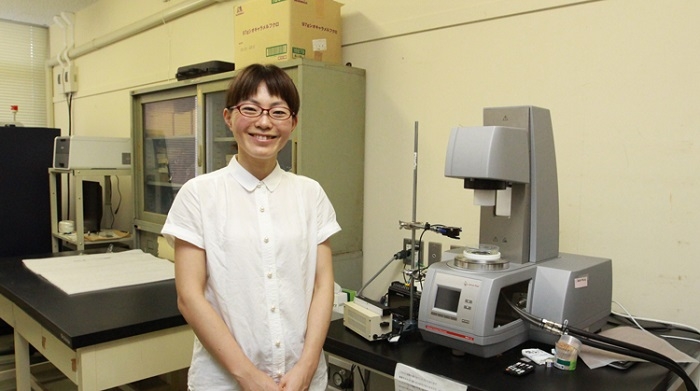 Associate Professor Atsuko Namiki’s field of study is geosciences, with a particular focus on volcanoes. Using a substance (starch syrup) that simulated the properties of magma, she conducted vibration experiments and demonstrated for the first time the possibility that sloshing* – which can trigger a volcanic eruption – could occur. Based on the results of these experiments, she explained the conditions required for the collapse of bubbles in magma. Looking at the example of the Hoei eruption of Mount Fuji (1707), she quantitatively estimated the possibility that the eruption was triggered by the Hoei earthquake. The outcomes of this study were published in the Journal of Volcanology and Geothermal Research, an international research journal published by Elsevier.

*Sloshing: A phenomenon in which liquid inside a container moves around a great deal when the container is subject to vibration

*The published paper can be found here.

There are hopes that this discovery will help to explain the mechanism via which major earthquakes trigger volcanic eruptions. We interviewed Associate Professor Namiki about her current research and its prospects for the future.

Solid earth geophysics focuses on the study of phenomena triggered by the earth’s internal structure and movements. The field encompasses a wide range of research, including not only the earth’s internal structure, but also earthquakes, volcanoes, and plate tectonics, among others. Associate Professor Namiki specializes in solid earth geophysics, with a particular focus on volcano research.

“In the language of physics, my specialist field is called ‘fluid mechanics.’ Most people probably associate the term ‘fluid’ with water and air. Most of the physicists whose research specialism is fluid mechanics actually do focus on liquids and gases, so my field is unusual,” she says. Apparently, very few fluid mechanics researchers specialize in highly viscous solid earth.

Associate Professor Namiki says that the 2000 eruptions of Mount Usu and Miyakejima triggered her interest in volcano research. We asked the associate professor how she studies volcanoes. It turns out that her method is unique. She uses familiar substances like starch syrup and toy slime to test how magma flows and how volcanic ash changes. “Starch syrup flows in a similar way to magma, you know. Another major reason for using it is that you can easily adjust its viscosity,” says the associate professor. The thickness of the real magma varies: basaltic magma is smooth and free-flowing, while rhyolitic magma is thick and syrupy, so she alters the quantity of water to adjust the viscosity.

It is not only the way in which starch syrup flows that has an influence on understanding of the mechanism causing magma to rise up; its “stiffness” does, too. Associate Professor Namiki places the starch syrup in a device called a viscometer, which twists the sample from the top to measure the solidity of the starch syrup. “We measure the force required to twist the syrup with this device and the degree to which it can be twisted. Thinner fluids can be twisted a lot with only a small amount of force; conversely, thicker fluids cannot be twisted, even when a strong force is applied,” she explains.

Through this process of experimentation, measurement, and analysis, she is trying to explain the mechanism of volcanic eruption in terms of why and how eruptions occur. 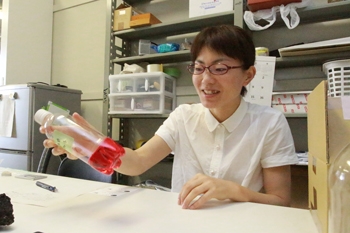 Associate Professor Namiki holds a bottle of the starch syrup used in her experiments.

Sloshing is the phenomenon in which liquid inside a container moves around a great deal when the container is subject to vibration. It was something that she happened to see on television that led Associate Professor Namiki to link sloshing with volcanoes. “There was a news item about petroleum tanks having been destroyed because sloshing occurred in the tanks after an earthquake, causing the petroleum to leak out and the lids to break. When I saw that, I suddenly wondered, ‘What if sloshing also occurs in the magma reservoirs under volcanoes?’”

Sloshing cannot occur without a space above the liquid. Given that magma reservoirs are located deep underground, the magma should fill all cavities, without leaving any spaces. So why, despite this, did Associate Professor Namiki think that sloshing might occur in magma reservoirs as well? “I’d previously conducted research into the way in which bubbles in magma collapse before an explosive eruption. That experience led me to conclude that if there were bubbles at the top of a magma reservoir and those bubbles collapsed, a space would appear,” she says. Then, hypothesizing that tremors cause bubbles to collapse, she conducted vibration experiments with starch syrup standing in for magma and proved quite brilliantly that her hypothesis was correct. In the vibration experiments, even when there was no spaces at the top of the container, bubbles disappeared because of the vibration and the resulting space enabled sloshing to occur. Associate Professor Namiki became the first person in the world to demonstrate the possibility that sloshing could occur in a magma reservoir.

A step forward in unraveling the link between earthquakes and volcanoes

There are a number of possible triggers of volcanic eruptions and it is thought that the formation of foam in a magma reservoir or the mixing of magma of different temperatures could activate a volcanic eruption.

These vibration experiments confirmed that tremors cause bubble collapse, but what happens when this occurs inside a magma reservoir? As well as the possibility of sloshing, of course, foaming is also predicted. This is because gas is released when the bubbles collapse, lowering the pressure of the magma reservoir and causing the gas that had been diffused in the magma to form bubbles of gas. The vibration experiments using starch syrup also enabled the associate professor to verify that sloshing causes starch syrups of differing viscosities to mix. This explains why sloshing makes a volcanic eruption more likely.

Associate Professor Namiki demonstrated for the first time that tremors have the potential to activate an eruption, providing a promising lead for efforts to unravel the link between earthquakes and volcanic eruptions.

Few researchers specialize in solid earth geophysics and even fewer adopt Associate Professor Namiki’s experimental approach, making her task that much more difficult, because “there are no established experimental methods or procedures.” Laughing a little ruefully, she explains, “I often have to make the equipment myself because nobody manufactures it, but perhaps because it’s home-made, it sometimes breaks down and things hardly ever go completely according to plan.” She continues, with a smile, “But that does mean that I’m even happier and it feels even more rewarding when an experiment goes well or when I’m able to get useful data.” Describing the pleasure she derives from her research, Associate Professor Namiki says, “Of course, it’s great when the data lines up with my expectations, but it’s really interesting when I make new discoveries, even if the data differs from what I’d expected.” 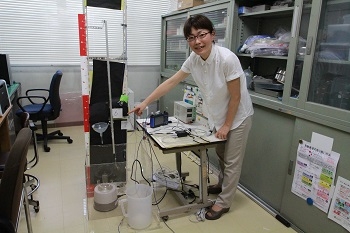 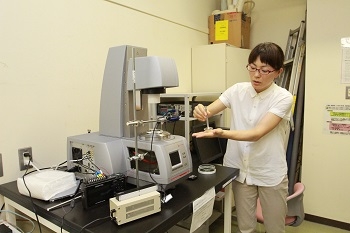 Associate Professor Namiki explains how the solidity of starch syrup is measured.

Cherishing links with others

“Research isn’t something accomplished through your own efforts alone; you need the help of those around you.” As well as making test equipment herself, she often asks the university’s Innovation Plaza to manufacture things for her. “I wouldn’t have been able to carry out the vibration experiments to study sloshing without the help of Eleonora Rivalta and colleagues in the GFZ German Research Centre for Geosciences in Potsdam, Germany. I’m also involved in a joint research project with the University of California, Berkeley on the El Tatio geysers in Chile; thanks to the University of California researchers, who contacted local people and made arrangements, I was able to go there to conduct fieldworks. Even within Japan, I work with other researchers and undertake joint research,” says Associate Professor Namiki, explaining the importance of links between researchers.

This summer, Associate Professor Namiki is going back to the GFZ German Research Centre for Geosciences in Potsdam to conduct experiments to demonstrate how magma rises. She is also taking on the challenge of measuring the stiffness of igneous rock and photographing the inside of fumaroles, something that nobody has ever managed before.

As well as researching volcanoes, she is apparently discussing a joint research project focused on earthquakes with Professor Ikuo Katayama of HU’s Graduate School of Science. “I have classes to teach, so it’s not easy to find enough time for research, but I do enjoy working on research projects with like-minded colleagues,” she remarks with a smile. “I love physics and I want to use it to explain the earth’s phenomena,” she says, affirming her intention to continue her work with the same readiness to take on a challenge that led her into this field of research in the first place. 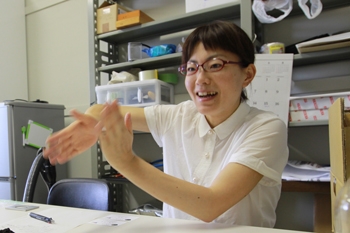 Associate Professor Namiki talks about the prospects for future research.

In her research, Associate Professor Namiki’s motto is “Doing something different from everyone else.” I was impressed by her energy and willingness to take on the challenge of conducting experiments that nobody else had ever tried. Actually touching different types of igneous rock, watching the way in which starch syrup flows, and seeing the equipment that Associate Professor Namiki had creatively devised for her experiments, I became utterly fascinated by the world of volcano research. Japan is a country that frequently experiences earthquakes and has many volcanic eruptions. I became keenly aware of the necessity and importance of research, as many aspects of the link between earthquakes and volcanoes are not yet understood. I hope that Associate Professor Namiki’s research will progress further and that she will be able to unravel the mechanisms that trigger volcanic eruptions and earthquakes! (F)