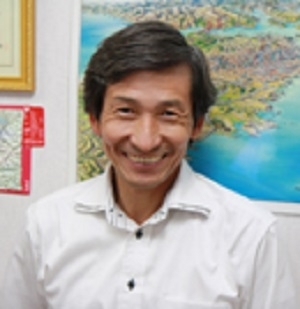 In this edition of Research NOW, we interviewed Professor Tsutomu Masujima of Programs for Biomedical Research, The Graduate School of Biomedical Sciences.

(2008 September 30th, Interviewed by the Public Relations Group, Office of the President)

Through this new method of analysis, the professor made it possible to view the movements of a single cell, not even 1 pl (*3) in volume, and to directly analyze the thousands of types of molecules that lurk inside the cell at the exact moment that a change occurs, enabling a faster and more precise method of pinpointing exactly what those moving molecules are. This new method has been praised as something which will contribute greatly to the acceleration of life sciences and medicine, and in September of this year, was awarded the 2008 Japan Society for Analytical Chemistry Award.

(*1) The method, "Live Single-Cell Mass Spectrometry" was named by the editor of Nature magazine. Technique for analyzing both the movement and material of a single, living cell at the same time.
(*2) Identifying precisely what a molecule is based on its weight; made famous by 2002 Nobel Prize Winner Mr. Koichi Tanaka of Shimadzu Corporation.
(*3) 1 pico-liter = 10(-12) liter

When materials absorb light, heat is produced. When heat is produced, it causes air to expand and make a sound. In the 1980s, the professor conduced research in "Photoacoustic Micro-spectroscopy" whereby he gathered those sounds using a microscope rigged with a microphone, and then turned the sounds into signals for analysis. While researchers at the time were proceeding with analysis using lasers, Professor Masujima discovered that it was possible to perform analysis using X-rays at a synchrotron facility in Tsukuba (1985). "After applying the x-ray, everyone got really excited when they were able to confirm the signal with their own eyes. It was then that I thought that if you believe and face things seriously and sincerely, then nature will always give you an answer. The joy I felt then continues to grant me moral support to this very day," says professor Masujima. It was a pioneer discovery. 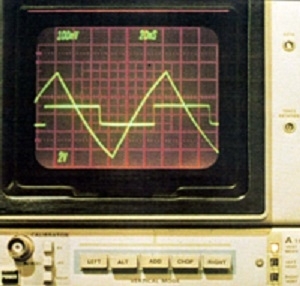 The signal when X-ray photoacoustic effect was discovered.

The detector which was used at the time of his discovery was actually built from scratch by professor. He states that it is precisely because it was a product created after many trials and errors that it enabled him to "create equipment with excellent sensitivity at that time". Building and creating things is a hobby of Professor Masujima, and in the workshop located in front of his office, the professor continues to build devices for his research even today. 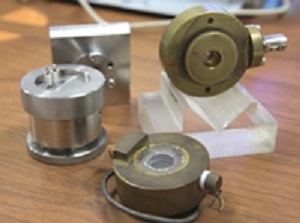 After discovering the x-ray photoacoustic effect, the professor's efforts sifted toward "visualizing analysis methods". This method uses a video camera to view the "movement" of materials as they react, something which previously could only be "seen" through graphs. Then, in 1996 with the efforts of the assistant professors on his team, they succeeded in making the allergic reaction of a cell visual for the first time in history. This discovery had a deep impact on many researchers. 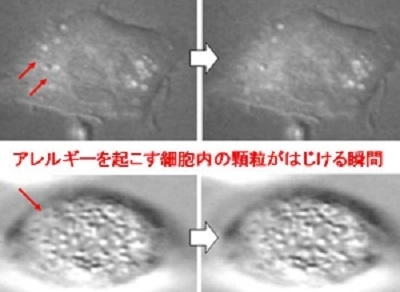 The allergic reaction of a live cell (popping of micro-granules).

Each Cell Has Its Own Personality.

Taking a closer look at the captured footage of the cell's reaction, another discovery became clear to the professor.

When the video footage of the cells within the microscope's field of vision was turned into a two-dimensional image, he realized that despite the cells being under the same conditions, "there were differences in the moment they burst (reacted) and in their movements."

"Each cell has its own personality." It was this thought that caused the professor to consider the following: "I want to capture the cellular and molecular changes of a single living cell in real-time. The sooner the molecular mechanisms of cellular change can be known, then the sooner the discovery of the causes of disease and the development of diagnostics and new medicines will occur."

The image on the left shows cells popping, while the image on the right displays the differences in time and numbers of popped granules from cell to cell.

The Fusion of Handmade Nano-Tips and Cutting-Edge Equipment

Professor Masujima's pioneer research was realized through the fusion of his own handmade tools and cutting-edge equipment. The "Nanospray Tip" for mass spectrometry (MS) developed by HUMANIX, a university venture company established by the professor, has a tip which is 1 micrometer top-bore(*) in size and able to siphon ultratrace liquids inside of cells. This led to the discovery that it is possible to comprehensively detect the molecules within a single cell (nano-MS analysis). With the cooperation of the manufacturer, the professor was able to purchase the Orbitrap mass spectrometer, which through the results of precise measurements allows for the swift determination of a molecule's identity. This method shortens the otherwise week-long process of identifying molecules inside of a cell to 3 hours at shortest. 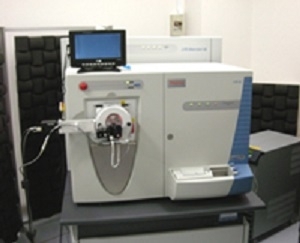 When it comes to students, "I want them to follow their dreams," says Professor Masujima. The professor himself is always chasing after his dreams. His field of research includes far more than just Life Sciences. One example would be the leading development of a "Low Cost Retractable Dome (patented)" (for the citizens of Hiroshima) with 4 domestic companies for the new baseball stadium (currently under construction) which will replace the Hiroshima Municipal Baseball Stadium. In answer to the question, "Why is a professor of analytical chemistry building a dome?", the professor had this to say: "My self-styled approach of developing new devices for realizing new methods fundamentally doesn't change. I'm from the field of physics -- whether it's analytical instruments or a dome, new ideas will come up by spinning its physical principles." His words left me overwhelmed with his flexibility of thinking and his ability to make his dreams a reality. 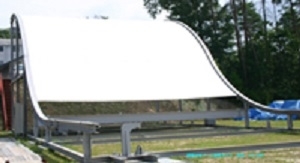 Professor Masujima constantly tells his students to "look to the heart of things". "I don't want to educate them as operators. I am continually saying to them that thinking about the 'why' of why certain data came up, or in being able to say 'to put it simply, XYZ' when explaining something to others. These cannot be done without grasping the heart of or the essence of things," says the professor.

"I want to continue to cultivate students who can think about the heart of thing, and who will take on challenges. But lately students who are 'deviants' (in a good way) are hard to come by, which leaves me feeling a little disappointed." It's my feeling that students will grow by watching the professor as he confidently performs his research. 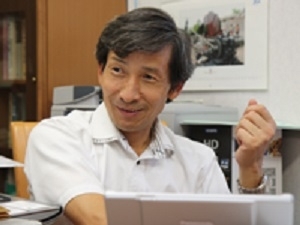 "Look at the heart of things."

Before I had the opportunity to interview Professor Masujima, I had a very laidback and cool image of him. However as I got further into the interview, that image changed completely.

"It isn't my job to do what others are doing. I want to do what others can't do." It is with that strong determination that the professor makes continuous efforts to fulfill his dreams everyday. In September of this year, the "World Cellomics Center" was established in the Kasumi Campus of Hiroshima University to take the lead globally in rapid and direct molecule analysis of a live single cell, and Professor Masujima was inaugurated as Director of this leading-edge Center.

In his spare time, the professor enjoys such pastimes as creating Japanese-style paintings. One can only admire such a professor who is active in both his professional and personal life! When I imagine where the professor's interests and endeavors will lead to, even I can't help getting a little excited. (M) 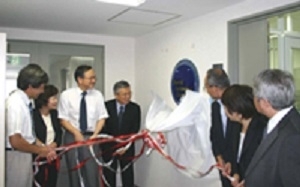