Use of genetically modified organisms (GMOs) - microorganisms not found in the natural world but developed in labs for their beneficial characteristics - is a contentious issue.

For while GMOs could greatly improve society in numerous ways - e.g. attacking diseased cells, digesting pollution, or increasing food production - their use is heavily restricted by decades-old legislation, for fear of what might happen should they escape into the environment.

For researchers, aware of their potential, it is important to develop safety strategies to convince legislators they are safe for release. 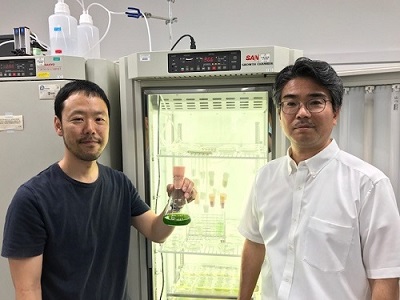 Biocontainment strategies - methods used to prevent GMO escape or proliferation beyond their required use, typically employ one of two forms.

One is "suicide switch" where released GMOs die off independently after a given time. The other is "nutrient requirement", where GMOs are designed to expire on removal of a nutrient source.

The control method for the new genetically modified E. coli strain of bacteria employs the latter, and its simple practicality could prove a real game changer.

It relies on the fact that all living things require phosphorous for a vast array of life-determining processes including energy storage, DNA production, and cell signal-transduction. The overwhelming majority of bacteria, source phosphorous from the naturally occurring nutrient phosphate.

However, bacteria are renowned for their ability to obtain energy from seemingly implausible sources and the researchers at HU found one type, Ralstonia sp. Strain 4506, capable of utilizing non-naturally occurring phosphite instead - throwing up exciting possibilities.

As Phosphite, a waste by-product from the metal plating industry, does not occur in the natural world, scientists can easily control its availability and determine potential GMO proliferation.

Strain 4506's phosphite-digesting enzyme was thus isolated and introduced into E. coli bacteria, which due to its versatility is considered the poster boy of the GMO world. Genetic editing also saw a phosphite specific "transporter" created to allow this nutrients intake.

As E. coli has seven phosphate transporters - pumps for transferring phosphate from outside the cells membrane to inside, Professors Hirota and Kuroda set about shutting them down using genetic editing.

When the resulting GMO was tested the results were outstanding. It proliferated in a phosphite medium, and didn't grow at all when exposed only to phosphate.

Further, when thriving populations were later deprived of their phosphite-hit, their numbers tumbled over a two week period to zero - thus fulfilling the criteria for "nutrition requirement" biocontainment.

However, what the scientists discovered next astounded them. Even when this new GMO was successfully and continuously cultured on phosphite, its population nevertheless still began plummeting after two weeks.

Baffled, the HU researchers are investigating but there is a possibility that this strategy possesses "suicide switch" characteristics on top of "nutrient requirement".

Whatever the reason, an extremely safe and practical biocontainment strategy has been born. Requiring just nine simple gene edits, in naturally occurring organisms, and based on phosphite - a readily available industrial waste product; it is extremely cost and time effective. Additionally, its simplicity means it can be adapted for other microorganisms, making it highly versatile.

These traits contrast with previous biocontainment strategies involving synthetic organisms and energy sources, requiring hundreds of gene edits, awful lots of money and time, and which are so specialized as to make them impractical.

It is hoped this new strategy will grab the attention of relevant government agencies, and convince them to bring 1980s laws in line with 21st Century advancements. We can then get GMOs safely out of the lab for the betterment of society! 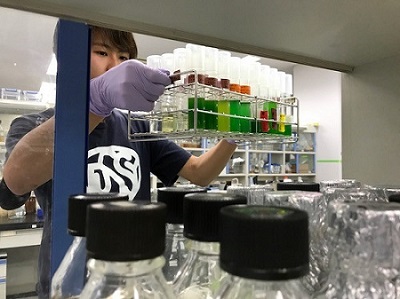 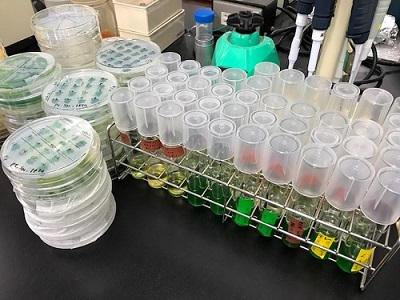 Currently, the HU researchers are working on applying this biocontainment strategy to microalgae; a promising alternative to carbon-dioxide mitigation, as part of the Advanced Low Carbon Technology Research and Development Program supported by the Japan Science and Technology Agency (JST-ALCA).

Phosphite-digesting enzyme was introduced and phosphite specific "transporter" was created.
The seven innate phosphate transporters were then shut down using genetic editing.