Japanese team for follow-up observation of gravitational wave events, J-GEM (PI: Prof. Michitoshi Yoshida, Director of Subaru Telescope, National Astronomical Observatory of Japan=NAOJ), consisting of members from Hiroshima University, NAOJ, Konan University, Kagoshima University, University of Tokyo, and so on, performed astronomical observations for GW170817, which was detected by the gravitational wave (GW) telescopes, Advanced LIGO (USA) and Advanced Virgo (Europe), and successfully detected the optical counterpart of it and followed the daily variation of optical and near-infrared (NIR) lights from it.

After the first successful direct observation of GW in 2015, four (or five) GW events have been detected in total. They are all consistent with the theoretical predictions for collisions of black hole binaries, and no electromagnetic waves including optical light have not ever been detected for them. GW170817 is expected to be optically bright because the properties of the detected gravitational wave is consistent with the collision of neutron stars. Unfortunately the GW170817 is in southern celestial hemisphere and near the sun (thus, it sank below the horizon during the evening twilight), it was severe to observe it from main land of Japan. But, we successfully observed it (Fig. 1) with Japanese telescopes at South Africa, New Zealand and Hawaii, USA.

The observed properties of optical and NIR emissions are consistent with the theoretical predictions for electromagnetic wave emission from `Kilo nova’ in which two neutron stars collides after close binary phase. From this study, a considerable amount of precious metal elements like gold and platina are likely originated from past collisions of neutron stars in the universe.

Besides, the gamma-ray observation with the Fermi satellite (the members in Hiroshima University hold the representative position of Japanese Fermi team) also made a substantial contribution to the GW study, and detailed data analysis of follow-up observation with Fermi LAT is still ongoing. These observational facts ensure that a direct detection of GW is a decisive probe for the `unseen universe’ and that the age of GW astronomy has really begun. 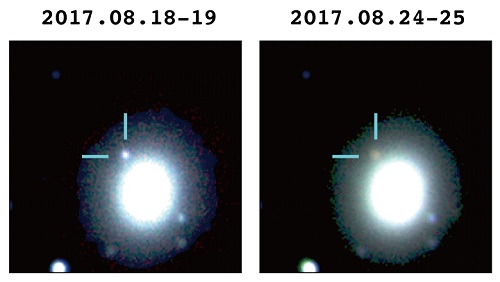 Pseudo-color images of GW170817 obtained by J-GEM observations. Each of the two images consists of an optical image in z band (center wavelength is 0.9 micron) obtained with Subaru/HSC and those in J- (1.2 micron) and Ks- (2.2 micron) obtained with IRSF at South Africa. The star indicated by two cyan lines is GW170817. The nearby large elliptical object is  its host galaxy NGC 4993. GW170817 rapidly becomes fainter and redder.
(Credit: NAOJ/Nagoya Univ.)