On 28th November 2017, prior to the Japan-Mexico Rectors Summit scheduled on 30th November and 1st December, Ambassador García-López Laoeza, Executive Director of AMEXCID and His Excellency Mr. Carlos Almada López, the Ambassador of Mexico to Japan, both visited Kasumi campus of Hiroshima University where they paid a courtesy visit to President Mitsuo Ochi.

Upon their arrival, President Ochi greeted them with the following message: “I would like to give great condolences to the victims of the 2017 Central Mexico Earthquake in September. At the time of the Great East Japan Earthquake in 2011, Japan received great support from Mexico. At that time, Hiroshima University also dispatched more than 1,200 medical staff to Fukushima. I hope both Mexico and Japan can share the experience gained from reconstruction process out of each disaster, and will devote themselves in full towards creating safe and secure society.” The raised total sum of about 750,000 yen collected from the faculty & administrative members and the students at Hiroshima University, has been donated to Mexico through the Mexican Red Cross.

The Executive Director García-López thanked in return by saying, “I would like to express my great respect to Hiroshima University’s marvelous recovery from the atomic bomb disaster and for dispatching medical specialists to Fukushima. We are deeply grateful to Japan for devoting herself to relief activities for the 2017 Central Mexico earthquake.” 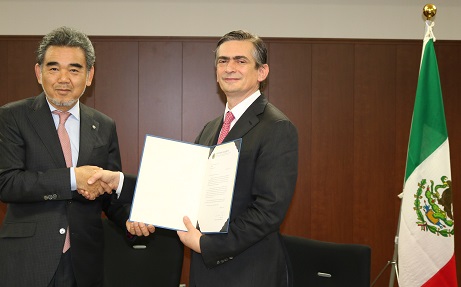 E-mail: koho*office.hiroshima-u.ac.jp (Please replace an asterisk (“*”) with @ at the time of sending an e-mail)