The contest began with opening addresses by Mr. Shigehiro Komaru (Executive Director of the Komaru Transportation Foundation and President of the Fukuyama Transporting Co. Ltd.), Dr. Aurelijus Zykas (Head of the Centre for Asian Studies of VMU) and HU President Mitsuo Ochi. Following that, 6 participants presented their speeches.

After the award ceremony, Ambassador Extraordinary and Plenipotentiary of Japan to Lithuania, Mr. Shiro Yamasaki, gave a speech in which he endorsed the event for promoting friendship between Japan and Lithuania, and fostering human resources who will encourage greater communication and collaboration between the two countries. The contest concluded with the closing remark from Prof. Toshiyuki Sato, Executive and Vice President of HU. The audience listened intently until the very end of the contest. 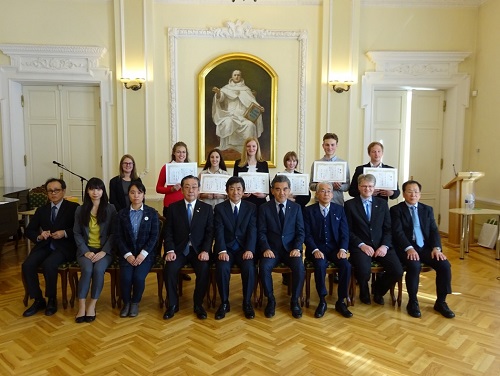 Hosts, guests and participants of the speech contest