This association consists of former international students and researchers of Hiroshima University (HU) currently active in Taiwan. It was established in February 2009 with regular meetings taking place over the years. In this meeting, a total of 30 people gathered and participated including Associate Professor Saori Sakamoto from Fu Jen Catholic University (Chairperson of this association) and other HU alumni presently working at universities or other institutes of higher education in Taiwan. From HU, President Mitsuo Ochi, Executive and Vice President (International/Peace/Fund) Toshiyuki Sato and Vice Executive (Japanese-Language Education) Kumiko Sakoda also participated.

During the meeting, they renewed old friendships, engaging in various conversations including; the increasing activity in international exchange with Taiwan, the old days at HU, and news of their former teachers. Not only that, in addition to singing the Hiroshima University Song together, the participants enjoyed the dance performance and the magic shown by some groups of participants, and the meeting was a resounding success.

HU established overseas alumni associations in order to create a network among alumni abroad. Meetings are held periodically, and we expect to reinforce exchange among alumni, their connection with the University and to strengthen the human network in general. 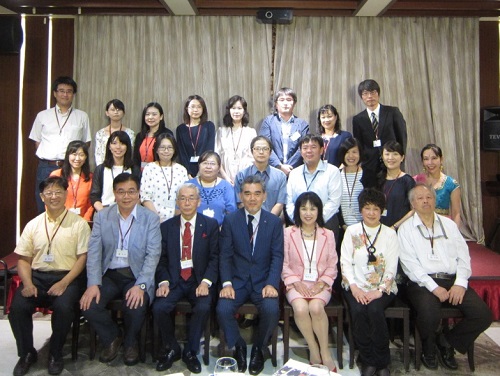 Group photo of the participants