The contest began with opening addresses by Mr. Shigehiro Komaru (Head Director of the Komaru Transportation Foundation and President of the Fukuyama Transporting Co. Ltd.) and Dr. Linas Didvalis (Head of the Centre for Asian Studies of VMU). On top of that, the Japanese Ambassador to Lithuania H. E. Shiro Yamasaki, a special guest of this event, also gave his address. Following that, an exhibition speech was presented in Japanese by Matas Jagelavičius (VDU Rasos Gimnazija), the second place winner of the last year’s contest, about his experience participating in the Japanese Language and Culture Special Program held by Hiroshima University.

In the contest, 12 participants categorized in 3 groups of 4; advanced level, intermediate level, and beginner level, made speeches in Japanese. After careful consideration by 4 judges, the top 2 from each category were awarded certificates and extra prizes.

The contest was concluded with the closing address from Executive Vice President Toshiyuki Sato from Hiroshima University. The audience listened intently until the very end of the contest.

The top 2 winners from the advanced-level group, will participate in the next Japanese Language and Culture Special Program held by Hiroshima University on the invitation of the Komaru Transportation Foundation. 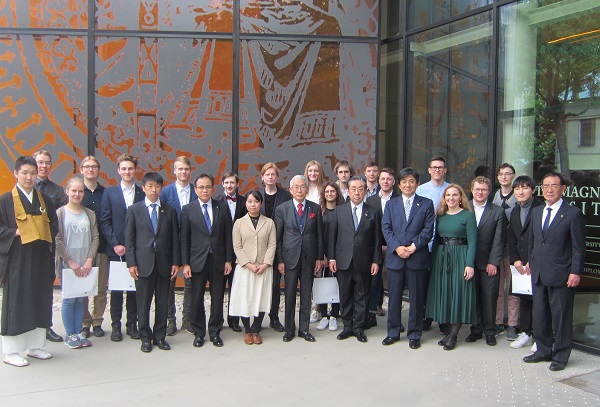 Commemorative photo after the contest