HU has ranked in the 1st place for “Inter-personal Communication Skills and Pressure Resilience Skills” on the brand image ranking of universities in Japan, which is based on the survey results collected from the personnel departments in Japan

The survey was conducted by Nihon Keizai Shimbun and Nikkei Human Resources (a company specialized in recruitment support services), which intended to find out the “University Image Ranking” among the universities in Japan. According to the results, Hiroshima University came to the 1st place for the category of “Inter-personal Communication Skills and Pressure Resilience Skills”. As for the overall scores, Hiroshima University ranked in the 5th place.

According to Nihon Keizai Shimbun (5th June 2019), the survey has been sent to 4779 companies ---most of them are listed companies, but some are unlisted leading companies on the Japanese stock exchange market. The survey asked the respondents to name the top ten universities whose new graduates have been recruited by them between April 2017 and March 2019. The survey also asked the respondents to evaluate the images of the students from those ten universities in the following four categories: “An ability to take actions” “Inter-personal Communication Skills and Pressure Resilience Skills” “Intelligence/Learning Capabilities” and “Originality”. The valid number of responses was 815 out of which the top 166 universities mentioned were entered into the ranking analysis.

In the category rankings for the Student Images, Hiroshima University ranked in the 1st place for the category of “Inter-personal Communication Skills and Pressure Resilience Skills”, whereas it came to the 3rd place for “An ability to take actions”. 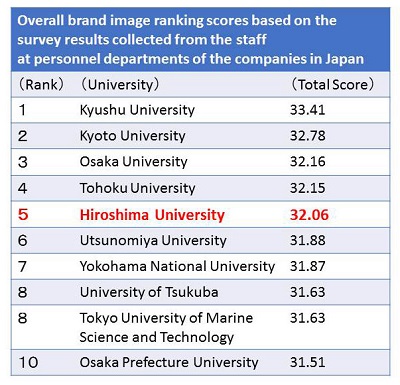