On August 1st 2019, a delegation from the Qinghai Nationalities University (QNU) in China led by Vice President Wang, visited the Higashi-Hiroshima Campus of Hiroshima University (HU) and met with President Ochi and Executive Vice President Sato (in charge of International, Peace and Fund affairs). The meeting was also attended by Professor Nemoto from the Graduate School of Letters.

QNU is a public university located in the city of Xining in Qinghai province and has been promoting exchange mainly with our Graduate School of Letters and Graduate School for International Development and Cooperation. In September 2018, HU and QNU concluded an inter-university exchange agreement.

During the meeting, the both sides exchanged opinions on the history and future prospects of exchange between the two universities. After that, Professor Arami (Deputy Director of the Morito Institute of Global Higher Education), Professor Sato (Graduate School for International Development and Cooperation) and Professor Nemoto (Graduate School of Letters), discussed with the delegation from QNU on expanding student exchange. 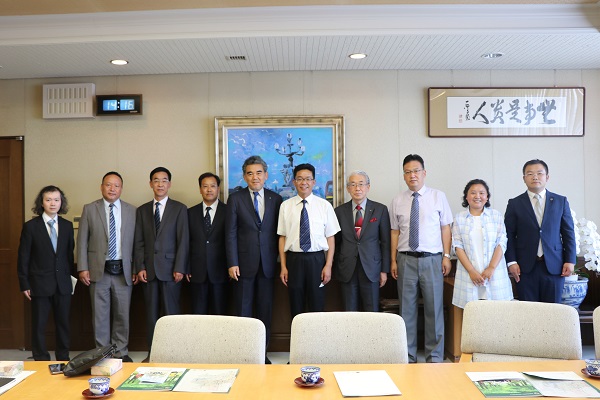