The discovery of bi-allelic mutations in RORC in patients with candidiasis and mycobacteriosis revealed the pivotal role of RORC in mucocutaneous immunity to Candida and in systemic immunity to Mycobacterium in humans.

Inborn errors of human IL-17 immunity underlie chronic mucocutaneous candidiasis (CMC), which is characterized by chronic or recurrent infections of the skin, nails, and oral and genital mucosae by Candida albicans, and inborn errors of human IFN-γ immunity underlie Mendelian susceptibility to mycobacterial disease (MSMD), a rare congenital disorder characterized by susceptibility to infections by poorly virulent intracellular pathogens such as non-tuberculosis Mycobacterium. Five genetic etiologies of CMC and eighteen genetic etiologies of MSMD have been reported so far. Only a few patients were affected by both candidiasis and mycobacteriosis, including some patients with IL-12p40 and IL-12Rβ1 deficiencies that impair IFN-γ immunity and IL-17 immunity.

By an international collaboration study with St. Giles Laboratory of Human Genetics of Infectious Diseases at the Rockefeller University, researchers at Hiroshima University identified bi-allelic mutations in RORC, which encoded RORγ and RORγT, in seven patients from three kindreds of diverse ethnic origins, with an unusual combination of candidiasis and mycobacteriosis. RORγT is a well-known key transcription factor of Th17 cells, which produce IL-17 and IL-22. Therefore, as predicted by the mouse model, the lack of the functional RORγT (and RORγ) protein prevented the development of IL-17-producing T cells, which accounts for the patients’ chronic candidiasis. Consistent with the phenotype of Rorc-/- mice, these patients presented with mild T cell lymphopenia, small thymus, lack of palpable axillary and cervical lymph nodes, and absence of MAIT and type 1 NKT cells.

Severe infection episodes associated with mycobacteria were observed in patients with an unexpected phenotype compared to that observed in previous studies on Rorc-/- mice. To explain this unexpected phenotype, researchers focused on IFN-γ immunity and identified pathological mechanisms underlying host susceptibility to mycobacteria. Leukocytes from RORC-/- patients showed impaired IFN-γ production in response to a mycobacterial challenge, and this defect is attributable to the functional impairment of γδT cells, CD4+CCR6+CXCR3+ αβ Th1* cells, or both. These findings also suggested that IFN-γ treatment may be beneficial for RORC-/- patients. Moreover, this phenotype does not seem to be human-specific, as the researchers also found that mice deficient in Rorc were susceptible to mycobacterial infection.

“We expected these patients to be susceptible to candidiasis, but their susceptibility to mycobacterial disease was unanticipated” said Dr. Satoshi Okada at Hiroshima University and Professor Jean-Laurent Casanova at The Rockefeller University. They finally discovered that human RORC is essential not only for the development of IL-17-producing T cells against Candida but also for the activation of IFN-γ-producing T cells and for systemic protection against Mycobacterium. 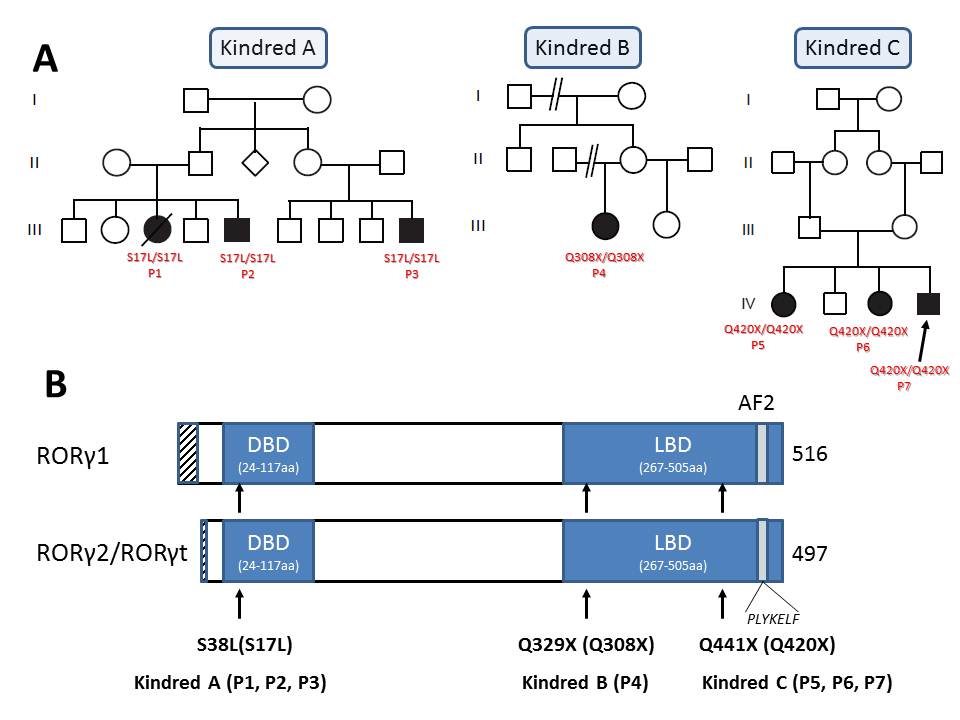 (B) Graphical representation of the RORγ and RORγT proteins, encoded by RORC. Arrows indicate the location of the sites affected by the RORC mutations found in the families investigated in this study.

Title: Impairment of immunity to Candida and Mycobacterium in humans with bi-allelic RORC mutations