A new species in “WoRMS top-ten marine species of 2019”

A new species of squid discovered by Gustavo Sanchez and collaborators was featured in WoRMS top-ten marine species of 2019. 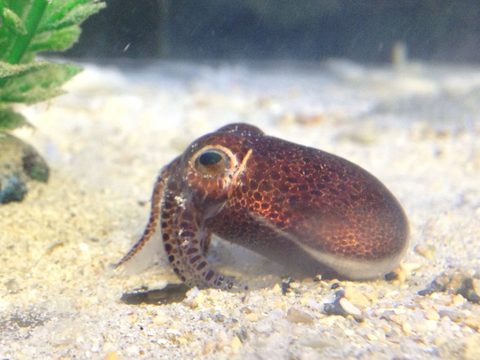 A photo of Euprymna brenneri, taken by Jeff Jolly, a co-author of the study

The result of an international collaboration between Gustavo Sanchez, currently Assistant Professor at HU’s Graduate School of Integrated Sciences for Life and colleagues from the Molecular Genetics Unit at the Okinawa Institute of Science and Technology (OIST) and The Australian Museum, was the discovery of a new species of bobtail squid inhabiting Japan’s Ryukyu archipelago, officially named Euprymna brenneri.

The researchers’ findings were published in Communications Biology in December 2019, in a paper that highlights the Ryukyu islands’ rich biodiversity and sheds light on the complex genetic and morphological structures of cephalopods.

Euprymna brenneri has recently been selected as one of the “Ten remarkable new marine species from 2019”, a list released by the World Register of Marine Species (WoRMS).