What's the future of peace in a post-coronavirus world? Hiroshima University holds its first student summit to tackle this question 75 years since the atomic bomb attack. 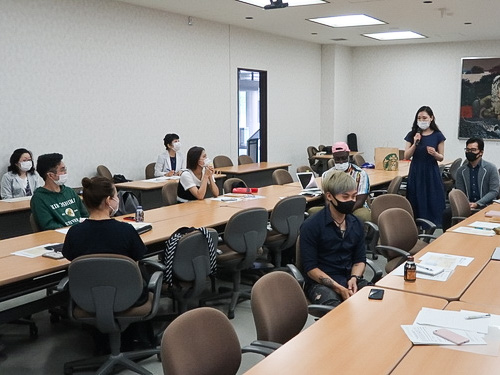 Students are wearing face masks and observing social distancing protocols as they discuss during one of the events of the “2020 Students’ HIROSHIMA Summit to Think about Peace.” Seventy-five years since the atomic bomb attack on Aug. 6, 1945, Hiroshima University holds its first student summit to tackle the future of peace in a post-coronavirus era. A majority of the summit’s events are held online as part of the measures to reduce the spread of COVID-19.

Hiroshima University holds its first student summit to envision a post-pandemic future without conflicts as the world marks the 75th anniversary of both the atomic bombing and the founding of the United Nations this year — influential events in advancing global peace now potentially threatened by COVID-19.

The summit is called the “2020 Students’ HIROSHIMA Summit to Think about Peace.”

In a speech last April, UN Secretary-General António Guterres cautioned against the ways the pandemic could imperil global peace and security. Although, primarily a health crisis, the UN chief recognized the pandemic’s far-reaching implications which could potentially spark a surge in social unrest and violence.

Already, the pandemic has exacerbated existing human rights challenges and created new ones.

“We are seeing stigma, hate speech, and white supremacists and other extremists seeking to exploit the situation,” the UN chief said.

Hiroshima prefecture’s unique history as witness to the horrors of the first atomic bomb attack on Aug. 6, 1945, paved the way to its enduring motivation to remind the world to renounce war and nuclear weapons. The pursuit of peace is also one of the core guiding principles of Hiroshima University, which saw buildings of colleges that later became part of it destroyed in the atomic bombing.

The university emphasized that the objective of the summit is to have students look squarely at tragedies such as atomic bombings, genocides, abuse of prisoners of war, or famine then derive lessons from them as they imagine a future without nuclear weapons and violence.

Twelve undergraduate and graduate students from six countries — Bulgaria, France, Japan, Philippines, Thailand, and United States — were selected by the university last month among those who wrote an essay on “The role of HIROSHIMA in the world of the post-novel coronavirus era.”

The selected candidates are now participating in the summit’s events which involve intensive discussions and a lecture series facilitated by the university’s Center for Peace. The students also had a chance to listen to the experiences of Dr. Kensuke Ueki, professor emeritus of Hiroshima University, who survived the atomic bombing.

A majority of the events during the three-months-long summit are held virtually while on-site discussions observed strict mask-wearing and social distancing protocols to halt the spread of COVID-19.

The summit culminates with the crafting of a 2020 students’ HIROSHIMA declaration, a set of principles to promote nuclear disarmament, in English and Japanese which will be handed to the university president on August 6.