A new technique allowed researchers to observe in greater detail how heat alters keratin proteins, helping in their search for ingredients that can prevent heat-damaged hair. 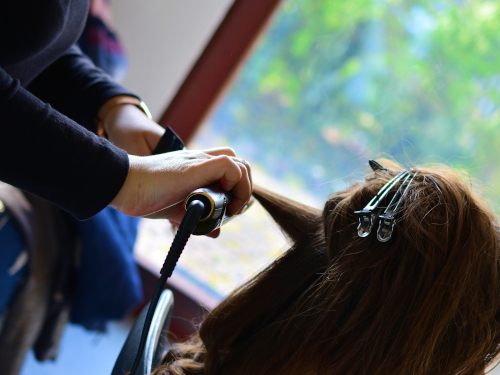 Researchers have observed in greater detail how heat changes keratin proteins that result in hair damage.

Curling wands and flat irons could fry the keratin proteins that make up about 85% of our hair, turning it dry and brittle over time.

When heated, keratin proteins aggregate and suspend in a solution, much like the hardening of raw eggs when boiled. Circular dichroism spectroscopy used in experiments to observe keratin structure allows light to pass through the solution for measurement. But it can only work when keratin is solubilized and transparent.

Getting an up-close look at the gradual structural changes that heated keratin proteins undergo is a challenge to detect once the proteins are thermally aggregated and suspended in the solution.

But researchers at Milbon Co., Ltd. and Hiroshima University’s Hiroshima Synchrotron Radiation Center (HiSOR) developed an experimental technique sensitive enough to allow direct observation of the protein’s aggregation process. They used vacuum-ultraviolet synchrotron-radiation — which provided enough illumination to analyze the structure of aggregated keratin proteins — and optimized the positioning of optical elements to prevent the light from scattering.

“This study showed that the synchrotron-radiation-based experimental technique could clearly monitor the alternations of structural components of the keratin protein under the conditions of heat damage, which is difficult by other methods,” Associate Professor Koichi Matsuo of HiSOR said.

Before this, he explained that they could only see how the proteins look before they were heated and after thermal aggregation — not the process as it happens.

The progressive information on the protein’s structural changes will help their search for active ingredients that can suppress heat damage in hair.

“Based on this research, we can develop new haircare products capable of curing or suppressing hair damage due to the heat treatment,” Matsuo said.

“By monitoring protein’s structural changes, we could rapidly and accurately judge which ingredients can effectively inhibit the structural change of keratin proteins from various candidates of compounds,” he explained, adding that they could also get data such as the heatproof temperature for each active ingredient.

The researchers hope their technique could also prove useful in studying other biological phenomena involving protein suspension or aggregation, such as Alzheimer’s disease.

“Our technique enables us to analyze the protein structures under various conditions, including physiological ones. The technique would also be useful for elucidating the structural alternation of other suspended or aggregated proteins such as amyloid fibrils and membrane-bound proteins, which is the cause of Alzheimer’s disease,” he said.

They presented some of their research findings during the 20th annual meeting of the Protein Science Society of Japan held last year.