A nanosatellite that Hiroshima University researchers co-developed detected gamma-ray bursts in August, months after it was sent to space to monitor these extremely energetic explosions. 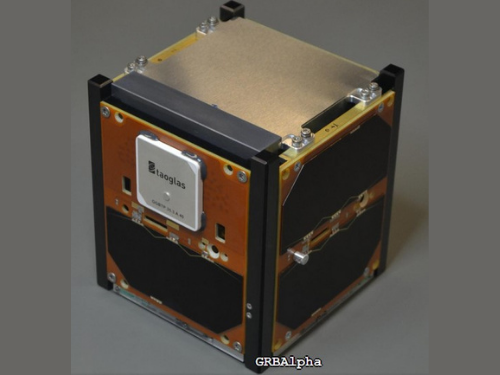 The GRBAlpha nanosatellite measures 10 cm on each side. It carries a 75 × 75 × 5 mm CsI (Tl) scintillator, read out by a dual-channel multi-pixel photon counter (MPPC) setup, to detect gamma-ray bursts.

A nanosatellite that Hiroshima University researchers helped develop detected gamma-ray bursts less than five months since it was launched into space.

The GRBAlpha nanosatellite detected the gamma-ray bursts on August 7. It was sent into space to monitor these extremely energetic explosions hundreds of times brighter than a supernova last March.

“This detection demonstrates that our detector onboard the CubeSat is working with our expected performance,” astronomer and HU Professor Yasushi Fukazawa, who is part of the project, said.

The GRBAlpha is a 1U CubeSat developed and manufactured by an international research team comprised of HU, Hungary’s Konkoly Observatory, Eötvös University, Nagoya University, Masaryk University, and space technology firms Spacemanic and Needronix.

It is the first of the eight nanosatellites to be dispatched to space for the CubeSats Applied for Measuring and Localising Transients (CAMELOT) mission to perform all-sky monitoring for gamma-ray bursts. They will launch the second nanosatellite in December 2021.

Gamma-ray bursts are the universe’s strongest and brightest explosions generated when extremely dense neutron stars merge in distant galaxies. This extremely violent astrophysical event is believed to result in a black hole or a new supermassive neutron star.

The CAMELOT mission aims to demonstrate the feasibility of timing-based localization, which utilizes the triangulation principle with the gamma-ray photons’ different arrival times. The mission will use its nanosatellite fleet to determine where the gamma-ray burst originated with an accuracy of ∼10′.

The team behind the mission is led by Norbert Werner, a specially appointed associate professor at HU in the past and is now a researcher at the university.

HU Assistant Professor Masanori Ohno, who is currently studying in Hungary, was also deeply involved in the nanosatellite’s manufacture. HU graduate students, meanwhile, played an active role in the development and construction of the satellite-mounted detectors.

Also Read: A behind-the-scenes look at the Hiroshima University Observatory


Inquiries on the story