Genetic and epigenetic profiling of hundreds of hepatoblastoma tumors have revealed many of its secrets, long unknown to those researching and treating what is the most common type of liver tumor in children. 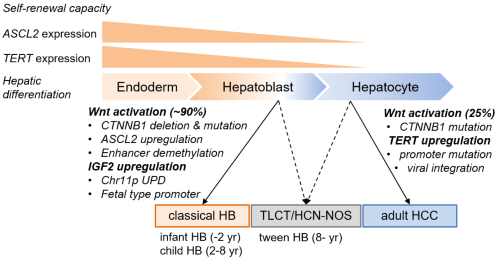 Overview of childhood and adult liver malignancies characterized by molecular aberrations and “cell of origin.”

Researchers at Hiroshima University have analyzed the molecular findings of almost 160 pediatric liver cancer cases and discovered molecular markers that should help to understand and treat the considerable variation in prognoses.

The study appears in the journal Nature Communications on 20 September.

Hepatoblastoma (HB), is the most common liver cancer in children. It presents as a painful, tumorous mass in the abdomen and mainly affects children up to three years old, especially those who have been born prematurely or with very low birth weight.

Surgery to remove the tumor and preoperative chemotherapy prior to such an operation have proved to cure many patients of the illness, but prognoses amongst HB patients also vary widely.

The underlying causes remain unknown and hereditary predisposition and molecular aberrations that lead to these variations in outcomes are not well understood. The term molecular aberration refers to anything unusual about genes that causes alterations in how they are expressed (activated). These can be mutations, duplications of stretches of DNA, or unusual patterns of DNA methylation.

Methylation and de-methylation involve the addition or removal, respectively, of a single carbon and three hydrogen atoms (a methyl group) to molecules throughout the body, working as billions of little on/off switches. In the case of DNA, the methyl groups are added or removed from the cytosine nucleotides along stretches of genes.

Methylation of cytosines is heavily involved in gene expression levels, and it also provides an important epigenetic function—or how your environment and even behaviours can change how your body reads a DNA sequence—that is fundamental to how cells turn themselves into different types for this or that bodily function especially in development process.

In addition, comprehensive genomic analyses of the HB tumor cells (the set of all genetic material in them) have shown that they have some of the fewest genetic mutations of all pediatric solid tumors. This strongly suggested epigenetic changes are contributing to what gives rise to the disease.

“In order to improve outcomes of HB patients, we really needed to know what these epigenetic drivers are,” said Eiso Hiyama of Hiroshima University’s Natural Science Center for Basic Research and Development, “and explore what the ‘cell of origin’ is—basically where it all starts.”

So the team performed genomic, epigenomic and methylation profiling of 163 untreated pediatric liver tumors. There were three main parts to the investigation.

First, the researchers identified genetic variations to clarify the genomic drivers of HB and thus the hereditary aspects of cancer predisposition. Second, they profiled the ‘methylome’—the set of all methylation modifications in the genome—in order to uncover the diverse pathways of HB cancer origin. These different pathways were in turn categorized according to their environmental effects and in so doing, the scientists revealed the distinct subtypes of cancer origin that are related to different pathological features, genomic alterations and gene expression. Finally, the team brought together clinical information and all these molecular features to develop a precise stratification of different types of HB patients.

Common to most cases, they found that cancer genesis is driven by a boost in production of the transcription factor ASCL2 and the selective methylation patterns of Insulin-Like Growth Factor 2 (ILGF2).

Transcription factors control the rate of transcription of genetic information from DNA to messenger RNA (the chain of molecules that plays an intermediary role in genetic activity. Messenger RNA reads and replicates the DNA recipe in a form that can then go on to ‘translate’ the recipe into the various types of proteins that make up most parts of the body. The ASCL2 transcription factor in particular plays an essential role in this process in the cells that turn into tissue in the very area of the body where HB cancers appear.

IGF2, meanwhile, is believed to stimulate the growth of tissues and differentiation of cells in children.

The methylation profiling also revealed that HB cancers are characterized by a decrease in the number of methylated cytosines in enhancer regions. Enhancer regions of genetic code are the sites where transcription factors bind to it—in this case, the regions where ASCL2 binds to the DNA. This results in prolonged extra production of ASCL2. This, together with methylation patterns of IGF2 similar to that of fetal livers, suggests the ‘cell of origin’ is a premature hepatoblast. A hepatoblast is the precursor in the fetus of a hepatocyte, or fully formed liver cell, and it is very similar in various ways to intestinal epithelial cells—the protective cells that line the outer surfaces of organs and which, like cancers, tend to proliferate wildly.

This systematic profiling of HB tumors should now allow for more accurate ranking of risk faced by different patients and of genomic therapies more appropriate to their particular circumstances.