Social scientists have quantitatively explored the links between psycho-social development among youth and their mental health in Ghana and found that emotional, social, and psychological well-being are linked to having healthy relationships with friends, family and community.

The findings were published in the journal Frontiers in Psychology on October 21. 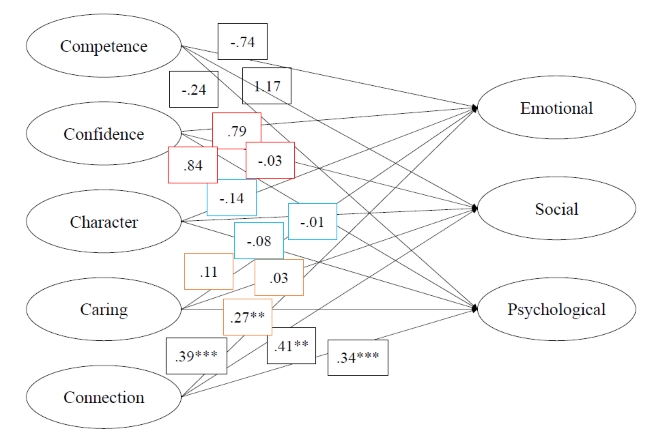 Ghana has a youthful population, with over 55 percent under the age of 25 as of 2018. This makes evidence-based youth policy an essential part of the country’s strategy for economic development, including the relationship between young people’s personal growth and their mental health.

There have been a number of evidence-based programs developed across the continent of Africa that promote positive mental health, but most of these target adults rather than youth. So, the researchers set out to better understand the relationship between what sociological researchers call “Positive Youth Development” (PYD)—a formalized set of developmental indicators—and what psychologists call the mental health continuum (MHC) from languishing to flourishing.

This latter concept, the MHC, describes three axes of measurement: emotional well-being, social well-being, and psychological well-being. Meanwhile PYD is a framework for measuring indicators of thriving for such youthful populations that emphasizes the full horizon of an individual’s talents, capabilities, interests, and future potential rather than, as historically has been the case, only on typically negative aspects such as learning disabilities or substance abuse.

Within the PYD framework, there are a group of developmental constructs known as the 5Cs. (Within the social sciences, ‘constructs’ refer simply to any mental abstractions that humans use to express concepts, so for example, ‘age’, ‘gender’ ‘fatigue’, ‘muscle soreness’, ‘height’ might be constructs used to describe a person). The 5Cs are a widely operationalized conceptualization of the PYD framework, describing developmental outcomes related to Character (having integrity, moral commitment, and respect for societal and cultural rules), Confidence (having a sense of mastery and future, positive identity, and self-efficacy), Connection (having healthy relation to friends, family, school, and community), Caring (showing empathy and sympathy), and Competence (in academic, social, and vocational skills).

The researchers wanted to test whether the 5Cs developmental constructs within the PYD framework could predict positive mental health outcomes.

To do so, they performed a series of psychometric tests gauging both the 5Cs of PYD and MHC factors of 723 Ghanaian youth and young adults, with an average age of 20 and who were attending university in the country. (Psychometric tests attempt an objective measurement of psychological states). The PYD assessment asked whether respondents agreed with a five-point scale with statements such as “I have a lot of friends,” “I really like the way I look,” “I am a useful and important member of my family,” and “It bothers me when bad things happen to any person.” High scores indicated high presence of each of the 5Cs. The MHC test asked participants to respond to a six-point scale describing how often they felt, for example, “happy, interested in life, or satisfied,” that they are “contributing something worthwhile to society and belonging to the community,” and as “having warm and trusting relationships with others.”

The researchers then used structural equation modeling (SEM), a regression-based family of statistical analysis techniques that is used to analyze structural relationships, to examine the relations between the 5Cs of PYD and the MHC factors.

They found that all three types of well-being (emotional, social, and psychological well-being) descriptive of positive mental health were linked to Connection (having healthy relationships to friends, family, school, and community), and one type of well-being (psychological) was linked to Caring (showing empathy and sympathy).

“These results suggest that positive mental health promotion programs such as the Inspired Life Program used in parts of Africa might consider integrating PYD principles for Connection and Caring into their practice involving youthful populations,” said Assistant Professor Russell Sarwar Kabir of the Graduate School of Humanities and Social Sciences at Hiroshima University, one of the researchers involved in the study.

As Ghana has what he describes as a more collectivist culture compared to some Western societies, he hopes to see whether the findings from this African nation can be corroborated with data on youth in Japan, another society he argues has culturally collectivistic tendencies.