For whom? Social scientist tackles why this one question matters in peacebuilding

Hiroshima University Associate Professor Dahlia Simangan talks about her research on peacebuilding, dealing with biases, and the importance of asking, “Who is our research for?” 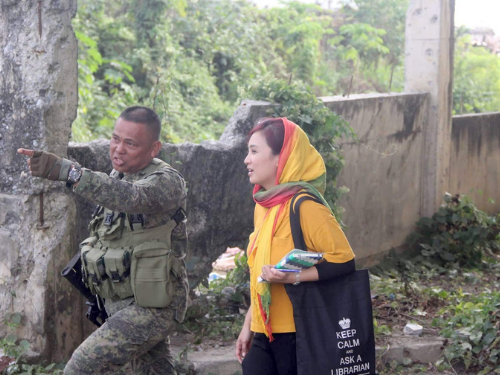 Hiroshima University Associate Professor Dahlia Simangan during fieldwork at the war-torn city of Marawi, Philippines in 2019. Marawi, on the southern island of Mindanao, is undergoing rehabilitation and reconstruction after a months-long siege by IS militants that devastated the city's commercial district in 2017. (Courtesy Dahlia Simangan)

If Hiroshima University Associate Professor Dahlia Simangan has one reminder to others planning to pursue a career as a peace researcher, it is to never forget the importance of asking, “Who is our research for?”

“For those planning to take the same research career, it’s important to be reminded of the question, ‘Who is our research for.’ I hope they do their research always with communities in mind,” she said.

Simangan’s journey in peace research started right after she finished her undergraduate degree of BA Sociology at the University of the Philippines in 2006. She worked for the Philippine government researching the country’s bilateral agreements with militaries of other nations. The experience sparked her curiosity on how states negotiate to achieve common goals despite conflicting interests.

“That’s why after that stint, I did my graduate studies in international relations. But in terms of research topics, my subfield is peace and conflict studies,” she explained.

Simangan’s research explores how to build and sustain peace after an armed conflict. But to reach an answer to this, she said you must go through a bunch of other questions first, such as: who builds peace, where do peacebuilding activities take place, and how to prevent conflict relapse.

In particular, she said she’s interested in the interaction between international and local actors in a post-conflict or conflict-affected society. She said her ultimate goal in her research is to amplify perspectives from the ground.

“It’s a long process and financially costly, peacebuilding is. And if it is not responsive to the needs of the people, it can backfire. So, when conflict relapse happens, that is just wasting the resources and efforts spent for the peacebuilding process,” she said.

“At the end of the day the local communities are the ones who are at the receiving end of these peacebuilding activities so their experiences, their perspectives are what matter.”

Simangan mentioned the importance of engaging local voices in peacebuilding in achieving the objectives of the United Nations Sustainable Development Goal 16. She handles graduate courses on global governance and peacebuilding case studies at the Graduate School of Humanities and Social Sciences.

“I am glad that we are in global conversations about peace and SDG16, especially in Hiroshima University because of the history here,” she said. The pursuit of peace is one of the five guiding principles of HU.

Closing the gap between research and practice

To Simangan, linking research with community service is essential.

“That’s how we contribute, I think, to the broader society outside academia. I think this is also related to what I mentioned about the gap between research and practice.”

And it’s something she used to struggle with after accomplishing her Ph.D. at the Australian National University in 2017. However, that same year, she attended a conference about peace and reconciliation in Nepal that inspired her to start a non-profit organization there called Peace Perspectives.

“Conference delegates, including myself, were deliberating on how to build peace, and we were very comfortable in the fancy hotel where we were staying. All the while, just coincidentally, people in Kathmandu were having a hard time getting food, going to work, or going to school because of a fuel shortage due to the blockade between India and Nepal’s border,” she narrated. 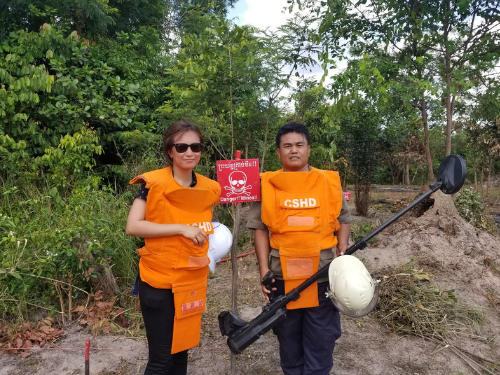 Simangan during fieldwork in 2018 to research demining and transitional justice in Cambodia. (Courtesy Dahlia Simangan)

She explained that instead of finding the answer to achieving lasting peace for the communities, Peace Perspectives asks the everyday people what peace means to them. They then work with them based on those definitions of peace.

Simangan explained that conducting fieldwork to collect data is the most challenging aspect of her work.

“To understand the peacebuilding processes and the issues surrounding it, I have to travel to places that I just read from books and articles. And those places have high security risks because of the history of violence and conflict. So, preparing for fieldwork is both a physical and mental exercise,” she said.

Dealing with biases and getting exposed to trauma while listening to narratives of conflict are occupational challenges for peace researchers. Simangan admitted that it could be challenging to separate your emotions, but it is crucial to maintain your neutrality as a researcher.

She also highlighted that it is vital to verify and triangulate the data.

“I understand that there might be biases and emotionally-driven perspectives, so it is very important for me to verify them and triangulate them. So that takes so much time.”

Although the COVID-19 pandemic has limited her ability to travel to collect data on the ground, she is grateful to be working with local researchers who are more knowledgeable of the issues on the ground.