On December 4th, 2021, the 6th Japanese Essay Speech Contest was held online in Indonesia and Japan.

Since its inaugural event in 2016, this annual contest has been held and co-hosted by PERSADA-HU Collaboration Project Center and the Komaru-Koutsu Foundation with the theme of “Transportation”, in Universitas Darma Persada (UNSADA) in Jakarta, where the aforementioned center is located. But this year (much like last year), the event was held online and broadcast live between the Headquarters of Fukuyama Transporting Co. and HU, with the contestants, special guests and other participants joining from individual locations due to COVID-19. There were 111 applications in total from 10 of HU’s international exchange partner universities, which are all leading institutions in Japanese language education in Indonesia. Out of the 111 applications, 25 were recommended by their universities, and from those, 10 students were selected and presented their essays at the contest.

Then, Japanese Ambassador to Indonesia H.E. Kenji Kanasugi, the special guest of the event offered words of encouragement, not only promoting friendship between Japan and Indonesia, but also the nurturing of individuals who will form a bridge between the two countries.

Following that, the pre-recorded Japanese speeches of the 10 contestants were shown, and the panel of judges asked questions to each contestant after the broadcast of their speech. Then, Specially Appointed Lecturer Daichi Yanamoto of the HU Morito Institute of Global Higher Education, who chaired the panel of judges, gave his critique, followed by the announcement of result. This time, the first prize went to Mr. Christian Putra Riandi from UNSADA.

At the end of the contest, HU Executive Vice President Toshiyuki Sato gave his closing remarks. The participants of approximately 130 people, both in-person and online, listened enthusiastically until the very end. 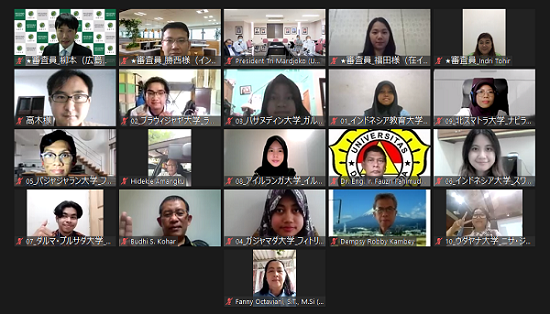 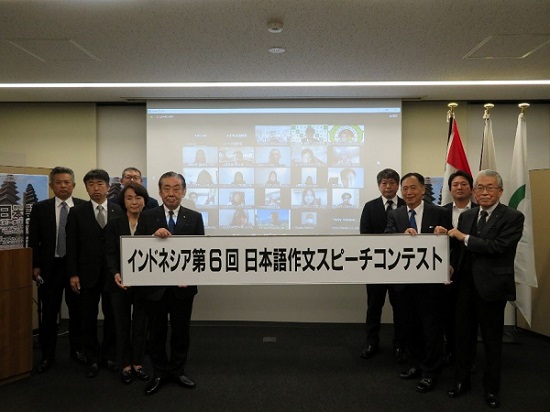 Commemorative photo at the venue in the Headquarters of Fukuyama Transporting Co.