This doctor is leading the ‘e-girls culture’ in Japanese hospitals, but it's not what you think

The ability to see what’s happening inside the body in real-time and at a high resolution is a capability that ultrasound grants orthopedists at a low cost to patients. Ultrasound-guided diagnosis, however, remains relatively new in the field. Dr. Yuko Nakashima is here to change that for Japan with the help of her fellow “e-girls.” 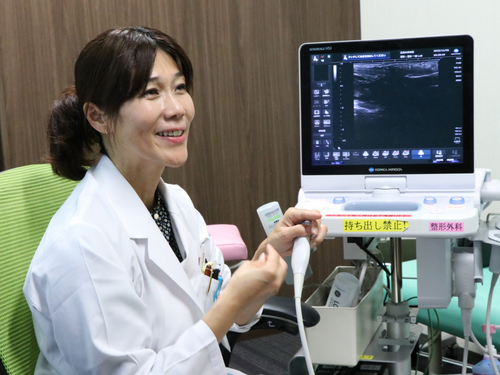 With the help of high-resolution ultrasonography, Dr. Yuko Nakashima and her co-researchers were the first to detect via preoperative imaging cases of hourglass-like fascicular constriction, a condition that causes palsy. Before this, constrictions have only been discovered through surgical exploration. (Hiroshima University)

If you go to Hiroshima University Hospital for a persistent shoulder pain that’s bugging you, chances are you’re going to be checked by orthopedist Dr. Yuko Nakashima, Japan’s leading “e-girl.” Except she’s not an e-girl as you may think. Rather than the electronic girls, a subculture that has gained mainstream popularity thanks to social media, these e-girls doing rounds in hospitals stand for echo girls. It is an allusion to the echoes of high-frequency sound waves that form into images in an ultrasound — their expertise.

Ultrasound gives orthopedists the ability to see underneath the skin in real time and check for musculoskeletal abnormalities in a low-cost and non-invasive manner. Despite this, ultrasound-guided diagnosis remains relatively new in their field. Nakashima is here to change that for Japan. Much like how electronic girls conquered popular culture, Nakashima hopes the echo girls’ influence could soon make ultrasound use widespread in Japanese orthopedics — potentially transforming the culture of care in hospitals into a more exceptional experience for patients.

“For ob-gyn and internal medicine, ultrasounds may be the first choice. But for orthopedic clinics, the general image of diagnostic imaging may be X-rays, CT scans, or MRIs,” she said.

“Although in recent years, with technological advancements, ultrasound also came into use in the field. We can now see what we couldn’t see before in real-time, such as the bone surface and soft tissues like muscles, tendons, ligaments, nerves, and blood vessels.”

Nakashima started her “E-Girls  Project” in 2019 to help fellow female orthopedic surgeons, who comprise 6% of the total number of practicing orthopedists in Japan, build capacity and confidence in ultrasound use. But there was a time she wasn’t comfortable calling herself an orthopedic surgeon.

Out of various orthopedic specialties, she chose to focus on the hands, which involve not only major surgeries but also small operations that wouldn’t require hospitalization. Nakashima figured this could allow her to be in a field where she could continue doing valuable work without taking much time away from her family. But things didn’t go as well as she thought.

“I started my practice when I was 24 years old. So, it's been about 24 years now. But I was kind of away from work when I was raising my kids so I kind of feel like I’m so behind. I’m unable to spend time training for surgery for a long time. That’s why I’m hesitating to say that I’m an orthopedic surgeon,” she said. 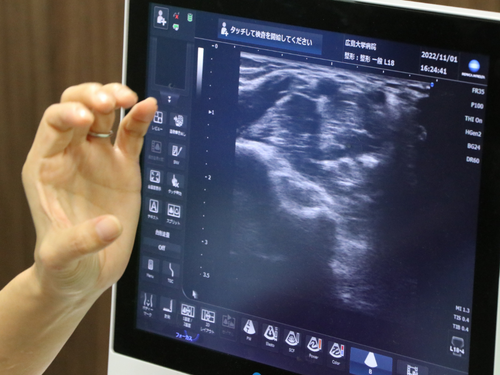 Looking back, what she felt to be a lag in her career turned out to be an opportunity to forge her own path. It was on a day she was wondering what to do next that she stumbled upon an old ultrasound machine in the clinic.

“One day, I found a machine covered with cloth in a storage room in the outpatient clinic. When I opened it, it was an ultrasound machine. The machine worked when I turned it on. I didn’t know who bought it, when, or why but I wondered why it wasn’t being used even though it was usable,” she said.

The mother of three boys, now aged 14, 16, and 19, recalled her excitement in seeing the image reflected on the screen.

“Something just clicked,” she said.

Nakashima immediately realized its potential and started looking for textbooks and seminars on it. She found one seminar in Tokyo and quickly signed up.

“At that time, there was no one around me who was dealing with ultrasound in the orthopedic field, and there was no one who could teach me, so I went to Tokyo and various places to attend seminars. I learned how to see the elbow bone, muscles, tendons, nerves, and stuff.”

“I thought it was exciting. It was fun. So, I decided to continue training, even though it was only me doing it in the hospital. I wanted to do a job where people could rely on me, even if it was just one thing.”

Mastery of something that other people around her weren’t doing was a difficult undertaking, Nakashima said. Nevertheless, she continued to train. And for 13 years now, she has never stopped using ultrasounds.

Her work has since led to advances in orthopedics. In 2014, five years since she started learning about ultrasonography, she and her co-researchers were the first to detect via preoperative imaging the presence of hourglass-like fascicular constriction, a condition that causes palsy, in patients’ hands. They used a high-resolution ultrasound to evaluate telltale signs of the lesion. Before this, constrictions have only been discovered through surgical exploration.

“There might be many doctors who can do hand surgery, but right now there is only me who can do an ultrasound of the hand,” she said, describing how her newfound capability made her feel.

“When I first started doing this ultrasound examination in the outpatient clinic, other doctors were kind of thinking it was weird seeing me. They were thinking, ‘What is she doing? What can she see?’ But step by step, I talked to them about it. So right now, many doctors, even in our department, use ultrasound a lot.”

Seeing the similar passion in fellow e-girls is something that both surprise and delight her.

“The desire to learn seem to flow from their whole body,” she said.

Learning is also the theme of this year’s 33rd Annual Meeting of the Japanese Society of Orthopedic Ultrasonics, which Nakashima chairs, whose attendance reached its highest number ever at 1,600 participants. 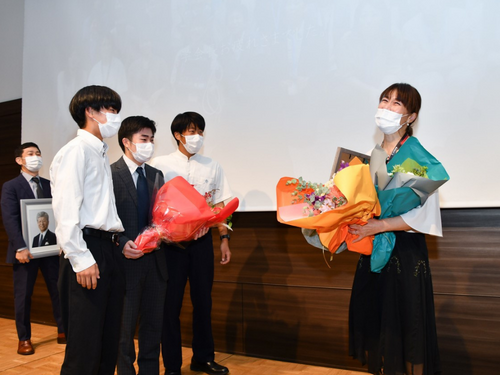 Dr. Nakashima was surprised by her sons and husband during the 33rd Annual Meeting of the Japanese Society of Orthopedic Ultrasonics, chaired by her, with the help of the program staff. The theme of the meeting this year is “Now, the best learning time in history.” (Photo courtesy of Yuko Nakashima)

Nakashima is looking forward to a day when orthopedic patients themselves will be asking for this imaging test.

By design, ultrasounds make interaction easier for doctors, as opposed to MRIs where patients lie inside a tube for a scan. And in contrast with the static images of X-rays and CT scans, ultrasounds show the body’s inner workings in motion, allowing doctors to explain and point out what they’re seeing on the screen as the diagnosis happens.

Nakashima explained how such moments of patient engagement could positively impact their healthcare experience.

Although she knows ultrasound’s many advantages in evaluating musculoskeletal problems, she admits it does have limitations.

“I don’t think ultrasound can solve everything. But I believe that it will help reduce unnecessary tests, many of which are expensive, and reduce the medical costs of patients. It also means reduced radiation exposure, which benefits both doctors and patients,” she said.