Aiming for the Ideal of Peacebuilding: Maintaining Peace at Home Through Self-Reliance 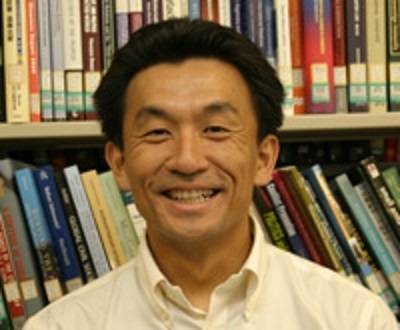 In this edition of Research NOW, we interviewed Associate Professor Hideaki Shinoda of the Hiroshima University Institute for Peace Science.

What can we do to bring world peace? Methods which draw from the human mind such as the arts, philosophy, and psychology, as well as methods which draw from a variety of academic fields such as economics, sociology, and more are being carried out across the globe. Associate Professor Shinoda, however, advocates for the “Rule of Law Approach” as given in “Peacebuilding and the Rule of Law: Theoretical and Functional Analysis of International Peace Activities” (Sobunsha, 2003), which looks at peacebuilding from a strategic point-of-view, said to be the most effective. His approach received high praise as “incorporating a new point-of-view, the rule of law, into peace” and was awarded the 2003 “Osaragi Jiro Rostrum Award” (sponsored by the Asahi Shimbun).

The professor also serves as the director of the Hiroshima Peacebuilders Center (HPC) where he gives various lectures and is involved in internship planning and execution both at home and abroad to support the training of specialists in Japan and Asia capable of being active in peacebuilding areas.

Until now, it was thought that conflicts which frequently occur in various regions of the world were individual in terms of their causes and circumstances, thus methods for resolution should differ by region. While Associate Professor Shinoda admits that there are unique circumstances to each region, he believes that there must be some kind of commonality in the cause of conflicts, and therefore there must be an effective and adequate resolution method for any and all cases.Interested in international government and politics as a student, his volunteer activities with a Japanese refugee association led him to participate in activities to help refugees such as the Kurds in post-Gulf War Iran, Somalian and Ethiopian refugees in Djibouti, Africa, as well as Angoran refugees in Zambia. After going to Cambodia as an NGO volunteer, he worked as the head of the polling place for an election held by the United Nations Transitional Authority in Cambodia (UNTAC). Faced with the realities of conflict, he wondered why these terrible things happen around the world. “I want to make the world a better place, even in a small way, and for that to happen, I need to sit down and think.” With this ideal in mind, he set about becoming a researcher, and since doing so, he has been to post-conflict regions such as Rwanda and the Balkan Peninsula.

Since becoming a researcher, the biggest problem he has seen is “the ruling mechanisms of the government are weak." It’s easy for coup d’etats to occur under authoritarian regimes during civil wars where guerillas are constant involved. History repeats itself and the cause of war lies within the state which knows nothing of a stable history. The professor thought that perhaps injecting a culture of “rule of law”, or re-building the ruling mechanisms of the state, would be an effective method for building peace in such states.

“Peacebuilding and the Rule of Law: Theoretical and Functional Analysis of International Peace Activities” explains the basic notion of “rule of law” and concretely discusses realities of peace activities in each region in problem areas such as peace agreements, elections, justice administration, etc.  It also proposes the “Rule of Law Approach” as a strategic model for practice, bringing a new perspective and methodology to peacebuilding activities. 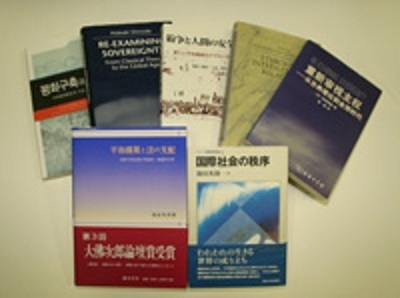 The professor’s books, which have been translated into various languages.

Researchers are like coordinators who stand up against diseases in the name of conflict, while working together with patients and doctors.

“Humans will always get into disputes, and in these disputes, there will always emerge someone who suffers a loss. In order that these people not fall into the negative cycle of retribution, we must search for a policy will they will agree to and will help them live constructively. In order to give hope to their lives to avoid falling into desperation or merely giving up, it is absolutely necessary for some sort of stable model to exist.”

Building a society that considers “following the rules together.” When that happens, society will be stable and a foundation for peace can be built. In other words, “rule of law” is orderly construction based on the dignity of the people, and it must be something more than just “controlling people.”

In order to make “rule of law” a reality, constitutionalism is needed in addition to a system which supports it. The government, army, police, courts of justice, and community must all be functioning properly. For this to happen, support from the international community in human resources education, technical aid, election support, and more, will play a crucial and important role.

“Conflict resolution may be close to facing the disease of conflict. For example, if the United Nations Security Counsel is the primary physician, then they must have mutual trust with the patient. The patients themselves want to get better, but cannot stop the bad habit which is causing the illness. In cases like this, a counselor who can bring order to the mental process is necessary, as are researchers, who develop the latest medical technology.  We are those researchers, and I believe that we should also serve as good coordinators to mediate between all parties.” 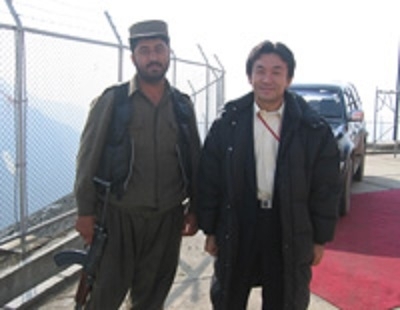 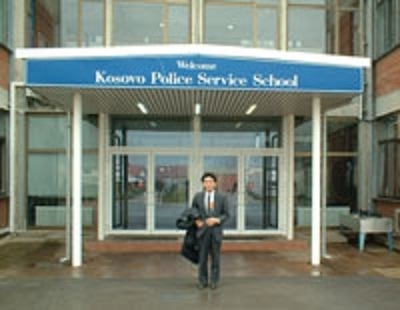 In front of the Kosovo Police Academy (training police officers through the support of international organizations with a new professional awareness and abilities as part of peacebuilding).

Becoming a “Practical Researcher” who has the ability to integrate ideas from both theories and sites.

Associate Professor Shinoda is involved in many activities to bring the “rule of law approach” into practice. In cooperation with regional researchers, he travels to conflict areas and conducts full surveys of the situation by listening to the people, and then based on evaluations he receives and their analysis, he promotes effective methods for resolution to the people and contributes to society.

Again in Minister of Foreign Affairs Taro Aso’s 2006 policy speech, “A School to Build Peacebuilders”, Hiroshima University was entrusted with the Ministry of Foreign Affairs (MOFA)’s “Pilot Program for Human Resource Development in Asia for Peacebuilding” and the Hiroshima Peacebuilders center (HPC) was established. Since June 2008, the professor has served as the director for the Center, giving various lectures and planning, as well as carrying out internships both at home and abroad. On March 31, 2009, the project came to a temporary end; however, with the success of the pilot, it is expected to become the 2009 MOFA “Peacebuilders Development Program” as the program enters its 3rd term this year.

“When I talk to the people in conflict areas, it really makes me think about the large role that Hiroshima has to fulfill. There is a lot of empathy in these people with Hiroshima as a city which survived and made her way to revival from a burned field devastated by the atomic bomb.”

It is hoped that those who learn at the HPC in Hiroshima will contribute to peacebuilding as assets to the wider international community in UN and international organizations, government institutions at home and abroad, as well as NGOs, etc. 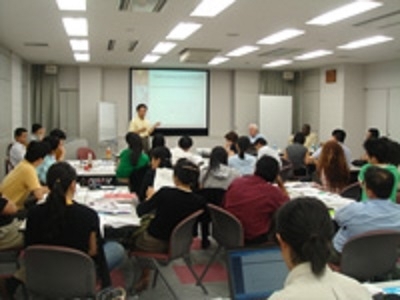 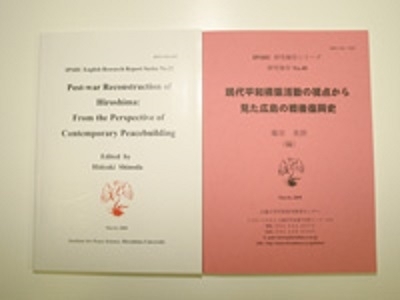 Examining how Hiroshima was rebuilt.

Striving for peace from the eyes of the people in war

Since the announcement of the “rule of law approach” in 2003, the idea has grown in the UN, etc, and research has dramatically increased. While it’s difficult to call this “cutting edge” as it differs from scientific research, Associate Professor Shinoda believed that in a relatively downplayed perspective, perhaps there was something a high importance to research, and made his way to the forefront of an unexplored area of research, one of which is “ownership in local society.”

Traditional approaches such as “rule of law approach” and Disarmament, Demobilization, Reintegration (DDR) activities to support a healthy society tend to be overlooked, however, the “ownership” or “sense of possession” of local society had an awareness of the people concerned, not just of the people overall.

The final ideal of peacebuilding is maintaining peace in your country without having to rely on anyone else. The sense of having supporters “do everything for you” will never lead to independence and self-reliance. The professor’s research is to find out how the people can resolve conflicts themselves, and what type of support is needed from the people’s perspective.

Currently, the professor is involved in research from a new point of view through support such as strengthening the abilities of members of civil society organizations in Sierra Leone.

Updated information:
On June 19, the contract application for the Ministry of Foreign Affairs (MOFA)’s “Pilot Program for Human Resource Development in Asia for Peacebuilding” ended, and the pilot program, which has been running for 2 years, will continue this year at the Hiroshima Peacebuilders Center as a regular program. 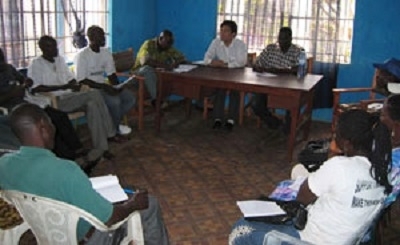 Hearing for the members of the Sierra Leone civil society organization. 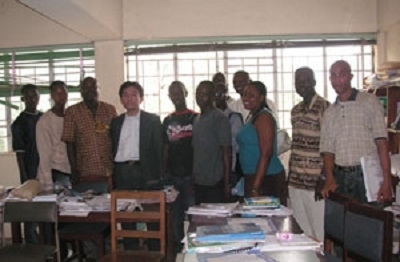 We often hear that “Peace won’t come about just by praying”. So what should we be doing then? This is what Associate Professor’s research is about – it’s an academic field to concretely put peace into practice. There is always a cause of conflict, and if you look for and solve the cause, then you can build peace. That is the larger hope. The professor himself doesn’t stop with just announcing the results of his research, but teaches practical knowledge and passion needed to cultivate peacebuilders. “There are very few examples of success within 5 or even 10 years.” Through continual patient attempts, I hope that the day where “everyone living in peace” becomes a reality will come. (T)