Cultivating a Rich “Sato-umi”: A Message from the Ocean, Delivered by Echizen Jellyfish 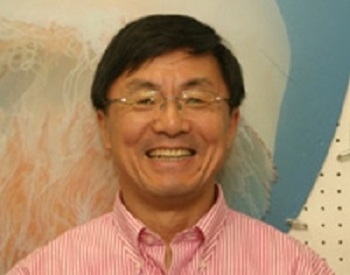 In this edition of Research NOW, we interviewed Professor Shin-ichi Uye, Executive and Vice President (Education) of the Department of Environmental Dynamics and Management, Graduate School of Biosphere Science.
* We will refer to him as "Professor" in this article.

Professor Shin-ichi Uye was awarded the 2010 Prize of the Oceanographic Society of Japan. His “Research on the functional role of zooplankton on coastal ocean ecosystem” was highly evaluated. The ceremony was held after the Oceanographic Society of Japan Spring convention general meeting, which was held in Tokyo University of Marine Science and Technology on Sunday, March 28, 2010. After the ceremony, a prize memorial lecture was held at the University.

Professor Uye has made strides in researching Echizen jellyfish, which have continued to infest the Sea of Japan in large outbreaks and caused serious damage to the fishing industry, and was the first to succeed in their artificial breeding. Little by little, the creature shrouded by mystery has become clearer. Currently, a national counter-jellyfish project (acronym: STOPJELLY) is underway. Eleven institutions from across Japan are participating in the project, commissioned by the Agriculture, Forestry and Fisheries Research Council of the Ministry of Agriculture, Forestry and Fisheries (MAFF), with Hiroshima University (HU) playing a central role. As the principle investigator for the project, the professor is involved in the development of new technology to predict and control the outbreaks of Echizen jellyfish and moon jellyfish.

To Protect a Healthy Ocean, One Must First Know Thy Enemy.

In 1988, the Faculty of Applied Biological Sciences moved from Fukuyama to Higashi-Hiroshima, and the plankton sampling point for his research changed to nearby Hiroshima and Kure Bay. However, the zooplankton from these locations were often coated in jellyfish mucus and died soon after. This was obviously not good news for the professor’s research. Concurrently, fishermen’s complaints about the jellyfish nuisance were increasingly remarkable.

At the time, there were very few researchers properly looking into jellyfish, and thus their nature was largely a mystery. To alleviate the fishermen’s nightmare, someone needed to tackle this problem – it is this thought that led the professor to begin researching jellyfish.

Seeing Changes in the Seto Inland Sea With His Own Eyes

Had the Seto Inland Sea ecosystem really changed? The professor visited fishing villages all around  the Sea and conducted a survey of fishermen about jellyfish and finfish. As a result, he gathered over 1200 surveys with information that could come from those who work on the sea for more than 20 years, which clearly demonstrated  the decrease in fish catch and increase in moon jellyfish abundance.

He reported that the probable causes for the increase in moon jellyfish were global warming, eutrophication, overfishing, and marine constructions. All of these causes stem from human activity.

In 2002, there was a large outbreak of Echizen jellyfish in the Sea of Japan, causing billions of yen in damages to the fishing industry. Although outbreaks of Echizen jellyfish occur very rarely, once per ca. 40 years, during this outbreak, the thought that we might be seeing Echizen jellyfish every year struck the professor hard. Both the Seto Inland Sea and East Asian Seas (i.e. the Yellow Sea, the East China Sea, and the Sea of Japan) are surrounded by land. Just as increases in human activity around the Seto Inland Sea bring increases in moon jellyfish, it makes sense that Echizen jellyfish therefore will also increase given the increase in human activity along the Chinese coast. It has been predicted that these outbreaks will continue in the near future and that prediction proved true as manifested by large scale outbreaks nearly every year until 2007. 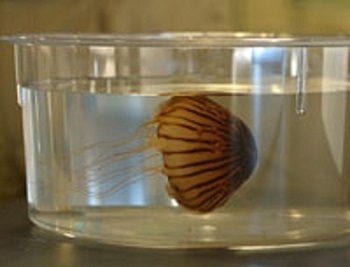 “Sea nettle.” According to an aquarium worker, this jellyfish preys on moon jellyfish. “I really admire the sharp eyes of fishermen who work at sea. Researchers should learn more from them.”

The Power to Survive Since Primordial Times

Just what type of jellyfish is the Echizen jellyfish? “It’s a heavily veiled existence, kind of like a Martian.” Professor Uye attempted the artificial breeding and was the first person to ever reveal the life cycle of this jellyfish. The Echizen jellyfish, like other species, alternate polyp and medusa stages. However, the polyps produce disc-like tissues (ca. 0.5 mm diameter) called podocyst which can rest long-term until polyp excyst. When the timing isn’t right for jellyfish, they await a better time like plant seeds, and when the time comes that they “want to multiply”, they emerge all at once, which may result in large outbreaks.

Even during the spawning season, the reproductive glands of healthy jellyfish are immature; however, if their body becomes injured and weak, the maturation of eggs and sperm rapidly progresses. When their lives as medusae are in danger, it appears as though a switch goes off in their body to allow them to leave behind offspring.

Echizen jellyfish ride the Tsushima Current to the Sea of Japan, where they grow bigger as they head north. They can weigh up to approximately 200 kg with umbrellas 2 m in diameter, and with females that carry over a billion eggs. The more the professor learns about this jellyfish, the more he starts to think “That’s incredible! I give up, there’s no way I can win against these guys!”

“The harsh sea environment 600 millions years ago was a kingdom of jellyfish. The prosperity of marine life which appeared later caused the kingdom to fall, however, they were still able to outlast in the ocean. Now, it could be said that they might be getting revenge on marine life with that stubbornness of theirs. But this is a retrogression of ecological evolution caused by humans. In order to ensure that humans can survive on this earth, we must do something to create fertile seas abundant with aquatic life, namely fish.” 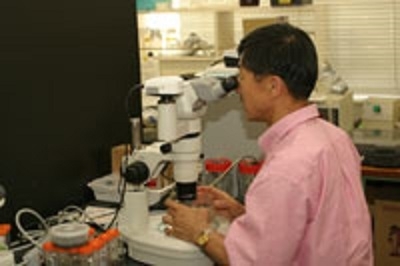 In the lab where he succeeded in artificially breeding Echizen jellyfish.

In order to stop the serious damages to the fishing industry from jellyfish, a large project, commissioned by the Agriculture, Forestry and Fisheries Research Council, a division of MAFF, to HU was begun together with 11 institutes from all over Japan. The project is called “STOPJELLY” (“stop jellyfish”). Although large outbreaks and increases in jellyfish are fundamentally rooted in increases in human activity, the project aims to predict and control jellyfish outbreaks by taking an in-depth look at the cause and consequent relationship of the issue.

In order to look at the emergence of young Echizen jellyfish before they come to Japan, the professor observed the jellyfish in the Yellow Sea and East China Sea abroad a ferry between Japan and China. Based on 2 observations made in June of this year, he has confirmed already large numbers of jellyfish. It appears that there will be a large outbreak once again this year too.

Outbreaks of Echizen jellyfish are like typhoons: they cannot currently be controlled by science. It is first necessary to put out “jellyfish forecasts” of whether there will be a jellyfish typhoon, and then when and where the typhoon will strike. Based on these forecasts, fishermen will be able to take the necessary countermeasures to reduce damages to the industry.

As a result of long-term studies, the professor was able to find common factors which induce jellyfish outbreaks. Using a computer simulation to predict changes in the amounts of jellyfish and fish, an analysis is underway to determine what conditions are necessary to reduce the number of jellyfish. This research was made possible by proper parameterization which became clear from the ecological study of jellyfish. 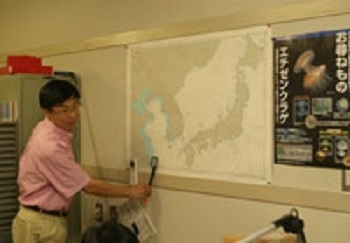 Echizen jellyfish ride the currents to Japan. A large outbreak is predicted this year.

It’s difficult to solve the issue of moon jellyfish outbreaks in the Seto Inland Sea as well.

The idea of“Sato-umi” isn’t just for the Seto Inland Sea. The professor wants to broaden the notion to East Asian seas as a “large Sato-umi”. Professor Uye realized that in order for that to happen, we must change current social systems completely. The professor believes that  marine environmental changes and the related outbreaks of jellyfish are a message of the urgent need for humans to change their ways of life and their ways of thought. 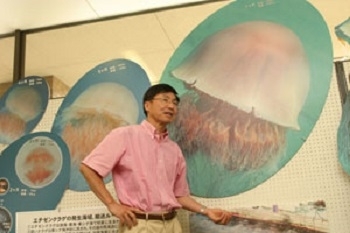 With a large Echizen jellyfish at the entrance of the Graduate School of Biosphere Science.

“I think the ocean has sent the jellyfish as messengers to humans. The Echizen jellyfish who normally live quietly and out of sight suddenly appear in large numbers, and are overwhelmed by their grotesque figures in order to try and tell us something. This was how I explained things to my son who was in high school. He then said, ‘It’s like the ohmu in Nausicaa of the Valley of Wind.’ When I watched the film (Nausicaa), I was convinced. The beginning of Ponyo on the Cliff was an explosion of life in the ocean as well, and when Ponyo came riding in on a jellyfish, I felt like she too had come with a message for humans. I was really moved. I spent 3 years as a student at the HU marine station on Sensuijima off Tomo, Fukuyama City, and so the scenery from the movie (Ponyo) was very nostalgic for me.

If Professor Uye and Director Hayao Miyazaki had the chance to talk, I’m sure that they would enthusiastically discuss how nature and humans should interact with one another. It would be a conversation I wouldn’t want to miss. (T)