The World’s First Successful Development of Human Autism in a Mouse Model! 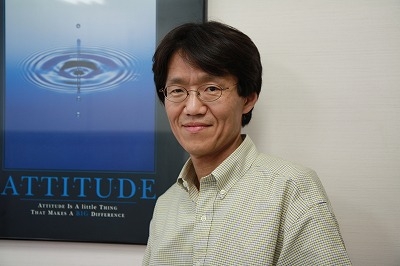 In this edition of Research NOW, we interviewed Professor Toru Takumi, Division of Molecular Medical Science, Programs for Biomedical Research, the Graduate School of Biomedical Sciences.

Nikkei Inc. announced “technological trend research” (the 3rd time in 2009) to evaluate principal research development results which were displayed between June and August in 2009. (Nikkei Inc. as of October 8, 2009) The research of Professor who developed a model mouse with chromosomal abnormality similar to Autism was ranked third overall for his “developmental disorders including Autism have been  increasing, but investigation of the cause and development of medical treatments haven’t really advanced. Research advancement is expected with the appearance the model mouse.”

He was awarded the second prize of the 46th (2009) Baelz which is presented to the author of excellent medical papers. The theme of the article this year was “Mental disorders- depression, schizophrenia etc”, and the prize targeted article was “Development of Autism Human Model Mouse”. The presentation ceremony was held at the ambassador's residence on November 18, 2009, and he was presented a diploma and medal by the Boehringer Ingelheim Board of Directors Chairman Andreas Barner.

Trained as a molecular biologist, Professor Takumi has successfully identified several genes, some of which are known to be the causative genes for arrhythmia, hearing loss, sleep-wake disorder, Lou Gehrig's disease and more. He has a background in research on the molecular mechanisms for circadian rhythms (the physiological phenomenon or the changes which occur in a roughly 24-hour cycle in most every living organism such as animals, plants, bacteria, algae, etc) in brain functions.

His latest research attempts to take a molecular biological approach to mental disorders which does have diagnostic standards, but does not have objective diagnostic methods which can be performed by machines such as blood tests and diagnostic imaging.

In June 2009, Professor Takumi announced his success in creating a mouse with a duplication of mouse chromosome 7, which corresponds to the human chromosome 15q11-13. The duplication of this chromosome occurs most frequently as a cytogenetic abnormality in autism.

After the completion of the human genome (as of June 2000, approximately 90% had been completed), much research began on human illnesses. In recent years, the development of “knock out mice” whom have had certain genes destroyed and rendered useless through manmade processes, has been steadily developing. However, this time, the Professor used a complex and technologically difficult chromosome engineering technique to create a mouse with the exact same cytogenetic abnormalities as a human. Delayed squeak development (communication impairment) as well as stubborn behavior (such as continuing to follow the same path despite changes to the environment) were confirmed in the mouse, which not only displayed behavior similar to human autism, but was certified as the world’s first mouse model with the same cause (genes) of a human illness (autism).

(Note 1) Human genes generally inherit 1 set of genes from each their mother and father’s genome. It had been thought that normal humans had 2 copies of genes for each cell (one from their mother and one from their father). Recently, it was discovered that some individuals only had 1 copy of genes, or even more than 3 copies (CNV) of genes. Differences in DNA-base sequences have been well-known in previous research, however, differences in the number of genes (such as in CNV) have caught the attention of researchers as the probable cause of human diversity and illnesses. Professor Takumi created the mouse model with 1.5 copies of the regions from the mouse’s father. 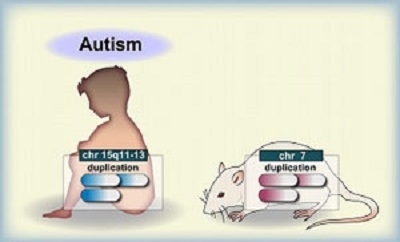 The creation of a mouse model with autism using chromosome engineering techniques. The human abnormal chromosome 15q11-13 was artificially constructed on the mouse chromosome no. 7. 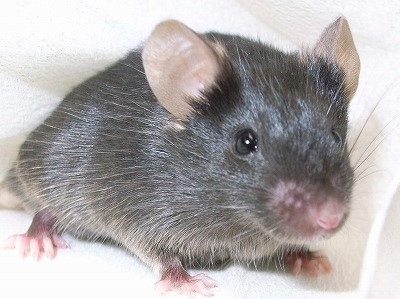 The genetically engineered mouse with abnormal chromosomes for human autism.

The results are the outcome of years of long research which began in 2001 when Professor Takumi headed a research laboratory at the Osaka Bioscience Institute.

It is also the result of collaborative research with the Sanger Institute (UK), Kyoto University, Fujita Health University, Banyu Pharmaceutical Co., Ltd. (also known as Merck & Co.), and Riken, and the Japanese Ministry of Education, Culture, Sports, Science and Technology’s “Integrated Brain Function Research” Grant-in-Aid for Scientific Research on Priority Areas (part of the Grants-in-Aid for Scientific Research program) and was published in the US academic journal, “Cell” (one of the top three journals in the area of biology and medicine) on June 26, 2009.

The cover of “Cell” Volume 137 was drawn by the artist Kishin Funada (Note 2) especially to celebrate the occasion of Professor Takumi’s thesis being published.

(Note 2) Kishin Funada is the son of Japanese-style painter Tamaki Funada a native to Kure City in Hiroshima who settled in Hiroshima after the war to paint – he played an active role in Japanese art. His works cover a wide range from Japanese-style paintings to modern art, film, and even sound. In 2007, his style was highly acclaimed and his works were displayed in the hotel rooms and foyer of The Peninsula Tokyo Hotel in Marunouchi, Tokyo. He has been influenced by the wide range of works left by his father from abstract art to modern art, as well as classical detailed art styling. He is currently a research student in HU’S Department of Anatomy, stating that in addition to his desire to understand and memorize the very core of what he creates, he would like to base his works on logical theory as Japanese art never experienced a clear Renaissance. The Department of Anatomy is right next to Professor Takumi’s laboratory. When he happened to participate in a party between the laboratories, the two met and it ended up being the reason that Kishin drew the cover for “Cell”. 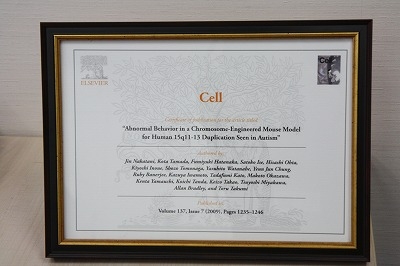 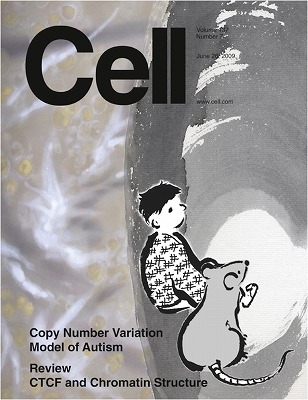 Picture of the cover. The cover is divided into the real world on the left (flowers) and one’s own private world (on the right).

Autism (Note 3) is defined as a disease which occurs when the central nerve functions of the brain are damaged, however, why the damage occurs, which parts of the brain are impaired in which ways, and other such mysteries still surround the damage as well as the mechanisms of the disease.

Until now, developmental disorders such as autism were a subject of educational research (education of physically and mentally handicapped children) and seen as a mental or environmental problem. It was only recently that it was handled by pediatric psychiatrists as a disease which occurs due to a chromosomal abnormality.

There was a time when parents were given a hard time due to misunderstandings about autism being caused by improper care of their children when they were infants, or that the environment they were raised in was bad. However, from the 1960s onward, different research was carried out on autism from post-prognosis to family research as well as biological research, and it was made clear that parents or guardians were not the cause of the disease. The disease was seen in movies and TV dramas, and was finally recognized by the public.

(Note 3) Autism is a behavioral disorder which appears after the age of 3. It has 3 large clinical manifestations: impaired social interaction, impaired social communication, and restricted and repetitive behavior.

In the 1970s, it was thought that of 1,000 pre-school-aged children in Japan, 2-4 of them had autism. In the Autism Society Japan guide, it is written that “in the narrow definition, approximately 3 in 1,000 children have classic autism, with 1 in 100 having pervasive development disorder (PPD) or autistic spectrum disorder (ASD). Thus, it is not exactly a rare condition.” (From the 2004 “Guide to Autism – Do you know the Rainman next to you?”)

Looking to the Future

“It’s been proven that if one of a pair of identical twins has autism, 90% of the cases have an autism-related abnormality. Since not all cases of identical twins are autistic, while there may be some environmental causes, it can be said that it’s clearly genetics which have an effect,” says professor Takumi.

A peculiarity of mental illness is the difficulty to approach research using clinical examples. While the fact that it’s “hereditary” may give it a bad image, it actually shows that is may be possible to use a biological approach on mental function abnormalities (which until now had been the farthest thing from being biological analysis) just like many other diseases.

As the results of this research have accelerated research into autism, it is hoped that future research will tie into the clarification of developmental disorders such as autism, and the development of curative medicine. 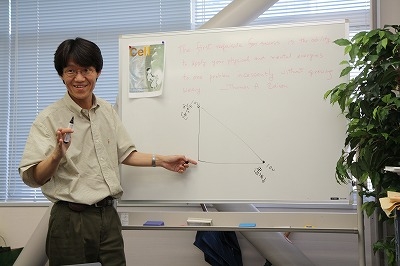 It’s possible to attack autism with science, just like any other disease.

When I asked the professor about what he emphasizes in cultivating future researchers, he replied “an environment where the top class researchers of the world can come together” and “English communication skills”, showing his appreciation for the support from the Sanger Institute and the partnership of many other institutions which led to these research findings.

“While it might be important to send someone to research institutions whether inside or outside of Japan, if you’re able to continually invite top world-class researchers to your institution, it will enhance the skills and knowledge of the entire laboratory. If you want to interact with them, then of course, you must be able to communicate in English, which is why I hold most of our meetings in English. I want to promote interaction and the importance of chance meetings, to make my dream of not just “ALL JAPAN” but “ALL HIROSHIMA” a reality. I can’t wait to meet those not just from HU, but from around and outside Japan as well who have the drive and passion for science. For their sake, we’re securing research funds and doing our best to create a place where human resources can gather and grow together.” 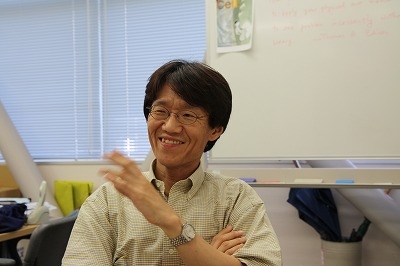 It would be great to be able to express subtle nuances in English!

“Today, post-completion of the Human Genome Project (on April 14, 2003, the leaders of 6 countries including Japan, the US, the UK, and others, announced the completion of the mapping of the human genome), the condition of many illnesses have become clear at the molecular level; however, mental illnesses still, as of this day, remain unclear. Autism, like many other illnesses, occurs because of biological abnormalities. I want to use a biological approach to understand what troubles the hearts and minds of children,” says Professor Takumi, displaying his desire to find the source of the issue.

“I love maps!” The professor actually wanted to become a geographer, but the biography of Hideo Noguchi that he read as a child led him to become a scientist. He studied diligently while attending prep school. When his dream to become a scientist came true, he didn’t immediately focus on research. Instead, he has many chance meetings at the turning point of his life which would decide the road ahead. “Chance meetings with others are so important, whether in personal life or professional life,” says the professor, who even today cherishes the word, “kaikou” (chance meeting) which he was given by his prep school teacher.

The most important part of universities is education, and the most appealing thing about universities is the young people who gather there. Not just anyone can work toward becoming a professional athlete or artist who is free to do what they love, but you can become a scientist who loves his/her work through perseverance, plus you’re guaranteed a reward. The professor wants to continue to be a person that others can respect and that young researchers can look up to and say “research is fun!” or “I want to be the best researcher ever!” instead of considering money first. I was really moved by his words, and saw a glimpse of greatness in his eyes. (O)