I want to make people struggling with poor vision happier! 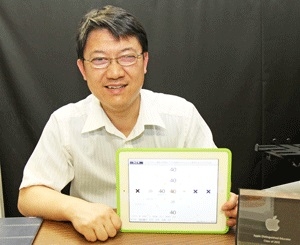 Associate Professor Ujima has developed the Handy Daily Visual Field Measurement Tool, a free iPad app that allows people with low vision to measure the range within which they can actually see and the font size that they can read.

This tool makes it possible to objectively measure how much difficulty a person has in seeing things (something that differs from person to person), so that this information can be used to provide educational support. We interviewed Associate Professor Ujima about the background to the development of this app and its prospects for the future.

For further details of the nature of this research, please visit the Ujima Laboratory website.

“If you can understand what the condition of finding something hard to see means, and how it actually appears to the person concerned, you can work out how to create an environment that makes it easier for that person to see. That’s the basis of my research. In addition, pedagogy is a practical science, so another key focus is how to reflect the results to the person who actually has the problem.”

Apparently, the Handy Daily Visual Field Measurement Tool that he developed makes it possible to objectively measure the kind of problems in seeing things that are difficult to be aware of oneself, such as being unable to see characters at the top right of a page or screen, despite being able to see things everywhere else.

“Our aim is to gain an insight – however slight – into the way in which that person sees and then provide appropriate educational support. The app integrates the process of measurement with teaching methods that reflect the results. Users do need to practice using the app. The practice method is important and one of the strengths of education is teaching people skills in a way that makes it easy for them to learn those skills.”

The Handy Daily Visual Field Measurement Tool on an iPad screen. The person with visual impairment looks at the center of the circle and numbers and characters are successively displayed at various points on the surrounding circles. The subject says how far from the center of the screen and how big they are. Based on the results, the learning environment can be tailored to that person’s way of seeing and give specific consideration to this in their education.

Using the iPad along with other tools makes it more convenient and effective!

At present, Associate Professor Ujima’s lab has ten iPads on loan to students who are struggling with visual impairment. In addition, he tells us, there are support tools in the form of large-print textbooks, magnifying glasses, and computers with magnifiers, but schoolchildren are often reluctant to use these at school.

“But so far, not a single child has said ‘I don’t want to use an iPad.’ If they’re going to have to use something, of course they want it to be something appealing. But we can’t deal with everything using iPads alone, so in that kind of situation, we have to use them in combination with something else. Existing optical aids all have their own advantages, so it’s more effective to use them in tandem.”

Associate Professor Ujima actually showed us a large-print textbook that he had in his lab.

The print is larger, so what would normally be a single textbook for a subject actually takes up three volumes in the large-print edition! The layout also differs, so if the teacher said “Look at the table on page x,” students using large-print textbooks wouldn’t be able to find it.

“People today are very fortunate, you know. Large-print textbooks are published for all subjects at the elementary and junior high school level now, but in our day, there were no large-print textbooks or stylish magnifying reading devices. But although it has become more convenient in that respect, there are students going to school carrying satchels weighing almost ten kilograms, because of the heavy large-print textbooks inside. In that sense alone, I think it’ll be a bit easier for them if we can relieve some of the burden using iPads,” he says.

Using an iPad, you can enlarge the characters in a textbook.

His own experience made him want to find a scientific solution to the problem of things being hard to see.

People without a disability have a tendency to say, ‘You’re able to see now, so just put up with the extra weight.’ But that kind of attitude implies that not everyone has an equal right to be happy. After all, product development and technology development come about from trying to make people happy. That’s what happened with TV remote controls. It’s only natural that people gradually adapt to new things and want more convenient things, and it’s as a result of that process that we have the society we do today. So in that kind of situation, why should those with disabilities be the only ones having to put up with comments like ‘Stop asking for such extravagances!’? If that’s the basic premise, we can’t call this a convivial society,” says Associate Professor Ujima, with evident passion.

When asked what made him decide to study vision disorders, he replies, “The basis for that was the fact that I myself have a vision disorder and I know what it’s like to struggle because it’s hard to see. That’s why I wanted to conduct experiments and research, to find scientific solutions to the issue of things being hard to see; I thought that once I had evidence, I could then suggest educational support methods and training techniques.”

First understand the other person’s feelings, then do your utmost to help.

On Fridays, Saturdays, and Sundays, Associate Professor Ujima and his team hold education consultation sessions at the Center for Special Needs Education Research and Practice, to help people with vision disorders. The people who come to seek his advice – those struggling to see things, their family members, and the school homeroom teachers of such students – come not only from within Hiroshima Prefecture, as one might expect, but from other prefectures as well.

“Their ways of seeing, their ages, their manual dexterity, and their affinity with technology all differ from person to person. As we carry out tests and interact with them, we can generally work out which app to use, but there are cases in which things don’t go so smoothly. Sometimes new needs emerge, when you think, ‘It would be good if we could do it that way instead.’ On those occasions, we can’t give an answer straight away, but then everyone in the lab devotes their energies to studying the issue.”

He says that there’s something that he says to all of the students whom he instructs.

“I tell them, first understand the feelings of these people who have come all the way to Hiroshima University. These people who have made the effort to come here have high hopes of our lab, so we mustn’t forget that. If you remember that, it’s only natural to do your utmost to help the person in front of you. I think that’s the most basic thing.”

As he says this, it’s easy to visualize him diligently helping the people who come to consult him.

All opinions greatly welcomed, whether positive or otherwise!

When asked about his future goals as a researcher, he says, “As a researcher in a faculty that seeks to nurture teachers, I think that basic research into visual perception is vital, so I’d like to carry on with that.

But not only that. I’d also like to systematically build up basic theory and clinical practice, so that if research output is used in clinical practice, we can follow up on how it is used, in order to establish an academic discipline of ‘vision disorder pedagogy’.”

Finally, “The number of people who have difficulty seeing shoots up after the age of 40-50. Education focused on people with vision disorders really is something that affects everyone. What we’re doing isn’t a particularly big deal in terms of school education, but looked at from the perspective of society as a whole, it’s a field in which quite a lot of people can benefit. In that sense, I think that organizing vision disorder education into more of an academic discipline would be tremendously meaningful for society as a whole. I want to make people struggling with poor vision happier, you see,” he says with a smile.

Using the Handy Daily Visual Field Measurement Tool in everyday situations such as school classrooms makes it possible to objectively measure the subjective feeling of having difficulty seeing, which can be difficult to explain to others. I thought this was amazing.

Listening to Associate Professor Ujima, his passionate desire to “make people who are struggling happier” really came across and I felt that it was this enthusiasm that led to the development of the app. He says that there are more than 1.5 million people nationwide whose corrected eyesight is 0.1-0.5 at best. In addition, he says that as they age, their vision often deteriorates due to eye diseases such as cataracts. In fact, vision disorders are problems that affect everyone, sooner or later. Associate Professor Ujima’s animated expression as he talked about developing better apps and furthering his research was most impressive. (M)