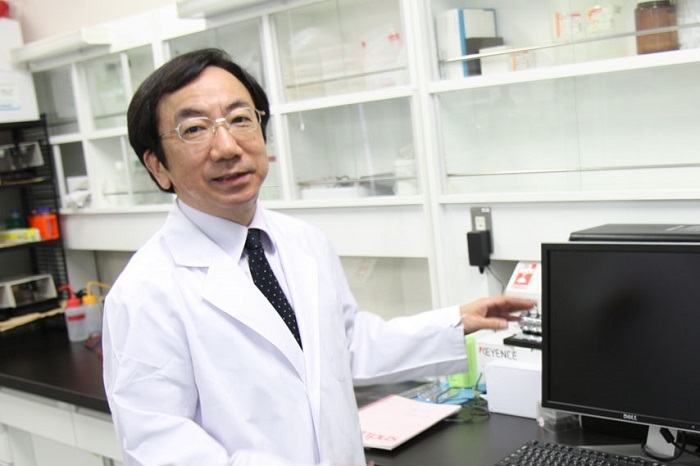 We talked to Professor Shinya Matsuura, Research Institute for Radiation Biology and Medicine.

Professor Shinya Matsuura’s research focuses on an intractable genetic disorder that causes sufferers to be born with a chromosome instability. Professor Matsuura’s group has proved that an intractable genetic disorder that gives rise to pediatric cancers develops as a result of an abnormality in a switch located on the exterior of a gene that regulates the number of chromosomes.

This research outcome was published in December 2013 in the online edition of the Proceedings of the National Academy of Sciences of the United States of America (PNAS). It subsequently appeared in print as a commentary(*) featured on the cover of PNAS and won high praise, including “the causal relationship has been completely proven with a carefully-considered technique” and “a boost to efforts to explain the cause of intractable genetic disorders whose cause is currently unknown”.

(*)The commentary can be accessed here.

We interviewed Professor Matsuura about his work.

Thanks to dramatic progress in DNA sequencers, which decode genetic information, we are currently entering an age in which we are able to progressively identify the genes responsible for genetic disorders. At the same time, there are still many genetic disorders in which no abnormality (mutation) can be found in the gene itself.

Moreover, genes are “blueprints for proteins” that exert biological functions, but genetic switches that adjust the quantity of proteins supplied to cells are scattered around the region outside genes (the exterior of genes).

However, research approaches focused on the exterior of genes are usually very difficult, so little progress has been made in understanding the conditions that arise from that area. PCS (premature chromatid separation) syndrome(*), the focus of the research conducted by Professor Matsuura and his team, was one genetic disorder of this nature.

(*) PCS (premature chromatid separation) syndrome: Causes severe microcephaly and mental retardation, and pediatric cancers such as Wilms’ tumor and rhabdomyosarcoma. It is a rare disease, with only 40 cases worldwide at present, 20 of which are found in Japan.

He says, “Patients with PCS syndrome have little of the BUBR1 protein that maintains the normal number of genes when cell division occurs, so the number of chromosomes becomes unstable, causing multiple pediatric cancers. There was no doubt that the patients had an abnormality (mutation) in the BUBR1 gene, which is the blueprint for the BUBR1 protein.”

However, in some patients, it was apparently not possible to find an abnormality(mutation) in the gene itself, no matter how closely the DNA was examined. 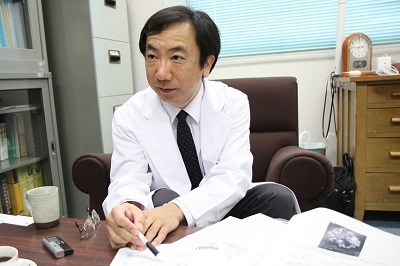 Professor Matsuura explains the results of his research.

Professor Matsuura thought that perhaps the abnormality (mutation) was on the exterior of the gene, rather than inside it, so he examined every part of the exterior of the BUBR1 gene in seven patients, making full use of of a next-generation sequencer that had just been installed at the Research Institute for Radiation Biology and Medicine at that time.

“When I did so, I found that one of the bases in the intergenic region 44,000 bases away from the BUBR1 gene had changed from G (guanine) to A (adenine) in all of the patients. A change in this single base is very rare in the general population, so the possibility occurred to me that it might be the cause (mutation) that I had been searching for. On the other hand, I couldn’t deny the possibility that this change just happened to coincide in these patients and that it was unrelated to the disease,” he says, looking back at the situation at that time. 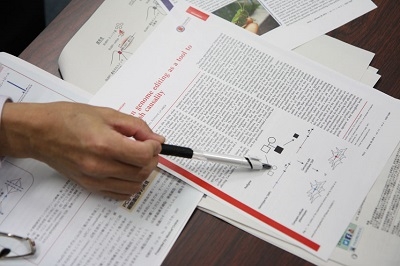 Materials showing the results of the research

The genetic information in DNA is passed on from parent to child in the arrangement (base sequence) of four types of base (A: adenine; T: thymine; G: guanine; C: cytosine). In human genomic DNA, the bases are transposed A→G or T→C in around 1 in every 300 bases, varying from one individual to another. In most cases, these have no genetic effect whatsoever, but some are related to individual differences in such matters as predispositions and susceptibility to disease, so they are important seeds in genetic diagnosis and drug development. However, even though a change in a single base specific to patients with this condition had been found, it is difficult to determine from an examination of the base sequence whether this is a coincidence or whether it is the cause of the condition (a mutation).

So what can be done to prove that the change in the single base is related to the condition, with a view to treating that condition?
Professor Matsuura points out, “It is essential to demonstrate not only that there is correlation, but also that there is causality.”

He says, “In order to prove that a change in a single base outside the gene was the cause of the condition (a mutation), it was necessary to demonstrate the function of that base. So we worked on the issue of whether we could replicate the chromosome abnormality in patients’ cells by artificially triggering a change in the single base in normal human cultured cells. In order to do so, a technique that enabled us to manipulate genetic information at the single base level was essential.”

The single-base-pair editing technique that Professor Matsuura and his team needed is a technique that makes it possible to freely manipulate one specific base pair among the 300 million base pairs that the human genome contains.

Professor Matsuura explains the advantage of single-base-pair editing as follows.

“A similar technique was already known, but it has shortcomings in terms of the fact that it introduces superfluous, unwanted changes (footprints) around the base being altered, and not all bases in every location can be manipulated using this technique. Although the tests involve many, quite complex steps, the method that we devised has the advantage that it allows a single base to be altered with certainty and without leaving any footprints. In this case, we are transposing from G to A a base that is located 44,000 bases from the BUBR1 gene. If the quantity of the BUBR1 protein declines in a cell that has been transposed to A and the same abnormality in the number of chromosomes occurs as in the cells of the patients with the condition in question, we can clearly identify this change in the single base as the cause (a mutation).”

Regarding the results obtained using single-base-pair editing, Professor Matsuura says, “The results we obtained were as we had anticipated. The cells in which the base had been transposed to A developed the same abnormality in the number of chromosomes as seen in the cells of patients with the syndrome. Furthermore, we ascertained that this base acts as a switch adjusting the BUBR1 gene. We discovered that the BUBR1 protein is maintained at a certain level in healthy people, but in patients with the syndrome, this switch is broken and does not function, resulting in the quantity of the protein falling to less than 50% of the level found in healthy people.”

Single-base-pair editing is a groundbreaking technique that overcomes the imperfections of the research techniques used hitherto. Furthermore, it is attracting attention because it has the potential to be applied to genetic analysis of such commonplace conditions as the lifestyle-related diseases diabetes and hypertension.

“I want to shift from research focused on understanding genetic disorders to research focused on treating them. We cannot repair the actual switch in the patient’s body with current technology, but if we could find a drug that could make it function, then we could get the gene to work normally by having the patient take that drug, resulting in the normal quantity of the protein being produced. This has the potential to lead to a radical treatment for genetic disorders, so it’s an issue that I would like to continue working on in future,” says Professor Matsuura, with enthusiasm. 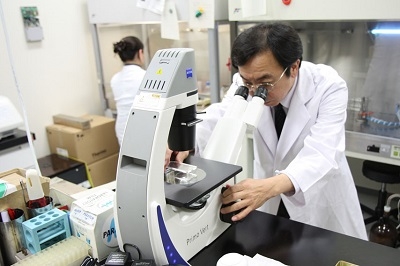 Professor Matsuura is doing research in the laboratory.

Moreover, he says that the results of this research have been achieved precisely because so many people collaborated in the project.

“The young researchers in my classes made a tremendous contribution to this research. Associate Professor (then Assistant Professor) Tatsuo Miyamoto identified the causative mutation. Moreover, Hiroshi Ochiai, then an assistant professor and currently a specially appointed lecturer in the Graduate School of Science, was kind enough to install artificial nuclease infrastructure into his classroom. Dr. Ochiai obtained his degree while studying under Professor Takashi Yamamoto of the Graduate School of Science, which is a center for research into genome editing in Japan. Furthermore, this research could not have been brought to fruition without the teamwork of numerous clinical physicians and joint researchers from the Research Institute for Radiation Biology and Medicine and the Graduate School of Science, so I am sincerely grateful to them.”

Professor Matsuura was formerly a practicing physician in the pediatric department at Yamaguchi University Hospital. It was his experiences there that motivated him to pursue research into hereditary genetic disorders.

“There are many specialist fields within pediatrics, but I mainly dealt with children who had genetic disorders. I saw many cases in which the parents of children with genetic disorders subsequently went on to have children with the same disorder. It was a time when we had no idea whatsoever concerning the precise gene in which the abnormality occurred. Now, prenatal diagnosis using DNA is possible, but we didn’t have that at that time, of course. My desire to do something – however small – to change that situation and to be of use to patients with such conditions led me to specialize in research into genetic disorders.” 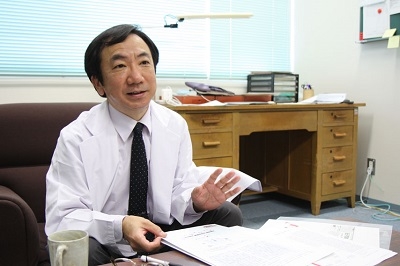 Professor Matsuura talks about his credo of pursuing research that will be of use to patients.

Apparently, there are cases in which even healthy parents can give birth to children with genetic disorders.

“For example, even if the disorder itself only occurs in one in tens of thousands of people, the proportion of carriers of the genetic abnormality that causes the disorder is one in every hundred people. There are more than 500 known conditions, so everyone carries the genes for around 5 or 6 conditions. In other words, if the person you marry has the same abnormalities, there is a possibility that you will become the parent of a child with a genetic disorder. Moreover, even if you are healthy now, you might develop a genetic disorder in the future. In other words, everyone has the potential to be affected by a genetic disorder.”

Professor Matsuura says, “The more research you do, the more the number of things you don’t know increases.” Finally, we asked him about the prospects for future research.

“Research into genetic disorders in which chromosomes are involved is closely linked to the research theme of the effects of radiation. Currently, in Fukushima, there is widespread anxiety about the health risks arising from low-dose radiation exposure. Radiosensitivity is known to vary from one individual to another, and it is likely that changes in a single base in a gene that protects the chromosomes are involved in this. In my laboratory, we want to work together as a team and, by introducing ‘changes in single bases that are candidates for the base affecting radiosensitivity’ in cultured cells using the single-base-pair editing and investigating the resultant changes in radiosensitivity in those cells, we want to identify the genetic information that determines individual variations in susceptibility to radiation and conduct basic research that will make it possible to provide custom-made radiation protection.” 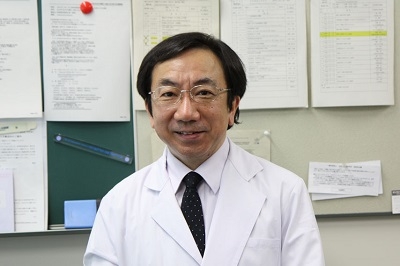 Professor Matsuura’s explanation that everyone has the potential to be affected by a genetic disorder came as quite a shock. Precisely because he is a professor who is fully aware of these things, his assertion that he wants to conduct research that will benefit patients had even greater impact. I sincerely hope that he will make further progress in his research and that the numerous intractable diseases whose cause is unknown will come to be understood. (i)