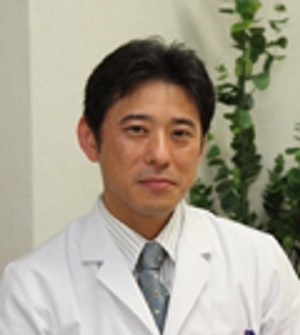 In this edition of Research NOW, we interviewed Professor Hideki Ohdan in Programs for Biomedical Research at the Graduate School of Biomedical Sciences.

(2008 September 3rd, Interviewed by the Public Relations Group, Office of the President)

After graduating from Hiroshima University, Professor Ohdan entered the former Department of Surgery II in the Faculty of Medicine, specializing in general external medicine, organ transplant (kidney, liver transplant), and hepatic surgery. While Professor Ohdan has primarily focused on clinical liver transplant and research, he pursued research in transplantation immunity, which he had began during his days in graduate school, at Massachusetts General Hospital during a post-graduate study abroad at Harvard University, USA. In the field of hepatic surgery, a patient's condition is analyzed at the cellular and molecular level. For example, when conducting surgical treatment for liver disease, it is necessary to have an accurate grasp on the homeostasis of blood circulation and metabolism as well as invasions of natural defense mechanisms in carrying out the choice of operative method and perioperative evaluation.

The liver is one of the most essential organs in the human body. It is said to have over 500 functions, and if one were to build a factory which had all the functions of an artificial liver, it would take up all 23 wards of Tokyo -- that is how many different functions it has. However, the 3 primary functions of the liver are metabolism, nutrient storage, and detoxification.

It is possible to cut away 70% of a healthy liver, and 2 weeks after surgery, the remaining 30%will have doubled in size, going on to regaining approximately 90% of its former size in just 6 months. In other words, as the Professor explains, the liver has a 70% reserve capacity. In this light, the liver is an active organ with reserve capacities, however once affected by chronic hepatitis or cirrhosis, that reserve capacity decreases. What's more, symptoms rarely present themselves. Once the reserve capacity begins to fall to zero, symptoms such as jaundice, hydroperitoneum, and encephalopathy appear, which is why the liver is known as "the silent organ".

"We know the cause, yet we cannot cure it; that is our greatest frustration"

The number one cause of death in Japan is malignant tumors. Of those deaths, over 30,000 deaths per year are from liver cancer, making malignant tumors of the liver the number 3 killer of men and number 4 killer of women. In the case of stomach and similar cancers, the cause is not clearly understood. However, "we know that the cause of most all liver cancers are from Type B or Type C Hepatitis. We know the cause, yet we cannot curse it - that is our greatest frustration," says Professor Ohdan. There are an estimated 3.5 million people in Japan with Type B or Type C Hepatitis, including carriers who display no symptoms. As the symptoms of hepatitis progress, they turn into chronic hepatitis or liver cirrhosis, and in those with chronic hepatitis, cancer very often occurs. It is stressed that if hepatitis could be completely cured, then it would be possible to curb liver cancer. 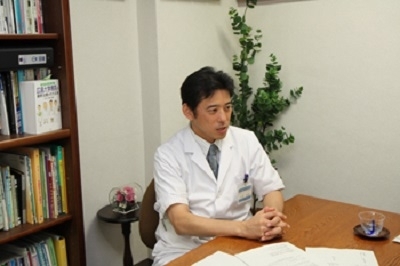 "That is our greatest frustration," says Professor Ohdan.

"There are many issues in liver transplantation"

Medical treatment methods for liver cancer include surgical ablation, percutaneous treatment method (*1), and transcatheter arterial chemoembolization (*2), and it is of the utmost importance to choose a treatment method which corresponds to the patient's liver reserve capacities. However, liver cancer is often accompanied by irreparable cirrhosis of the liver (liver cell damage becomes so great that the remaining healthy cells cannot perform functions vital to the human body), and in medical cases of depressed liver reserve capacities, treatment by traditional methods actually increases the risk of irreparable liver cirrhosis. In cases such as this, liver transplant is the only complete cure, however, in the case of advanced liver cancer, there is always the fear of cancer recurrence post-operation.

(*1) Methods such as Percutaneous Ethanol Injection Therapy (PEIT) where using ultrasound imaging to guide them, doctors inject ethanol into the cancer to metamorphose the make-up, and Radiofrequency Ablation (RFA), which uses electric heat (radio waves) to cauterize the cancer.

(*2) Method of killing cancer cells by cutting off the blood vessels (arteries) which supply them with nutrients. Includes administering anti-cancer drugs.

Liver-derived NK (Natural Killer) Cells Not Only Have the Numbers, But Also the Potential

There is the risk of cancer recurrence after liver transplants as a cancer treatment, and, according to the Professor, the entire world is eagerly awaiting the establishment of a preventative method. While it had been previously known that there was an abundance of NK cells in the livers of mice, it was not known whether or not there was that same abundance in the livers of humans. Livers surgically removed from donors are cleaned of blood with an organ preservation liquid (organ perfusion). Professor Ohdan's transplant group analyzed the perfused liquid and confirmed the presence of large amounts of NK cells. With the approval of the ethics board, the Professor regulated and cultivated the lymphocytes of the extracted NK cells in a cell therapy lab, and on the third day of surgery, administered the liver-derived lymphocyte cells to the recipient (patient) via intravenous drip. In 14 cases of clinical treatment, there has not once been a confirmed case of either adverse effects or cancer recurrence as of current.

NK cells derived from human livers differ from NK cells derived from peripheral blood in that it has been confirmed that they are able to induce the strong anti-tumor agent TRAIL (tumor necrosis factor-related apoptosis inducing ligands), a molecule which attacks cancer cells without damaging healthy cells. This is the result of a maintained research environment and countless live liver transplant surgeries by former Professor Toshimasa Asahara (current President of Hiroshima University). It was the moment that the results brought about by a fusion steadfast fundamental research and pathology bore fruit. This also led to the development of a sterile and effective collection system of NK cells from the perfused liquid. It has been nearly 5 years since that day. Professor Ohdan recalls that as a result of researchers and doctors who preferred diligent research and of those who preferred bedside care each doing their very best, they were able to work as a group in perfect balance, which led to the discovery of these wonder cells. 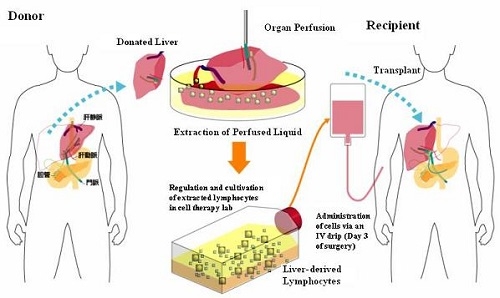 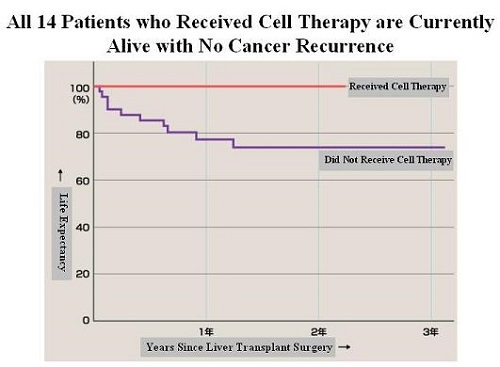 When Will This Supporting Role Take the Lead?

It has also been discovered that these NK cells inhibit the proliferation of Type C Hepatitis (Hepatitis C) post-operation, and currently research into using these cells as a preventative cell therapy for Hepatitis C is progressing (patented). "Over 70% of liver cancer patients also suffer from Hepatitis C. Although liver transplant plays a vital role in preserving the lives of patients with severe cirrhosis of the liver from Hepatitis C in combination with liver cancer, the reoccurrence of Hepatitis C post-operation is unavoidable, and the long-term prognosis when compared to patients who received liver transplants for other illnesses remains poor. It has also been shown that immunosuppressive treatments undertaken to prevent rejection of the donated organ can increase proliferation of Hepatitis C and aggravate existing hepatitis," explains the professor, but his bright expression makes me believe that good news is soon to come for Hepatitis C patients.

1. Through translational research (*3) aimed at the international level, turn fundamental research into clinical applications, and then employ these applications in local medical treatments as quickly as possible.

2. Use these activities as a cornerstone in expressing the appeal of surgery, and cultivate human resources who are not satisfied with current knowledge and techniques and will aim to put safer and more effective anticipated medical treatments in place.

He speaks of the strong determination it takes, that students must not be negligent in posing new questions and gathering information, must continue to proactively engage in mutual exchanges with related institutions as part of striving to improve the quality of medical treatment, and must spare no effort in continuing realistic and focused medical treatment, diagnosis, and research efforts.

However, the professor also states that, "It's not doing something special for the sake of it being special - if you continue doing leading research, the results will come back to the people of the community through doctors, and bright researchers will come together here. At the May 30th American Society of Transplantation Conference, my research thesis was chosen as one of the 'What's Hot' topics (awarded to research presentations which become hot topics during the conference), and there was a joint research proposal from the University of Miami to use this pathology." Plans to send a doctor to Miami are currently underway.

(*3)Team research with the aim of putting new discoveries through fundamental research to clinical use (developing revolutionary diagnostic and treatment methods for the next generation).

Natural Killer Cells are just as their name implies: they're killers by nature. As a current hot topic, you often hear about these NK cells which compose 15-20% of the entirety of lymphocytes. Just like the other immunocytes T cells (70-80%) and B cells (5-10%), they do not move as a result of stimulus by antigens, rather they constantly are on patrol inside the body for cells that have been infected with viruses such as cancer cells or influenza. Once found, immunocytes independently destroy the infected cells. Cancer cells are produced everyday, even healthy people; however, if the functions of their immune system, such as NK cells, are working properly, then they will not immediately develop cancer. On a related note, NK cells are at their peak of activity around age 15, after which time they age along with decreasing. If a person remains in good health by refraining from smoking, drinking in moderation, getting enough good quality sleep, exercising, eating a balanced diet, and relieving stress, then it is possible to increase NK cell activity. However, of all these activities, it is said that laughter is the most effective thing you can do to keep your immune functions active. Seems that laughter not only soothes the soul, but is good for your body too!

The focus of this edition of ResearchNOW was Professor Ohdan, who, as you may already know through newspaper and television news, has just completed a simultaneous pancreas and kidney transplant operation with lasted over 10 hours on August 30-31. He was pushed to the very limits of exhaustion under a long and hard schedule under extreme pressure. After performing extirpative organ surgery (pancreas and kidney) at Tokyo Medical Center, he then transported the organs to Hiroshima via airplane and taxi, performed the transplant surgery, attended a press conference, and managed the postoperative care of the patient. He was called out and his phone rang several times during our interview, however despite this, he answered all of my questions with a bright smile from start to finish, and I almost forgot that his tension-filled days were not over yet. Hiroshima University Hospital was recognized as an operation site for pancreas transplant and pancreas-kidney transplant from a brain-dead patient on February 18, 1999, and is currently the only hospital with such recognition in the Chugoku area. This is the 74th brain-dead transplant in Japan, and the 38th instance of simultaneous pancreas-kidney transplant in the nation. While organ transplant laws were established in 1997, the majority of those transplants are live transplants, and compared to the United States, organ transplants from brain-dead patients are far from commonplace. Under these circumstances, Professor Ohdan's simultaneous pancreas-kidney transplant from a brain-dead patient is the first surgery of its kind in the Chugoku-Shikoku area. Professor Ohdan, I would like to thank you for taking time out of your difficult schedule for this interview. (O)